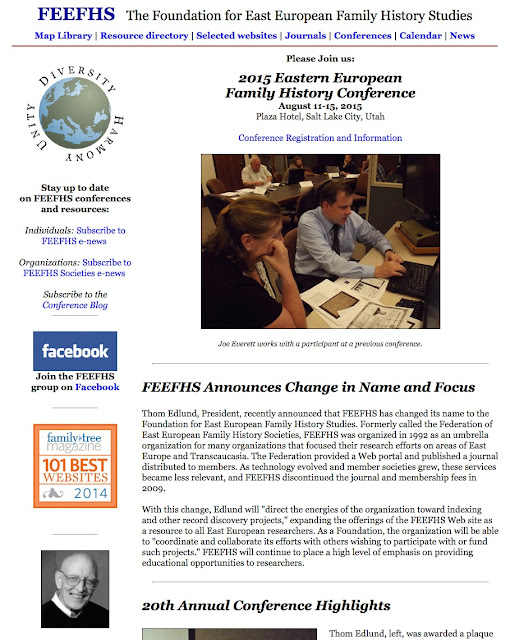 If you have ancestors from Eastern Europe, I have found that the website of the Foundation for East European Family History Studies (FEEFHS) is one of the most valuable websites presently available. The Annual Conference of the FEEFHS will be held August 11th to the 15th at the Plaza Hotel in downtown Salt Lake City, Utah. In conjunction with the conference, they have made the following announcement:


Curious about your ancestors or distant cousins that lived in Eastern Europe during Nazi Rule?  The Foundation for East European Family History Studies (FEEFHS) invites you to attend two special guest lectures during their upcoming conference.  Diane Afoumado, Ph.D., and Ina Navazelskis, MSc, MA, both from the United States Holocaust Memorial Museum (USHMM) in Washington, DC will be presenting on topics of interest to anyone with ancestors of Eastern European origin, Jewish and non-Jewish alike.

Ms. Afoumado will be presenting “How the Records of the International Tracing Service (ITS) May Surprise You” at the opening plenary session, Wednesday, August 12th, at 7:15 pm.  The ITS collection contains diverse information about the persecution and murder of Jews and non-Jews — Poles, Ukrainians, Lithuanians, Latvians, Estonians, Soviet prisoners of war, Roma and Sinti, homosexuals, Jehovah’s Witnesses, and persons with disabilities — under Nazi rule.  Diane is Chief of the Research and Reference Branch of the Holocaust Survivors and Victims Resource Center.  She will also be available throughout the remainder of the week for one on one consultations by appointment; you may schedule a time to meet with her following her presentation.

Ms. Navazelskis will be giving a brown-bag lecture, “Oral History Interview Collection, US Holocaust Memorial Museum,” at 12:15 pm, Friday, August 14th.  A journalist with 30 years experience in East European affairs and modern history, Ina has worked with the Oral History Branch of the museum since 2001.  Her presentation will introduce you to the Oral History Archive, designed to document and preserve testimonies as primary sources for future generations to hear and see the people who experienced, witnessed, or perpetrated the genocidal policies and crimes of the Germans and their collaborators.Both presentations will be held in the Aspen Room, lower level of the Salt Lake City Plaza Hotel, 122 West South Temple, Salt Lake City.  No tickets are required; lunch not included. Additional background and program information may be found at feefhsworkshop.org.

The Foundation for Eastern European Family History Studies (FEEFHS) was founded in 1992 to provide access to genealogical resources and educational programs relating to Eastern European family history research. They sponsor an annual conference focused on Eastern European genealogical research, featuring some of the nation’s leading experts in German, Jewish, Polish, Austro-Hungarian, Russian, and specialty focus areas of research. Additional information may be found at feefhs.org.