My own handwriting has disintegrated into the failing category. I used to pride myself on writing legibly, but over the years, because of constant computer use, my handwriting has now become undecipherable. Unfortunately, that is probably the general state of handwriting today. From time to time I have commented on the erosion of the teaching of cursive writing in schools across the country and I am sure that there is still a steep decline in the ability of today's children to use handwriting at all, much less to any passible level. As genealogists, we are confronted with the need to read handwritten documents, in fact, the whole culture of FamilySearch Indexing is organized around the idea that there is still not an adequate way to read handwriting by computer and that human intervention is necessary.

I guess there is a trade-off. Older genealogists are forced to learn computers and the "youth" have to learn to read cursive. Did you know that here in the United States, we have a National Handwriting Day? It was established in 1977 and is celebrated on the 23rd of January, the birthday of John Hancock. See "A Brief History of Penmanship on National Handwriting Day."

From the standpoint of someone who learned cursive in grade school, I can say unequivocally that learning modern cursive was not much help in learning to read old handwriting.  Most of my ability to decipher old handwriting was a later-acquired skill. If you would like to get started in reading old handwriting, may I suggest the following books:


Cope, Emma Elizabeth Thoyts. How to Decipher and Study Old Documents: Being a Guide to the Reading of Ancient Manuscripts. Salt Lake City, Utah: Filmed by the Genealogical Society of Utah, 1978.

I have mentioned these before, but they should be remembered every time this subject comes up. Here are some online tutorials for learning old handwriting systems.

There are some of the very old documents that almost defy transcription. Not only are the scripts hard to read, they are usually written either in Latin or a now defunct language. There is really no substitute for practice. I usually approach old unreadable script by looking at the document for half and hour or so and then putting it aside. I pick it up again the next day and try and read some of the letters or words, but put it aside again after another half hour. I keep repeating this routine until the letters start to make sense. This can take more than a few days, sometimes weeks. Your mind needs time to assimilate the shape of the letters and the words.

No matter whether you write cursive or not, deciphering old script can be a challenge. Here are some examples of handwritten documents from the past, going back about 100 years at a time. I decided to use some Catholic Parish Registers from Puerto Rico to start out, since these are what I have been looking at lately. 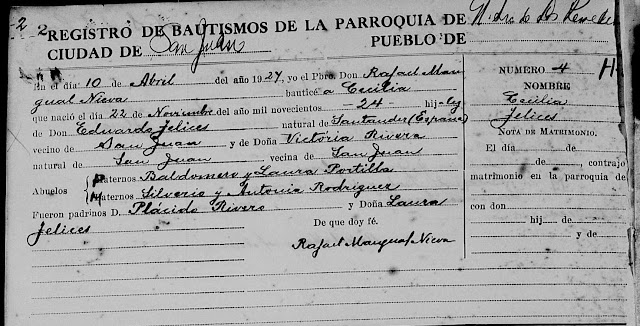 Even if you are not familiar with this person's handwriting, it is most legible and fairly easy to read. Unless you know Spanish, the record might be a little harder to decipher. Here is the next document from the 1800s: 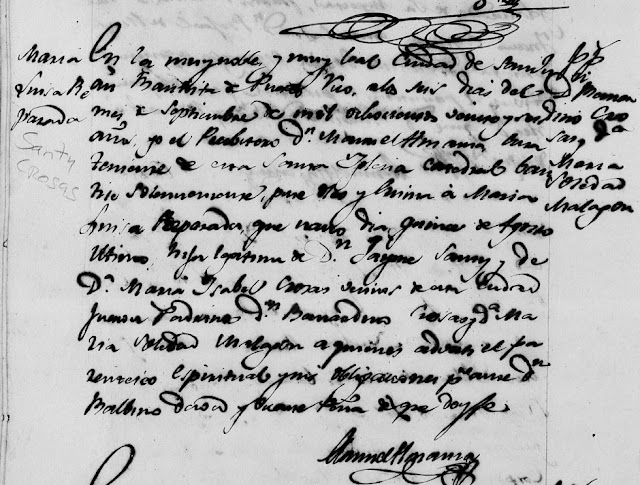 As you can see, 100 years makes a lot of difference. With this example, you have multiple challenges. The handwriting is a lot less legible and since the form is missing, the entire entry has to be examined carefully. Even if you could read cursive very well, this second example would be a challenge. This is one reason I think the learning vs. not learning cursive in grade school is somewhat of a red herring for genealogists. Now, lets move back another 100 years to the 1700s: 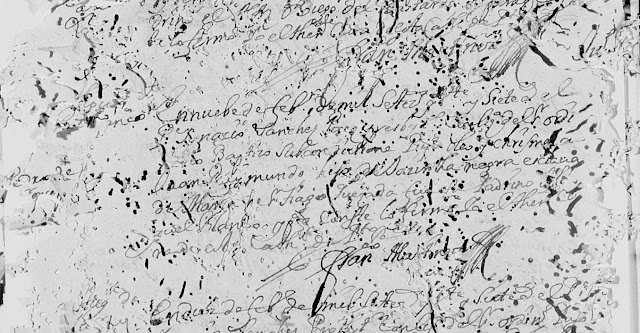 We are now back to a time period when the records themselves become the challenge. This book has disintegrated so much that a considerable portion of the text is unreadable under any circumstances. I selected one of the more complete entries for this example. Actually, the handwriting is pretty easy to read, assuming, of course, that you read Spanish and are also familiar with the handwriting practices of the 1700s. What do you think we will find in the 1600s? Here is the entire page from 1645. Can you read this? You can click on the image to see a larger example, if you wish. 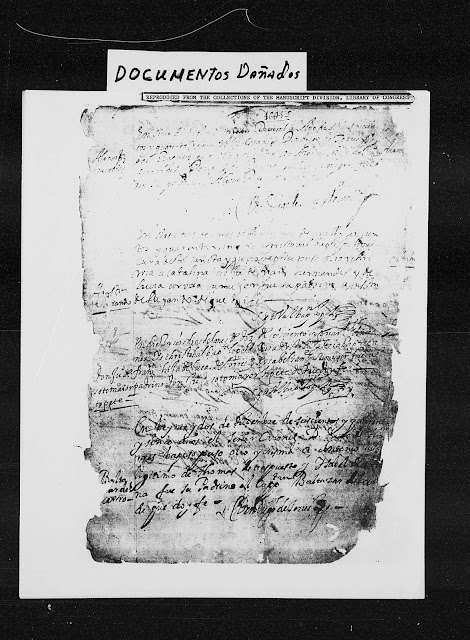 Clue: It is in Spanish. Just in case you are wondering, this is still fairly easy to read (for me). I have seen much worse. The quality of the handwriting is one of the main issues. The second challenge is the contrast and whether the ink is visible.

Shall we go back another 100 years? If I do, I have to change to another type of record. These are the earliest images in the FamilySearch Historical Record Collections from Puerto Rico. Here are some marriage records from the Archdiocese of Mexico in the early 1500s: 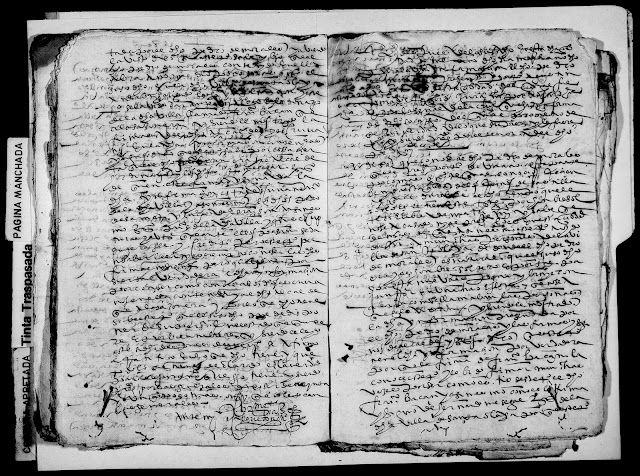 It has been a while since I have worked on this early type of record and this example would take me a while to work on. I can pick out the words, but I would need a few hours to start to read this record. What about you?

The point of this review is that reading old records is a skill that must be acquired. It is not necessarily related to your own personal ability to write in cursive. It does require you to be able to read and to be skillful enough to read in Spanish (or whatever). It is helpful to get a tutorial on old Spanish handwriting because some of the forms of the letters are unfamiliar.

Do I think children should be taught to write cursive? Whether I do or not, I do not think that learning to write in cursive helps you very much to decipher old handwriting. Deciphering old handwriting is a completely different skill that requires quite a bit of work and experience.