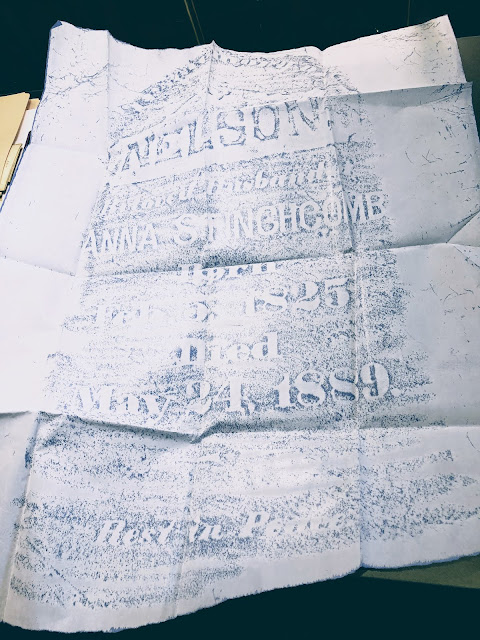 Many of the "traditional" ways of preserving the information on tombstones or headstones in a cemetery are destructive and ill-advised. For example, here is a quote from the 2016 New Hampshire Revised Statutes, Title XXVI - CEMETERIES; BURIALS; DEAD BODIES, Chapter 289 - CEMETERIES, Section 289:22 - Stone Rubbings.


289:22 Stone Rubbings. – No person shall make gravestone rubbings in any municipal cemetery or burial ground without first obtaining the written permission of the town selectmen or the mayor of a city or designee. Before granting such permission, the selectmen or mayor will ascertain to the best of their ability that the person making the request knows the proper precautions to be taken and the proper materials to be used for this activity. The town selectmen or city mayor or their designee shall notify the cemetery trustees of the request and its disposition. Any person who violates the provisions of this section shall be guilty of a misdemeanor.

I ran across this statute in a blog post that did not quote the statute but claimed that making Stone Rubbings was illegal in New Hampshire. Obviously, it is not, but it is regulated. I have also read several references that claim that gravestone rubbings are "illegal" in Massachusetts. I did find the following section in the General Laws, Part IV, Title I, Chapter 272, Section 73:


Section 73. Whoever wilfully destroys, mutilates, defaces, injures or removes a tomb, monument, gravestone, American flag, veteran's grave marker, metal plaque, veteran's commemorative flag holder, commemorative flag holder representing service in a police or fire department, veteran's flag holder that commemorates a particular war, conflict or period of service or flag, or other structure or thing which is placed or designed for a memorial of the dead, or a fence railing, curb or other thing which is intended for the protection or ornament of a structure or thing before mentioned or of an enclosure for the burial of the dead, or wilfully removes, destroys, mutilates, cuts, breaks or injures a tree, shrub or plant placed or being within such enclosure, or wantonly or maliciously disturbs the contents of a tomb or a grave, shall be punished by imprisonment in the state prison for not more than five years or by imprisonment in the jail or house of correction for not more than two and one-half years and by a fine of not more than five thousand dollars. In addition, the court shall order any person convicted of an offense pursuant to this section to pay restitution to the owner of the property that was damaged, destroyed, mutilated, defaced, injured or removed.

I don't see anything in the statute that applies to gravestone rubbings assuming the grave marker was not damaged. Here is a link to an extensive article discussing the pros and cons to gravestone rubbings: "A defense of grave rubbing: fun but controversial." It looks like the writer of the article check some of the same sources I found online.

OK, the image I have above shows a rubbing done with a new technology. The media is Carboff Paper. It seems to be available only from a few sources online, but it is specifically designed for use on stone or other materials without leaving any residue or damaging the surface. However, the physical act of copying a stone inscription can cause damage.

I guess I would suggest that you obtain the permission of the owner or caretaker of any cemetery markers you wish to preserve in this way. I would also suggest that photographs are probably more appropriate. But I cannot find any reference to a statute that makes the activity illegal per se.

If you are aware of the statute please leave a comment and give a full citation to the current state or local law.
Posted by James Tanner at 4:13 PM