Bicycles, Canals, and the MyHeritage LIVE Conference in Amsterdam 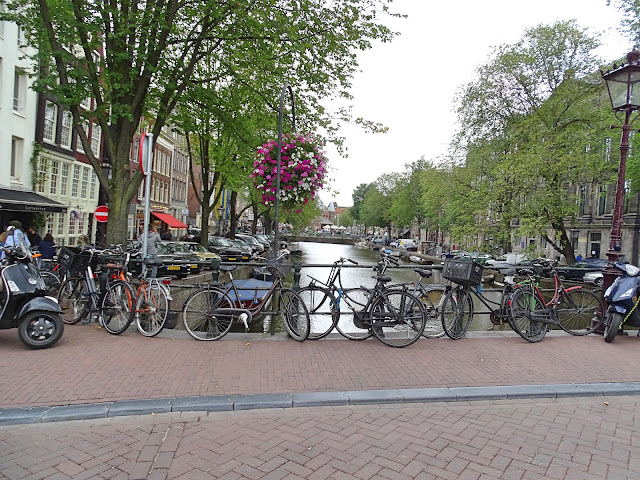 We have arrived in Amsterdam a few days early for the MyHeritage LIVE Conference on September 6th through the 8th and have taken the time to see some museums and the sights around the city. We have already seen the windmills, the Ann Frank House, the Rijksmuseum, and the Botanical Garden. We also spent a day just walking around the downtown area but we still have some time to see more before the conference. We have enjoyed the beautiful and very busy city of Amsterdam.

The two most obvious things we see everywhere are canals and bicycles. The bicycle traffic is constant. When you cross a street, you need to look both ways in the bicycle lanes on both sides of the street. Bicycles have the right away and they don't stop for pedestrians. There have to be a lot of bicycles in this city. According to Amsterdam Facts:

We haven't seen too many of the .91 bicycles but we have seen a lot of the rest. The bicycles also travel very fast.

Although we lived many years in Mesa, Arizona and are accustomed to canals, the Arizona canals are not nearly so plentiful or beautiful as the Amsterdam canals. In the older parts of the city, you cross a canal every few blocks. Additionally, Amsterdam is amazingly clean for a large city although we do see and have seen the ever-present graffiti all over Europe including in Amsterdam.

The number of people in the downtown is remarkable. We saw the same crowds in Madrid, Paris, and other cities. When you come from the Phoenix, Arizona area, seeing anyone on the streets is unusual and even after living almost my entire life in Phoenix/Scottsdale/Mesa, the only crowds I have seen in the downtown areas are during parades and other special events.

We are looking forward to the Conference. We hope to see some of you there.