Changes in the World of Unanswered Questions: Still no answers 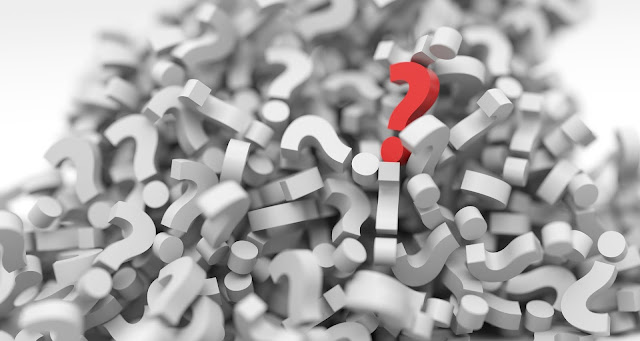 Back in 2012, I wrote a short blog post entitled, "Unanswered Questions." Then, in 2017, I wrote a blog post entitled, "More Unanswered Questions."  As I mentioned in the 2012 post, when I do a presentation, I usually ask everyone before I start whether or not they have any questions about the known or unknown universe. Occasionally, I will get a question or two but usually, everyone just sits there and stares. I have lots of questions and I know some of them are unanswerable. Now it is time to again look at some of the questions and topics I wrote about in the two previous blog posts and discuss why they are still unanswerable.

Back in 2012, I asked the question: "Which of Adam's children are you descended from? Can you document your sources?" That was a little over seven years ago. Has any progress been made in documenting sources? Is the genealogical concept of "back to Adam" still a current issue? The intent of both of the parts to that question was to point out the futility of accepting any of the commonly circulating pedigrees that purport to take you line "back to Adam."

In 2012, I did a search on the FamilySearch.org Family Tree for a person named "Adam" who lived in a place called "Eden" and had a wife named "Eve." There were quite a number of responses. From time to time, I have made the same search with the same results. Here is a screenshot of the current results of about the same search: 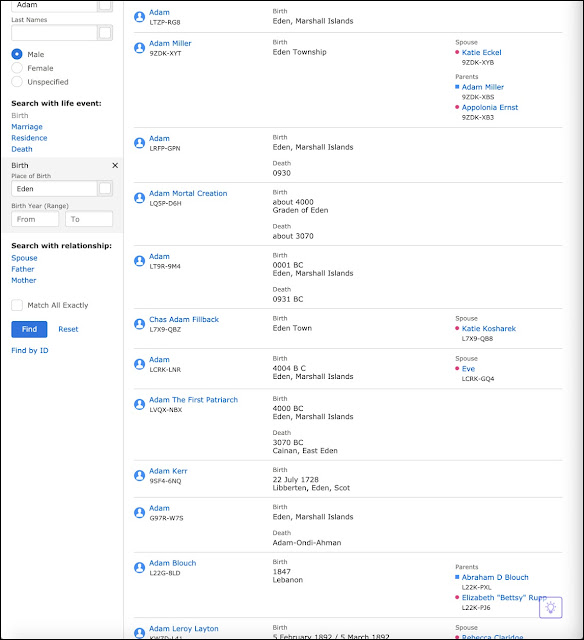 If I add in a wife named Eve, here are a few of the results from the new search: 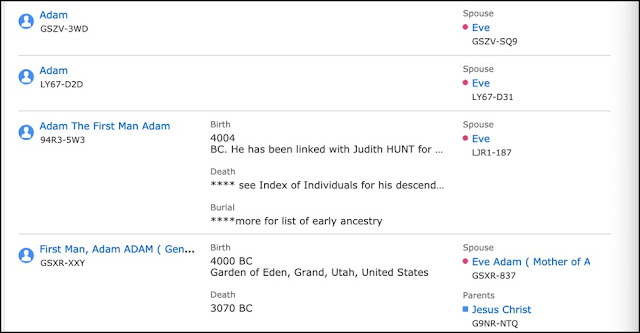 I was interested in the one entry placing the Garden of Eden in Utah and in a specific county. Since Grand County was founded in 1890 and is the county where both Moab and Arches National Park are located, I can understand why you might think Eden was associated with that county but historically, I think that locating Eden in or near Moab lacks historical support. I am also intrigued by the entries that place Eden in the Marshall Islands. This is likely just another editorial and promotional reference that ignores the difficulty a 4000 BC Adam and his descendants might have had in crossing the Pacific Ocean.

The real questions here should be: How long are we going to put up with bogus, imaginary genealogical entries in online family trees? Who in the real world of academic-level research will take us seriously when we have entries such as these in our online. collaborative family trees?

My next question is from the 2017 blog post and asks: How many genealogists does it take to change a lightbulb? This question is really a commentary on the technological changes confronting all of the world's genealogists. As I pointed out in my comment in that blog post, our descendants may not understand this question because they have never seen a lightbulb replaced. That day may still be in the future but this question opens up a lot of other questions about the impact of technology on both research in general and specifically genealogical research.

The light bulb question is really a follow up to my earlier question about how long it would be until I no longer heard the statement: "I don't have any computer skills." I am currently teaching a series of classes on mobile apps, including those directed at family history and genealogy. The main challenge I observe so far for most of the decidedly older people who are attending my classes is that they cannot operate their smartphones at all and they have no idea how to avoid the problem. This is the so-called "Digital Divide." The impact of technology on genealogy will only become more extreme with the addition of DNA testing and the tools being developed for analyzing those DNA tests.

Some of my questions were aimed at the issue raised by genealogy companies promoting their products and genealogy in general as easy, fun, simple, and similar terms. See the first question back in 2012: "If genealogy can be learned in five minutes, why are there 25 five-minute-episodes so far in FamilySearch.org's Learning Center?"

By the way, those 15-minute lessons are no longer on FamilySearch.org but there are a lot of other websites that have picked up on the idea of spending only 15 minutes a day and are emphasizing how easy it is to do genealogy. Granted, there are things you can do in 5 or 15 minutes, but most genealogical research is time-intensive.

My 2017 question about attendance at genealogy conferences is still a concern. I am seeing some conferences disappear, but other new ones being established. The issue is still valid and current, but so far despite some discontinuances and consolidations, conferences are still alive if not particularly well.

I will still keep asking questions and writing, for the time being, but one serious question is how long with blogs be relevant and viable. I am still seeing a dramatic drop off in direct blog readership. But when you add in all of the social networking outlets, readership is holding stable. Maybe it is me that is becoming irrelevant and not blogs in general? Now, that question needs to be added to the list.
Posted by James Tanner at 11:09 AM