Popularity on the FamilySearch Family Tree is not always productive 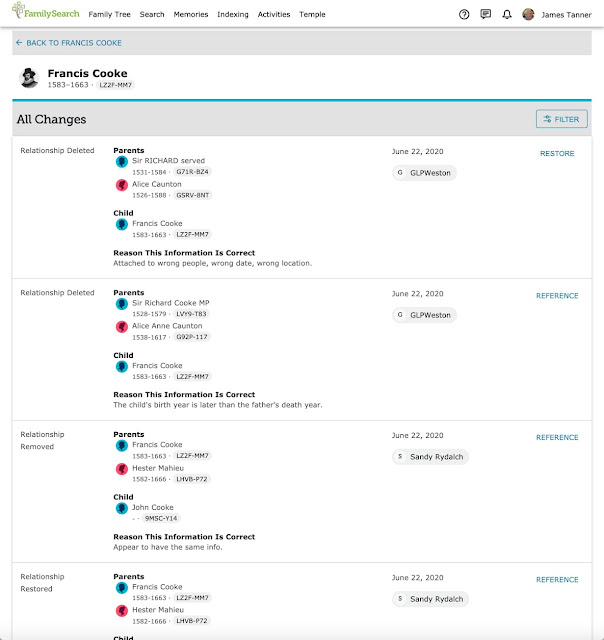 Every week I get an email report from FamilySearch.org advising me of the changes to people I am watching. If "watching" is a term you are not familiar with see "Watching, Waiting And Editing The Family Search Family Tree." Every week, almost without fail, my direct line ancestor, Francis Cooke LZ2F-MM7 has dozens up to in the hundreds of changes. Francis Cooke was a passenger on the Mayflower in 1620. He likely has hundreds of thousands of descendants. There are an estimated 35 million descendants of the surviving Mayflower passengers. Apparently very few of them seem to know more about him than the fact he arrived in America on a boat. Here is a screenshot of that part of the FamilySearch email showing me the changes for the week ending June 7th, 2020. 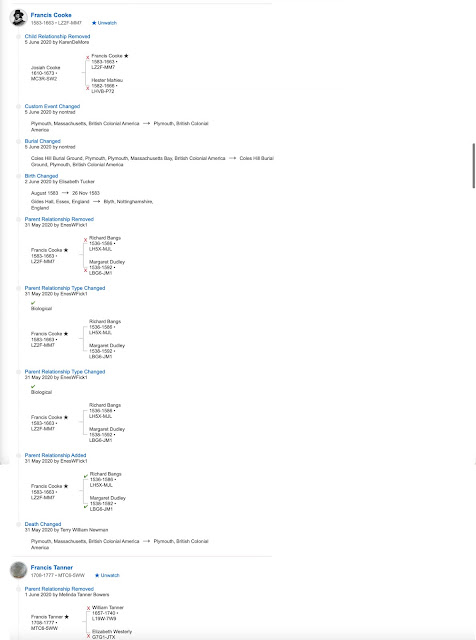 This was a relatively light week for changes. In this one week, child relationships were changed, Burial information was changed, his birth record was changed, Parents were added, and many other changes were made. In total, that week of June 7, 2020, with all the other changes, there was a total of 82 changes to 19 people. Most of those changes, 9 of those changes were to Francis Cooke.
Now, is Francis Cooke such a controversial person that all these changes reflect a lack of real information about him and his family? Far from that. In fact, there are probably relatively few people from the 17th Century who are as well documented as Francis Cooke. The General Society of Mayflower Descendants has been researching the 102 passengers on the Mayflower since it was founded in 1897. Of this original number, 45 of the passengers died during the winter of 1620-21. The lives and descendants for five generations have been exhaustively researched and published in a set of books known as the "Silver Books." The book containing information about Francis Cooke is in the twelfth volume of the series. Here is the citation for that book.
Wood, Ralph V., and Lucy Mary Kellogg. 2015. Mayflower families through five generations: descendants of the Pilgrims who landed at Plymouth, Mass., December 1620. Vol. 12 family of Francis Cooke.
These books are being digitized and made available online by the New England Historic Genealogy Society and the General Society of Mayflower Descendants. Here is a quote from the announcement.

New England Historic Genealogical Society (NEHGS) has partnered with General Society of Mayflower Descendants (GSMD) to bring new searchable databases created from authenticated Mayflower Pilgrim genealogies and from 50 years of published Mayflower passenger scholarship from the Mayflower Quarterly. GSMD members will enjoy generous discounts on new memberships in New England Historic Genealogical Society, the founding genealogical organization in America.
Known as the "Silver Books" because of their distinctive covers, the Mayflower Families Through Five Generations series from the General Society of Mayflower Descendants meticulously documents the first five generations of descendants of Mayflower passengers who arrived in 1620. This essential resource has previously been accessible only in print format. As a result of this partnership, the fifth generation portion of these will be available online on AmericanAncestors.org for use in family history research.
The "Silver Books" series is comprised of 31 volumes, of which the fifth generation of each will be brought online as a database as the digitization is completed. 50 passengers on the Mayflower are known to have living descendants, however, the “Silver Books” treat the 25 families that left American descendants.

OK, so why are there so many people out there making changes to a person whose five generations of descendants have been meticulously documented and when the documentation is readily available in libraries and online?
That is a good question. For some years now I have been working through all of my ancestral lines and purposely avoiding the Mayflower line. I have been watching the changes made to just one passenger, Francis Cooke, for years now. With the pandemic and the loss of all my direct contact with libraries and Family History Centers, I think it is now time to take on the Mayflower line. I actually have several lines that trace back to different Mayflower passengers, but this will be my test case. I have (or will have) complete access to the Silver Books and I can take a stand on the Family Tree and work my way back documenting every connection again and then when I reach Francis Cooke, I will start helping with the corrections. If you are thinking about changing anything that has been completely documented previously by the Mayflower Society, I would suggest having a second or third thought on this subject.
I am drawing a virtual line in the sand. I will be documenting my research here on this blog so if you want to help or question or criticize you will have an ample opportunity to do so.
Posted by James Tanner at 4:57 PM