Where was the event? Where are the records? 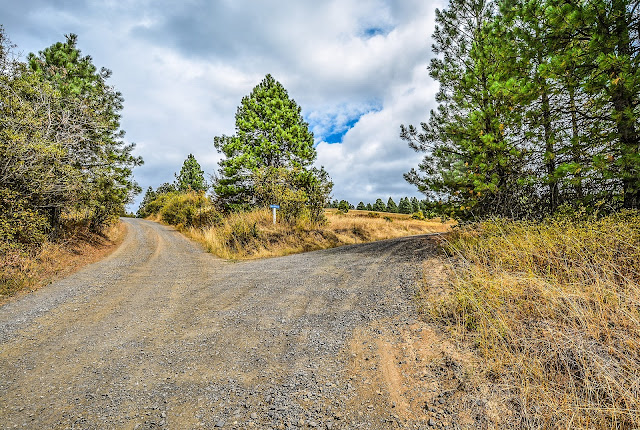 The questions in the title of this post are two separate but closely related issues. To start, I will repeat a general guideline for all genealogical researchers:

The place of an event in an ancestor's or relative's life should be recorded as it was identified at the time of the event.

I could state that principle a variety of ways but it means that before you enter the location of the event you should do some historical research to determine how the place of the event was designated at the time of the event. For example, Arizona became a state on February 14, 1912, and no, it is not called the Valentine's Day State, it is called the Grand Canyon State. If I were going to record and event, such as a marriage of one of my ancestors or relatives, that took place before 1912, it would be incorrect to designate the location place) of the event as occurring in the State of Arizona because no such place existed before February 14, 1912. Finding something as well known as the date of Arizona's statehood is not challenging but if you are looking at the establishment of Apache County in the State of Arizona, how many people might have to do some looking to find that information? Just so you know, Apache County was created on February 14, 1879, well before statehood.
Identifying the place as it existed at the time of the event gives genealogical and historical researchers a place to start looking for records of the event. So this is the connection between recording the place an event occurred and finding a record of that event.
So, for example, let's suppose I am looking for a christening date and I find a christening record with the date of the event. How would that be recorded? Here is an example of the source for a christening date and place for one of my ancestors whose name is James Parkinson.
Christening 16 July 1826
Ramsey, Huntingdonshire, England, United Kingdom
Is this enough information to find the record that I looked at? Well, it might give you a start at finding the record but was is also important is that I identify the "source" or place where I found the record. Here is an explanation of the source for that christening record with an image of the record itself.

From the Parish of Ramsey, County of Huntingdon, the parish record of James Parkinson's baptism (Christening) into the Church of England.
This same record also records his actual birth date.
It reads James son of Charles and Hephizbah Parkinson  born:
October 22, 1808
Baptized (christened): 16 July 1826
Abode is listed as the Parish of Farcet.
Dad (Charles) profession is listed as a Labourer.
It is interesting to note that even though the family lived in the nearby Parish of Farcet, James was christened in Ramsey.
At the time of his christening James was 17 years of age, almost 18. 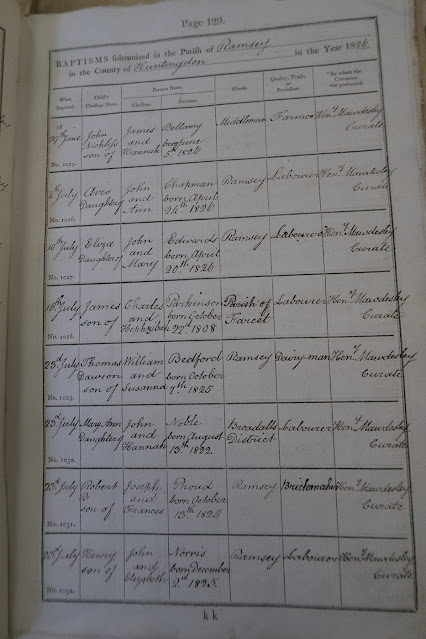 Is that enough? Well no, actually none of what I have said tells anyone where I found the record. Did I go to Ramsey and look in the parish church? Perhaps, but it is more likely that I found a copy of the record online. It is possible that given the location of the record in Ramsey, Huntingdonshire, England, I could find the record but life would be much simpler if I just recorded the place where the record was found.
The citation in the FamilySearch.org Family Tree where this ancestor's records are located is the same as quoted above:
Christening 16 July 1826
Ramsey, Huntingdonshire, England, United Kingdom
If I were a very astute researcher, I could probably find the record quickly somewhere besides spending the time and money to go to England. But what if England happens to be the only place this record is found. I could spend a great deal of money and time looking for the record here in the United States before I realized that the only location where the record could be found was in England in the Ramsey Parish.
Now, what about the source? Even though there is a digital image of the parish register showing the entry for James Parkinson, there is nothing that tells me where I might find a copy of the same parish register. Why would I like to see the parish register? The first reason is to find more people in the same family. The second reason would be to see if there was something that explained why this person was christened when he was 17 years old.
If I do a quick check of the records on FamilySearch.org, I find that the parish registers for the Ramsey Parish are only available at the Family History Library in Salt Lake City, Utah which happens to be closed for the pandemic that is raging across the world at the time I am writing this post. Where did the person who posted the copy get the image? In this case, after investigating I find out that the person may have gone to Ramsey and personally taken a digital image with his camera of the original parish register. Hmm. So my hypothesis of having to travel to England is not so far fetched as it may otherwise seem to be.
In this particular case, James Parkinson emigrated to Australia with his family so finding them in the parish register after 1849 when they left England will not be possible. If I look at the death information for James Parkinson, I can see this:
Death 2 September 1870
Brookfield, New South Wales, Australia
So why is there such a big deal about recording where the records are found? In this case, a quick search on Findmypast.com shows that there are approximately 17,361 records for men with the name of James Parkinson and a birth date + or - two years in England on Findmypast.com. How do we tell all of these thousands of people with the same name apart? We don't without careful attention to the exact location of the events in each person's life. In addition, when someone does something unexpected, such as moving from England to Australia, without careful attention to each place where the person lived you would quickly lose the family completely. For example here the note above with the parish register says that this person lived in Farcet, England. We can track him to Australia because there is a New South Wales, Australia, Assisted Immigrant Passenger Lists, 1828-1896 entry for the following:
Name: James Parkinson
Birth Year: abt 1807
Age: 42
Arrival Date: 13 Mar 1849
Vessel Name: St Vincent
Origin Location: Fassete, Huntington
This and other records showing specific locations assist us all in finding and tracing the movement of this person across the world. By the way, as also noted the parish register has his birth date:
Birth  22 October 1808
Ramsey, Huntingdonshire, England, United Kingdom
But without a specific location, in this case to a village in England with a current population of about 8,000 people, finding this person would be very expensive and very difficult. But as successive genealogical researchers carefully document their work, the records are finally located. Just in case you think this all took just a few minutes online, you might want to take a look at the following book, if you can find a copy.
Parkinson, Diane, and John Parkinson. James Parkinson of Ramsey: His Roots and His Branches : England, Australia, America : A Biographical History and Genealogical Record of the Family of James and Elizabeth Chattle Parkinson. Austin, Tex.: Published for the James Parkinson Family Association by Historical Publications, 1987.
The Parkinson family descendants of James Parkinson have spent thousands of hours researching and recording this family but without careful documentation, none of that work would have been productive and the research is ongoing.
Posted by James Tanner at 2:40 PM