By any other name -- FamilySearch

Quoting Allison Stacy, Publisher and Editorial Director of Family Tree Magazine in the March 2001 issue, "Another new development in the new year: You'll now see Family History Centers--the branches of the Church of Jesus Christ of Latter-day Saints' Family History Library so often referenced in Family Tree Magazine--referred to as Family Search Centers within our pages. Be sure to look for one in a city near you." It is true that on the old FamilySearch.org website had a statement that "Family History Centers are branch facilities of the Family History Library in Salt Lake City." It is also true that on the updated FamilySearch.org website the main page has a link to "FamilySearch Centers." See this screen shot below: 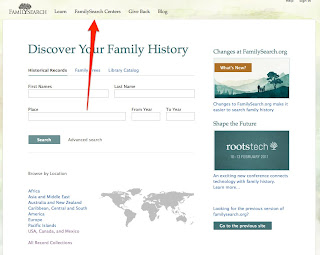 However, as recently as October when I was attending the Bloggers' Day at FamilySearch the issue of the re-branding of the individual centers was discussed and the response was inconclusive. We have discussed the issue at the Mesa Regional Family History Center and certainly have heard nothing about changing the name of the center. In fact, the Mesa Center has three commonly used names:
The FamilySearch Wiki has a rather extensive discussion of the Centers. According to the Wiki, "In 2010, the regional branch libraries were re-designated as "Large Multi-Stake FHCs" on the FamilySearch website." It is interesting to note that "The first Family History Center (FHC), then called a branch genealogical library, was organized in the Harold B. Lee Library on Brigham Young University Campus in May, 1964. Plans had been announced at October General Conference of 1963 to organize family history centers in Mesa, Arizona, Logan, Utah, Cardston, Alberta and Oakland, California, all adjacent to the temples in those cities."

I personally like the designation "FamilySearch Center" much better than Family History Center. The Centers are a place to come and search not a place where you come and they have your family history. Apparently, some one has informed Family Tree Magazine that the names of the various Centers will be changed. I don't believe we have heard anything about it.
Posted by James Tanner at 4:51 PM