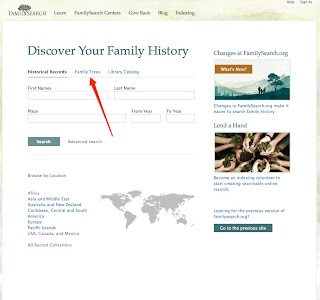 A comment made at the relatively recent January 2011 Bloginar caught my attention and I have been thinking about the consequences of the statement for the past week or so. The question was asked about the "Family Trees" tab on the FamilySearch.org main page. We have been speculating that the program presently called New.FamilySearch.org would be accessed from that link. Comments made last years seemed to indicate that the problems with New FamilySearch would prevent its being opened to the public at large anytime in foreseeable future. So the question was legitimate as to what was going to be added to the Family Trees link.


Presently, clicking on the link takes you to a search screen (outlined in red): 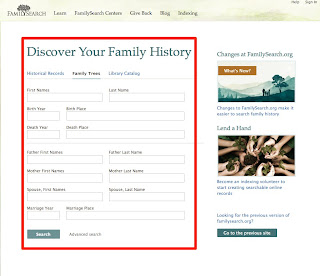 A search returns references to the name searched in a variety of databases, including the Ancestral File. The results of the search are clearly different than the results obtained from a search for the same name from the form on the main search page.

The answer to the question asked at the Bloginar indicated that FamilySearch was developing a "new" product that would allow users to store their genealogy information online (apparently with sources) and media. The new product would be Beta tested later this year and would allow members as well as the public at large to input their family information.

This certainly looks to me as if the effort to sanitize the New FamilySearch database for public consumption has been abandoned and that the new product will likely become the place to store and work with family files. Meanwhile, New FamilySearch will be allowed to perform its function of qualifying ordinance work and not become the main data storage and research area for family trees?

This idea seems to be supported by the relatively small incremental changes that have been made to New FamilySearch over the past few months. The most recent changes in December went almost completely unnoticed. The main addition being a "Watch" button that let users received an E-mail notice of any changes to a particular individual.

Time will tell. This all may be pure speculation on my part.
Posted by James Tanner at 6:55 AM