Tablet computers -- can you do real genealogy? 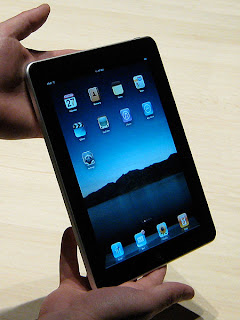 http://en.wikipedia.org/wiki/File:IPad-02.jpg Wikimedia Commons
Released in April of 2010, the Apple iPad sold 3 million devices in 80 days. It is about 9 1/2 inches by 7 1/2 inches and weighs 1.5 to 1.6 pounds depending on the model. It is estimated that Apple will sell 28 million or more iPads in 2011. We purchased an iPad shortly after its introduction. The machine is used primarily by my wife, but it has revolutionized the way she works and stores her information. Most recently, she has discovered that the iTunes program will load PDF files into the iBooks app. She can now print all of her work on the computer to PDF files and have them available to read or consult on her iPad. When I attended the first Bloggers' Day at FamilySearch in Salt Lake City, Utah, two of the twelve Bloggers used iPads to connect to the Internet and take notes during the presentations.

The devices are beginning to show up almost everywhere, from board meetings to church meetings. At the recent Consumer Electronics Show in Las Vegas, Nevada, many computer manufacturers announced tablet computers that they hoped would give Apple some competition. As of December, 2010, the Samsung Galaxy Tablet Computer has sold over a million units, making it a possible competitor to Apple. Apple will be coming out with an iPad 2 in mid-2011. According to TopTechReviews.net total sales of tablet computers could approach 100 million units in 2011.

With the huge application base of the iPad, even if other manufacturers make a "better" tablet computer, they will still have a hard time competing with Apple. From the manufacturing perspective, eBook Readers like the Amazon Kindle, are classed with iPads as tablet computers. There is a real issue as to whether the tablet computers released recently to compete with Apple are permanent products or will be soon abandoned if sales do not increase as expected.  But despite a huge number of nay-sayers before the iPad was released, it is apparent that the Apple product is here to stay in some form or another.

As genealogists, we can ask if these new tablet computers, like the iPad, are capable of doing real  genealogy or are better used only for viewing files? The answer lies in the hardware add-on capability of the tablet computers. The iPad has an optional full sized external keyboard that brings the machine almost to the level of a laptop computer. It certainly has the processor speed and storage capacity to function as a full featured computer with the proper software. As of early in 2011, there were eight different genealogy apps listed in the Apple iTunes store available for the iPad, including MobileFamilyTree, GedView, Reunion for iPad, FamViewer, Family Genealogy, Families, Name Maps for iPad and Research Logger.  Obviously, the Reunion for iPad works with the desktop version of that program, but the Families app is designed to work with Legacy Family Tree. The Families app claims that users have successfully displayed and edited files containing over 300,000 individuals on an iPhone.  There are reportedly genealogy programs that also run on the Google Android operating system. I have yet to see if any of the Windows compatible devices will run any of the existing genealogy software.

I guess my answer would have to be that yes, you can do real genealogy on a tablet computer and I assume that your ability to do so will increase dramatically during the next few years. There is presently a debate as to whether tablet computer might replace a significant segment of the laptop market over the next few years. If my own experience is any indication, I think most people who use a laptop and buy a tablet computer will end up using both. As for me, I like my MacBook Pro too much to switch to an iPad.

[Note: I do not have any affiliation with any hardware or software manufacturer. Mention of a product in my posts is my own personal opinion.]
Posted by James Tanner at 7:16 AM