When I was a lot younger than I am now, I was very interested in cars. I read car magazines and talked about them with anyone who would listen. My wife painfully tolerated this phase of my life. As an attorney I handled many car cases and got to the point where I knew the value, within a few hundred dollars, of any make or model of car then being sold or driven. I bought several unusual cars including a Jaguar. My interest in cars began to wane in direct relationship to the run-up in prices. Early on, I could purchase a foreign sports car for $3000 or $4000. Now the equivalent automobiles cost more than most people make in several years. In addition, except for the hyper-expensive models, all present cars are pretty much identical. I guess you could say I had an interest in cars like some people are interested in sports or movies.  Let's just say I couldn't care less about cars today.

When does an interest in something move beyond mere interest to become a passion or even an obsession? Frequently, you will see comments in genealogically related publications both in print and online, talking about the large number of people interested in their genealogy or family history. Here is a quote from Kimberly Powell in About.com Genealogy Blog entitled "Grow Your Family Tree in Salt Lake City."
Asking people if they are interested in genealogy is like asking people if they are interested in their mothers. The vast majority of people are going to say yes. But when does that so-called interest turn into something more? In the About.com Genealogy Kimberly refers to the "Traffic to popular genealogy Web sites" as an indication of interest.

Actually, there is some support for the idea that interest in genealogy is increasing if you look at the statistics from various Web watching sites. But the increased interest is not dramatic and certainly does not displace many other more compelling national past times. For example, take Quantcast.com, here is a graph showing the traffic to FamilySearch.org during the past year: 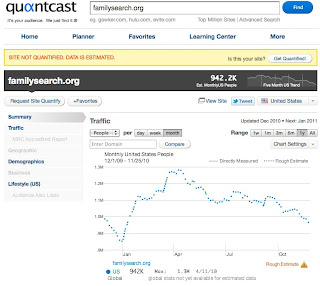 It is clear that interest in this website waxes and wanes based on the season of the year. Here is another example from Quantcast, Ancestry.com for the last year and half: 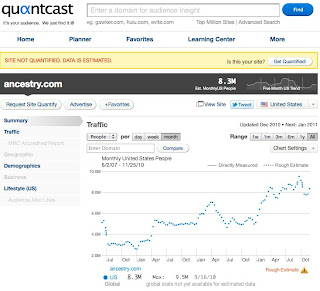 Realize that during this same time period, Ancestry.com made some major acquisitions such as Progenealogists and Genline. They also began a huge TV advertising campaign including a major TV show. It is true, Ancestry.com has millions of viewers.

How about New FamilySearch? Here is the graph for New.FamilySearch.org for the last year and half: 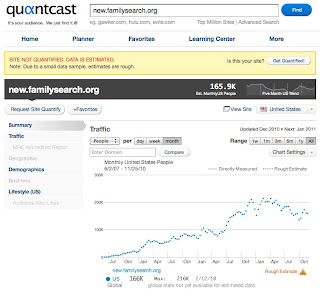 Those figures are in hundreds of thousands, not millions.

How do these figures compare to a major sports website? Let's take a look at the statistics for the National Football League's website, NFL.com: 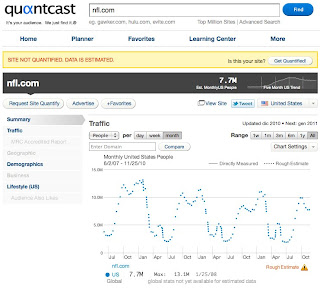 Those figures are in millions. It is estimated that 73 percent or so of the entire population of the U.S. watches the Superbowl Game.

In my own experience I would say that personally genealogy long ago moved from the interest category to that of an obsession. I now spend a major portion of almost every day involved in some aspect of genealogy, research, scanning, writing or studying. It is true that a significant number of people are interested in genealogy, but how many of them are passionate or obsessed with the subject? I would guess mighty few.

I would make another guess. The most popular genealogy website outside of the big databases, is likely About.com's Genealogy (genealogy.about.com) site. Here is the graph for that website for the last year: 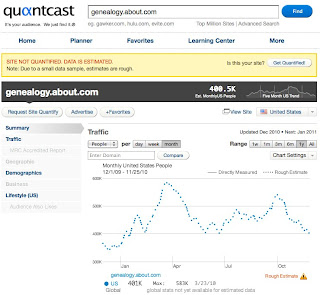 Those figures are in hundreds of thousands. Just for interest sake, let's look at WorldVitalRecords.com: 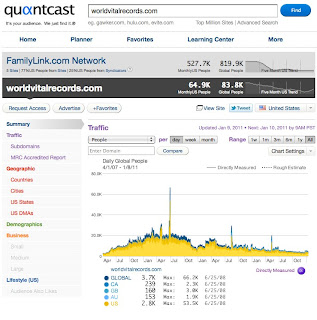 OK, so you are saying so what? I think we, as genealogists, need to admit that our interest, passion or obsession is not really shared by very many people. We need to balance our interests and not get so wrapped up in genealogy that we neglect our families and our friends. We also need to teach more and promote less. Even though there is an interest in family history, without a major amount of education on the subject, genealogy will remain only an interest.

I also think we need to realistically assess the real interest in genealogy and stop claiming huge increases in interest and realize that in reality, genealogy is only slightly more popular than bird watching.
Posted by James Tanner at 6:08 AM