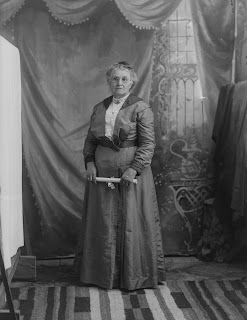 I will be working on digitizing and developing the glass and cellulose acetate film negatives from my Great-grandmother Margaret Godfrey Jarvis Overson. Since there are thousands of negatives and developed photos this project will go on for some time. This is a picture of Margaret Jarvis, my Great-great-grandmother and Grandmother Overson's mother. Margaret Jarvis was born in 1857 and died in 1934. She married Charles Godfrey DeFriez who changed his name to Jarvis when he got married to Margaret Jarvis. He apparently liked the Jarvis family so much he changed his name. I have to think there is a story in there somewhere that I haven't ever seen documented. So Margaret Jarvis was her maiden name also. Charles Jarvis (DeFriez) later changed his name legally in court to Jarvis.  If you didn't know any better, you would certainly think all this was a mistake in the records.
Posted by James Tanner at 3:19 PM