A Matter of Maps, Counties and History 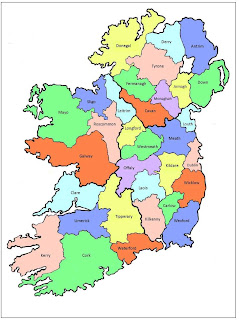 Yesterday, I had an interesting discussion involving Irish research. The researcher's ancestor apparently came to the U.S. as a domestic servant, likely indentured, at 12 years of age. Unfortunately, she had a very common name. Her arrival was in the early 1800s, possibly as a result of the Great Famine (Irish Potato Famine) of 1845 and 1852 or other economic conditions existing in Ireland before that time. The researcher believed that she had traced the young girl's departure from Ireland to a Dublin passenger list. After she reached America, she began to be well documented, so that wasn't the issue. The real issue was that there were three different candidates for her identity in Ireland from three different counties; Cork, Tiperary and Clare. In two cases, the candidates had the same names, similar birth dates and parents with the same names.

If you study the map above, you will see that all three counties are more or less distant from Dublin. If the Irish girl's parents were so poor as to send their 12 year old daughter off to America as an indentured servant, then how could they afford to pay her passage to Dublin? Did the indenture contract include passage from Southern Ireland to Dublin? Did the girl travel unaccompanied across Ireland? Was her immigration to America an attempt to save her life?

If the transport to America had been much earlier, it might have been a case of the girl being an Irish slave, many of whom were transported to the West Indies and ultimately to America in the 1600s and early 1700s. But in the 1800s declining potato prices and ultimately, the Famine, led to about a million people leaving Ireland for America.

Unfortunately, I did not have the time to get into more of the details of this immigrant's life. Perhaps I will get the opportunity. But the question of the three different girls with the same names is puzzling. It is very unlikely that the case is yet settled. Irish research can be very interesting, but very challenging. Sometimes, I only get a short snapshot and then move on to another question from another patron at the Mesa FamilySearch Center.