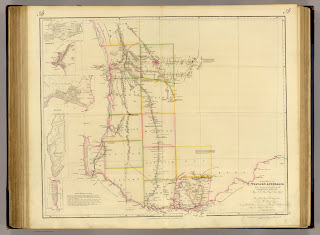 Discoveries in Western Australia from documents furnished to the Colonial Office by J.S. Roe Esqre., Survr. Genl. (with) Guildford. (with) Fremantle. (with) Perth. (with) Kelmscott. (with) Augusta. By permission dedicated to R.W. Hay Esqre., one of H.M. under secretaries of state for the colonies, by his obliged servant J. Arrowsmith. London, pubd. May 31st, 1833 by J. Arrowsmith, 35 Essex Street, Strand. David Rumsey Map Collection.

I have always wanted to travel to Australia. I have a niece who lives outside of Perth and some of my own ancestors lived in Australia before immigrating to the United States. Places in Australia are sort-of the same as in Arizona; most of the settlement came in the mid- to late 1800s. I think there is a general assumption among genealogists that the records of any country, other than the exact one where your ancestors lived, are not much use. I probably do need to point out that the largest ethnic groups in Perth, Western Australia are English, Australian, Irish, Scottish, Italian and Chinese. See Wikipedia: Perth. It is entirely possible that an elusive ancestor that "disappeared" from England or Ireland, ended up in Australia.

I can only assume that Western Australia suffers from the same distorted impression that much of the world has of Arizona. That it is all a desert wasteland. True, both areas have a lot of desert, but both Perth and Phoenix are huge and diverse metropolitan areas and a very diverse topography. One thing Arizona is missing is the thousands of miles of beaches as well as kangaroos. But then the Australian desert is missing our saguaro cactus.

From my own experience, Australia, including Western Australia, has a very active genealogical community. Here are a few links to societies and other organizations in Wester Australia:
Looks to me to a very active area for genealogy. Australia as a whole is greatly benefited by the National Library of Australia with their huge online website; Trove.nla.au.gov. This site ranks among the very largest and most valuable websites on the Internet and is almost in a class by itself. However, Western Australia also has a State Library with valuable genealogical resources. See the State Library of Western Australia. The State Library has an extensive online section on Family History. Here is a link to a list from the Australian National Archives of the Australian archival institutions.

You should also be aware of resources of the National Archives of Australia and its Family History online webpage. There are several publications that assist genealogists in Australia:
Here is a list of links to additional Australian resources:
You might also want to check into the Australian Joint Copying Project. The Genealogy Centre of the State Library of Western Australia holds nearly 5,000 reels of Australian Joint Copying Project microfilm. These reels contain copies of original records relating to Australia, New Zealand and the Pacific held at the National Archives at Kew as well as other libraries and archives in Britain.

Another source of records is the online subscription database findmypast.au by brightsolid.com. The Registry of Births, Deaths and Marriages of the Department of the Attorney General of Australia offers free online historic index searching of births, deaths and marriages from 1841. Here are some more useful sites:
Historic Death Index
Ancestry.com $$
The Ryerson Index
BDM Data Viewer
Obituaries Australia Hosted by the National Centre of Biography at the Australian National University, is a digital repository of obituaries published in newspapers, journals, magazines and bulletins. Here you will find the life stories of Australians from the earliest times to the present. There is also the opportunity to submit obituaries to this site.
Obits.com.au Australian death and funeral notices plus obituaries obtained from funeral directors or though contributions by members of the public. Notices are available from January 2006. The Obits Quick Search only searches recent notices so check the Archived Notices also.
The Last Post This site lists basic information about funerals as submitted by funeral directors on behalf of their clients.

Well, G'day and hope you have luck finding your Australian ancestry. See you on my next Travels on the Web.