Examples of Attempts at Name Standardization

In a comment to my recent post on standardization of place names, Tony Proctor made the following comment, "I don't know which software you're using, or which computer programmers have offended you James, but I'm afraid there are some rather large generalisations here." He is right. I purposefully avoided naming names and pointing fingers. But the point is well taken, perhaps a few examples would help to explain exactly what I am talking about. As another commentator pointed out, one program, Legacy Family Tree, actually informs you if you try to enter a county that was not in existence at the time of the event.

Both spelling correction and autofill commands are ubiquitous in current programs both online and locally resident. My Apple computer has a built-in spelling checker program that works anytime I am typing either into a program or online. From the standpoint of someone who writes constantly, this type of program is more useful than it is a bother. I am used to ignoring the suggested spellings if they are for the wrong word or if my spelling is preferred. You may notice that Tony's spelling of "generalisations" in the above quote, differs from the one commonly suggested in U.S. based spell checkers.

If the suggested standardized place names were nothing more or less than a spell checker, there probably would not a be a problem. But here, the use of the term "standardized" becomes an important factor. There is an implication from the use of the term alone that suggests that a change to the standard place should be made.

I am not going to give an exhaustive list of every program that suggests a standard place name, but a few examples, as Tony points out, might help with explaining the idea.

Who should I pick on first? Well, Ancestry.com is a big company and can probably take the heat. If you are using Ancestry.com's online Public Member Family Trees, you will run into the suggested "standard" place names anytime you enter a place into the program. Interesting, without the full suggested name, the program sometimes cannot find the place at all. Here is an example.

My relative was a resident of Salt Lake City, Salt Lake, Utah in 1930 according to the U.S. Census. Here is a screen shot of the residence information from Ancestry.com: 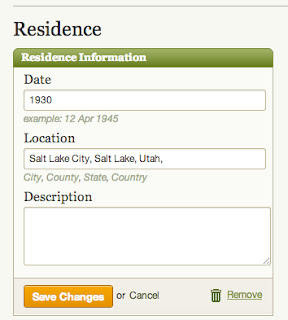 You will note that the location entry is exact and accurate. However, if I try to find this location by clicking on Ancestry.com's mapping program I see the following error: 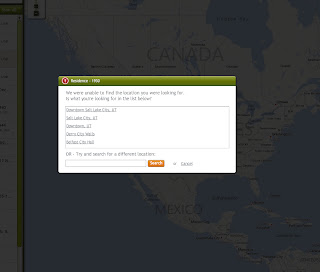 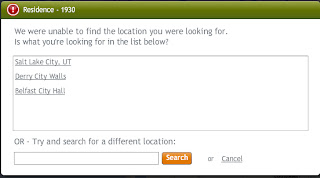 Oh yeah, I can now find the place, assuming that Salt Lake City, UT is the same place.

It is not that Ancestry.com is forcing me to use a standardized place name, but in suggesting the standard place every time I make an edit, if I didn't know better, it would be very easy to use the program just like a spell checker and accept the standard place name as the rule despite exceptions.

I could go on to list other programs with similar quirks, such as FamilySearch.org, but I think the one example is enough. The problem where Ancestry.com's map does not recognize its own standardized place name is really interesting.
Posted by James Tanner at 10:17 AM