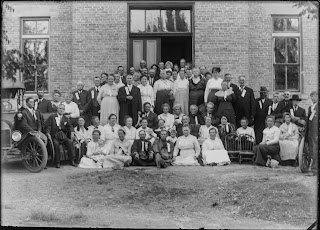 So the issue is what role do stories and photos play in acquiring information about family history? Now to the quote from page 7 of the 1997 edition:


In family history research, we begin with the present. The first steps in research include consideration of what is known about the family by observation or from the traditions and stories passed down through the generations. Conversations and interviews with family members, friends, former neighbors, and perhaps people familiar with the history of the local area supplement our own memories.

The text goes on to state:


First steps involve discovering these clues, organizing them into a coherent pattern, and then following them on what might be the most remarkable and compelling journey of your life: the reconstruction and preservation of your own family's history.

There is a pattern here we need to remember. First is the discovery of the stories and artifacts, including photographs, about our families, then comes the organization and finally, following the clues to the past to discover even more accurate and compelling information about our ancestors. Do you know the stories of your ancestors? Do you have photographs?

We are coming up on the thirtieth anniversary of the publication of The Source. Seeking out stories, photographs and other artifacts of family history has been going on for a really long time. Gathering these priceless stories and artifacts is at the core of what we do as genealogists. I think it is unfortunate that somehow the idea has become prevalent that genealogists are not interested in stories and photos and that if you want to have stories and photos, you need to do "family history" not genealogy. As a point in support of this concern, I can send you to the comments made to some of my recent blog posts on the subject. There are those who are adamant that there is a distinction between "family history" and mere name-gathering genealogy. As I have said before, I have been in meetings about family history where the introduction to the meeting included the statement that we don't have to be genealogists any more.

During the past few years, I have accumulated hundreds of thousands of pages of family history including stories, letters, diaries, journals and other vitally interesting documents about my extended family. During that same time, I have shared much of that history with family members through blog posts, posting photos and sending copies to interested family members. For example, in the Brigham Young University Library, L. Tom Perry Special Collections Library, I found a document about my Great-Grandfather entitled "Some of the Wit and Humor of Henry M. Tanner and Stories we heard around the Tanner Home." I am afraid that many of the stories would not be acceptable in today's world of political correctness but some of them are funny. It is interesting that some of those same stories were told to me by own father.

Let me point out something important about this example. First, I only found those stories after years of doing family research. The reason I found the stories was because I finally became aware of the need to search in university library special collections for stories about my own family. I also had to learn how to do that research and what to do with what I found. Second, some one had taken the time to preserve these stories in way that they could be found. Lastly, except for the fact that some of the same stories were still being told by my father, I had no idea that more of these stories were available until I did the research.

Do you see the connection here? It is the serious genealogical researchers who find the stories. They do not drop into your lap uninvited. Yes, stories and traditions can be a great motivating factor in initiating an interest in family history, but to down play or even denigrate the genealogical researcher's part in acquiring and preserving those stories and the photographs that go with them, is a serious error. Rather, I would suggest exploring how we transition the neophyte family historians to the point where they can do productive family history (read genealogy).