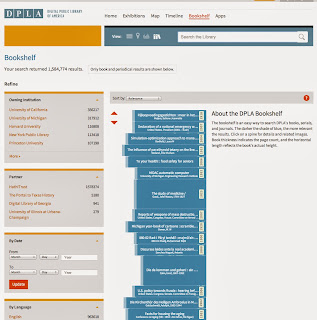 The total number of items in the DPLA collections has risen to 5,088,841 from libraries, archives and museums throughout the United States. Quoting from the announcement:

The DPLA Service Hubs are state or regional digital libraries that aggregate information about digital objects from libraries, archives, museums, and other cultural heritage institutions within their given state or region. Each Service Hub offers its state or regional partners a full menu of standardized digital services, including digitization, metadata, data aggregation and storage services, as well as locally hosted community outreach programs, bringing users in contact with digital content of local relevance.

For a more complete explanation of the content of the three major additions, please read the DPLA blog post.

In addition, the DPLA has added a new feature, the DPLA Bookshelf, an easy way to browse over a million books. Here is an explanation of the new feature:


When a user of the DPLA site searches for books, the results are displayed as books on a bookshelf; the shelf is shown as a vertical stack so that the titles and authors are more easily readable on their spines. The width of the book represents the actual height of the physical book, and its thickness represents its page count. The spine is colored with one of ten depths of blue to “heatmap” how relevant the work is to the reader’s search.

When a reader clicks on one of the books, additional information about it is displayed to its right. The reader can launch the e-book with the click of a button. Or, he or she can explore further by clicking on one of the subjects under which the book has been categorized. This replaces the existing shelf with a shelf containing all the other books in the DPLA collection categorized under that same subject.

Further, when a reader clicks on a book, the DPLA Bookshelf displays thumbnails of images within the DPLA collection related to that book’s subject areas. Clicking on a thumbnail displays the image and additional information about it.

This is an attempt to overcome one of the most common complaints about searching on the computer, the lack of context with other books on the same subject. I guess I can get used to searching vertically rather than horizontally, since I used to get a cricked neck trying to read the titles on a horizontal shelf.