The days of going to a library or archive and browsing for records has long past; if it ever existed at all. Most genealogically significant collections involves a fairly high degree of preparation and an additional amount of astute strategy to maximize the time and effort spent. Unless you happen to work in a major record repository, you will probably have to plan and execute a special trip to accomplish your research goals.

Now, once you have an idea of the place where records are kept, you need to understand that the way the collections within these locations are organized is somewhat arbitrary. There are, of course, some commonly used systems, such as the Dewey Decimal System, or the Library of Congress Classification System, but even these more common classification systems need to be understood before you can do effective and reasonably exhaustive research. Many of the libraries of the world have adopted a third alternative to the two older systems. This newer system is administered by the OCLC Online Computer Library Center, Inc.  Here are some short summaries of these three major classification systems and some resources for further study.

The Dewey Decimal System (DDC) of classification was developed by Melvil Dewey in 1873 and first published in 1876. Libraries all around the world use this system for cataloging their books, manuscripts, and other materials. The system is continually updated and maintained by the Decimal Classification Division of the Library of Congress.  A proprietary version of the system is also maintained by the OCLC Online Computer Library Center, Inc. which also operates the online WorldCat.org catalog.

Essentially, the DDC is organized into ten main classes. These classes are further divided into a second level called the Hundred Divisions. The third level of classification is called the Thousand Sections. Further classification is obtained by adding Arabic numerals and decimals of those numbers. Within a division the materials are further arranged on the shelves alphabetically by the last name of the author or other selected identifier such as the title or description.

Here are some further resource materials about the system.

Here is a description of the system from the Library of Congress website:

The Library of Congress Classification (LCC) is a classification system that was first developed in the late nineteenth and early twentieth centuries to organize and arrange the book collections of the Library of Congress. Over the course of the twentieth century, the system was adopted for use by other libraries as well, especially large academic libraries in the United States. It is currently one of the most widely used library classification systems in the world. The Library's Policy and Standards Division maintains and develops the system, posting lists of updates.

The system divides all knowledge into twenty-one basic classes, each identified by a single letter of the alphabet. Most of these alphabetical classes are further divided into more specific subclasses, identified by two-letter, or occasionally three-letter, combinations. For example, class N, Art, has subclasses NA, Architecture; NB, Sculpture, ND, Painting; as well as several other subclasses. Each subclass includes a loosely hierarchical arrangement of the topics pertinent to the subclass, going from the general to the more specific. Individual topics are often broken down by specific places, time periods, or bibliographic forms (such as periodicals, biographies, etc.). Each topic (often referred to as a caption) is assigned a single number or a span of numbers. Whole numbers used in LCC may range from one to four digits in length, and may be further extended by the use of decimal numbers. Some subtopics appear in alphabetical, rather than hierarchical, lists and are represented by decimal numbers that combine a letter of the alphabet with a numeral , e.g. .B72 or .K535. Relationships among topics in LCC are shown not by the numbers that are assigned to them, but by indenting subtopics under the larger topics that they are a part of, much like an outline. In this respect, it is different from more strictly hierarchical classification systems, such as the Dewey Decimal Classification, where hierarchical relationships among topics are shown by numbers that can be continuously subdivided.

Here are some additional resources about the Library of Congress Classification System.

Many of the catalogs of the repositories around the world have moved online. As a result, the OCLC Online Computer Library Center, Inc. WorldCat.org catalog has become a dominant method of cataloging their collections. The WorldCat.org online catalog has become the largest catalog in the world with over 2 billion catalog entries. Each of the items in the WorldCat.org is given and OCLC number. You can use this number to find the items in the catalog or to search online in Google. For example, the following book has the OCLC number of 35270040: 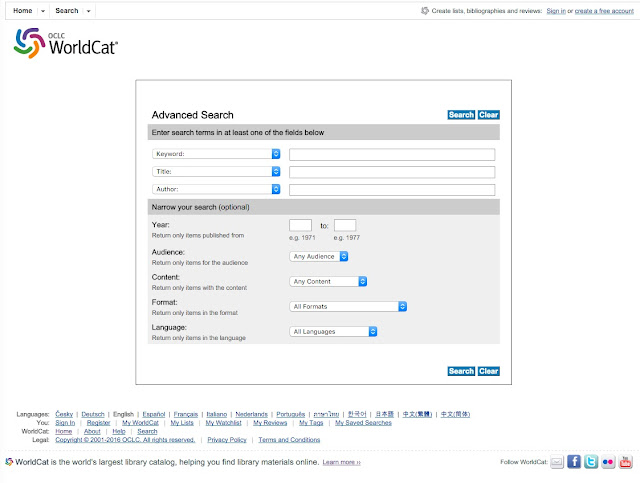 Before you physically visit the repository

Once you are basically aware of the method of classification of the repositories you may be using in your research, I am going to set forth a series of steps that I suggest you take before you travel to a repository to actually do the research. Here we go:

Take time to think through your research objectives. Choosing a goal such as "finding a birthdate for my 3rd great-grandfather" is not really a research objective. When you are beginning your research you need to focus on the types of records that may be available rather than specific events or identities you wish to find. When approaching a repository, you will need to ask this type of question: "What kind of document might contain birth information about my 3rd great-grandfather and does this repository have that kind of document?" Your research objectives should be very broad and encompass any possible types of information you might find at the remote repository's location.

Do extensive and exhaustive online searching before physically going to a repository. I hear a very common tale, particularly about visiting remote record repositories in Europe, where the researcher is told at the door of the repository that the records they are looking for are not available but they are in the collections of the Family History Library in Salt Lake City, Utah. You do not want to spend money and time going to a remote location only to find that the records are in the Salt Lake Library and what is more, they have been digitized and are online. This may seem like an urban legend, but I have heard this directly from a number of people who went to Europe and were told this by the repository's operators.

Visit your nearby libraries, archives and other repositories and look for your information. Be sure to use all their available online resources. The records you are searching for may not only be in Salt Lake City, they may also be in your local library. Don't forget to search in college, university and other educational institutions' libraries.