Reflections on the Findmypast/Mocavo announcement [Note: This post contains information gleaned from the Internet and my own personal opinions, observations and speculations.]

At one time, Mocavo.com was an upcoming competitor to the "Big 4" online genealogical database programs. They were acquiring new collections of records at such an astounding rate and I predicted back in 2014, that they would soon create the "Big 5." In June of 2014, Mocavo.com was purchased by Findmypast.com. The new announcement indicates that the present content of Mocavo.com will be "merged" into Findmypast.com. This move greatly expands the Findmypast.com database and helps it become a major supplier of unique U.S. resources in additions to its impressive records from England, Scotland, Wales, Australia, New Zealand and Ireland.

The termination of operation the Mocavo.com website is another incident in the ongoing evolution of resources on the Internet. It also highlights the economies of scale experienced by very large, online database programs. As shown in the following Google Trends graph, Findmypast.com has been running very close to Ancestry.com in the frequency of searches. The addition of substantial collections of primarily U.S. based resources should assist Findmypast.com to increase its market position even though Mocavo.com has a comparably lower level of online presence. 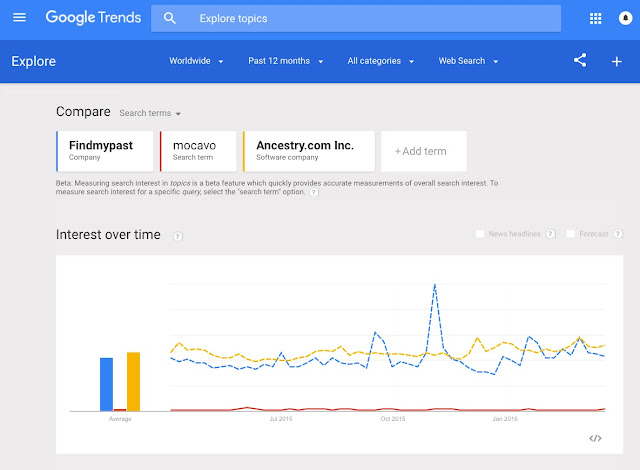 This type of change should forewarn genealogists of the need to backup all of their data. Keeping all your genealogical eggs in one genealogical program can be hazardous and even the larger companies may discontinue their databases at any time.

In the past, such acquisitions, such as Ancestry.com's acquisition of Footnote.com that became Fold3.com, have been used by the companies to create separate "profit centers" in the form of individually subscribed database websites. I hope the reference to a merger of the information as shown in the notice on the Mocavo.com website is accurate. I think the existence of a separate fee-based website is not nearly as useful to those of us in the genealogical research community as are the larger consolidated websites. Of course, another fee-based website may be more monetarily profitable to the larger companies.

I note that a now, old news story from 2015 indicated that Ancestry.com was up for sale by its owner, Permira Advisers LLC. It would seem to be a possibility that Findmypast.com (owned by D.C. Thomson and Co. Ltd) would be in a good position to acquire Ancestry.com. If that were to happen, the consolidated company would easily be the largest online genealogy company in the world. Although Ancestry.com claims that position now, I suggest that MyHeritage.com may be larger or in a good position to become the largest online genealogical database company in the near future. Then again, maybe Ancestry.com has become so profitable that Permira no longer wants to sell?
Posted by James Tanner at 11:07 AM