One of the most elusive topics for historical and genealogical research can be exactly, physically locating an event that occurred in the past. This is especially true of transient events that do not necessarily leave any physical remains. Depending on the local customs of time when your ancestor's lived, burials could have been made in very public or very private places. In the United States, it is not unusual for burial sites to be near churches but it is also common to find that families established their own private burial grounds.

We use the term burial grounds to differentiate these locations from formally established cemeteries. A cemetery implies that a group of possibly unrelated people are buried in a systematic way, usually involving someone or some organization acting as a manager of the organization and method of transferring ownership of the ground. The idea of purchasing a burial plot dates back into antiquity, in the Bible in Chapter 23 of Genesis we read about Abraham purchasing a burial plot for his wife Sarah. The practice of selling burial plots in cemeteries persists to this day. The topic of the availability of land for burials is a constant issue in American history. Here in Utah along what is called the Wasatch Front, accommodating the expansion of population and making room for cemeteries is a constant issue. See the following:

We sometimes get the impression that cemeteries are located in pastoral landscapes with grass and trees, but one of my own ancestors was initially buried in the Fourth Presbyterial Burial Ground in what is now downtown Philadelphia, Pennsylvania. But because of changes in the church property and later commercial development, the burial ground was removed and my ancestor's remains were re-buried in a much larger, developed cemetery in an adjoining town, See

The present location of the church is a row house development. A search in FindAGrave.com for Philadelphia County, Pennsylvania shows 365 cemeteries. The Fourth Presbyterian Burial Ground is listed as "defunct." My ancestor, William Linton, is now buried in the Westminster Cemetery in Bela Cynwyd, Montgomery County, Pennsylvania. Discovering this sequence of events required a trip to the Philadelphia City Archives in downtown Philadelphia.

You may need to find journals, letters or other personal records for a description of the death and burial of some people. For example, as people in America migrated from the East Coast to the interior and west, it was not too unusual that burials took place along the trail. In most cases, the trails are well marked today and you can located many of the camping spots. If you have access to a journal or diary, you may be able to locate the stopping place where a burial occurred. Some researchers have been successful in finding these unmarked grave locations, but in end, locating the grave or graves may require more information than it is possible to find.

I have previously mentioned one of my ancestral burial grounds located in Rhode Island. Fortunately, in the case of cemeteries and burial locations in Rhode Island, there is an abundance of written records locating almost all of the burial grounds in the state. When trying to locate a burial for my remote ancestor, William Tanner, I found references to his family burial plot in a list compiled by the Rhode Island Historical Cemetery Commission. Here is the description of the cemetery or burial ground:


This burial ground is the oldest of three Tanner lots, located a thousand feet south of Laurel Lane, behind the green for hole number three of the Laurel Lane Country Club. It is 40 feet x 45 feet, in good condition, with no enclosure or historical cemetery sign. There are eighteen graves in this burial ground marked with fieldstones, six of which are crudely inscribed. James N. Arnold recorded this lot Nov. 10, 1880, his #233, “a short distance northwest from the above [SK 131] another yard of the same family in field without protection, rude stones.” He recorded nine inscribed and 18 uninscribed fieldstones, nine large and nine small [children], in what we have now divided into two burial grounds, SK129 and SK 130. The genealogy, William Tanner, Sr. of South Kingstown, RI and his Descendants by Rev. George C. Tanner (1910) has a plan of these three burial grounds on page 14 with the following text: This burial place of the early Tanners is on the original farm owned by William Tanner Sr., and in an open field near the ‘Great River’ [Usquepaugh River, aka Queen’s River] and a short distance from a walled grave yard [SK131]. The most north westerly grave is that of William Tanner, evidently, and marked with a rude granite field stone, with the simple letters, W. T. At the right are two graves, marked, M. T. and at the right of this, a second marked E. T. At the foot of these are four small graves, probably children of William Tanner, as the custom was to bury young children at the foot of their parents’ graves.” Eastward of these short graves are three graves, the middle one marked J. T., the one at the right with the marking indistinct, but may be J. T., that at the left, plainly marked S. T. There are undoubtedly the graves of John Tanner, son of William , and his first and second wife, Jean and Susannah.” Found, registered, and recorded by John Sterling & James Wheaton for a 2004 book on South Kingstown cemeteries. About sixteen paces west of the northwest corner of the walled enclosure and about twenty-three paces to the north are the graves of Josias Tanner, and at the right one marked A. T., Amy Tanner, and at the left of that marked J. T. one marked P. T., Phebe Tanner, wives of Josias [SK130].

From this description, I was able to locate the cemetery. Here is a photo of what my wife and I found on a visit. 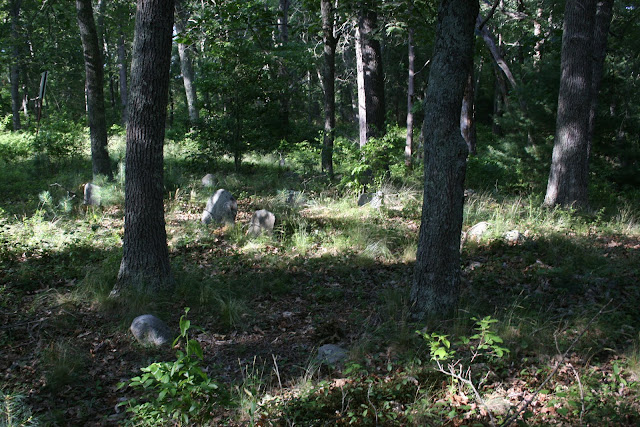 The rocks visible in the photo are grave markers where almost all of the inscriptions have been eroded over time and are unreadable.

In order to find these locations, you will need to combine your historical research with maps. As I already mentioned, an online search that includes newspapers and books may give you a general idea of the location of a cemetery or the exact location with directions. In the end, you may also have to spend some time walking around and searching for the location. If you do decide to go to the supposed location and physically search for a cemetery, it is always a good idea to begin your search by talking to the local residents. I usually start with the public library if one is available. Sometimes the librarians can be valuable resources for local history.

Be sure to dress appropriately for the area and weather. If the cemetery is in a remote location, make sure you follow the guidelines for off road travel. It also a good idea to understand any local customs or restrictions on accessing the burials.

One interesting source for possible information about abandoned cemeteries is a website that lists ghost towns. One good source for photos and locations around the United States is the GhostTowns.com website. This site has a clickable list of abandoned towns across the country. Many of these locations also have individual pages on Wikipedia. From the Wikipedia page, you can get the coordinates of the former town and use Google Map's satellite view to pick out a likely burial ground.

Here is an example of a place called Pithole, Pennsylvania. From the Wikipedia article, I got the coordinates: 41.523889, -79.581389. These are the decimal coordinates and can be used by the Google Maps program to show the satellite view. Here is a screenshot of that location: 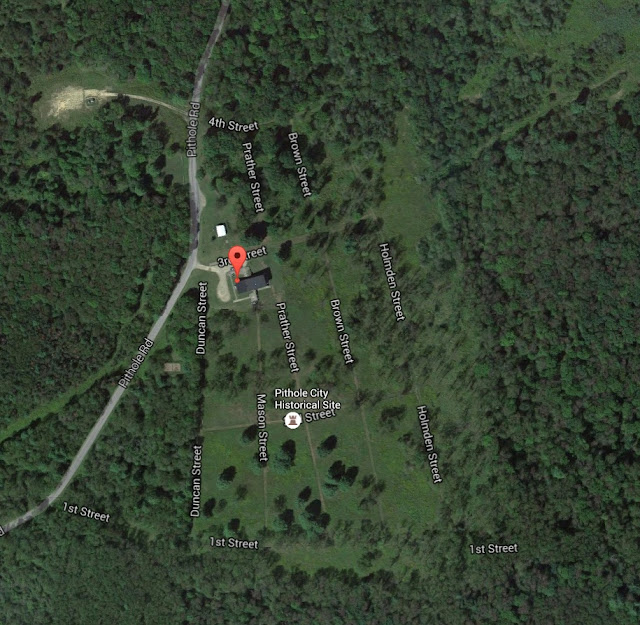 You can see that the street names are marked. There is a reference to the location of the Pithole cemetery on the FindAGrave.com website. Another way to find this same location is to use the United State Geological Survey, Board on Geographic Names website and search for cemeteries as a category. You can use this website to search for domestic as well as foreign locations. For example, if I search for the location of the Pithole City on the website, the search will give me the coordinates, but it will also give me the particular topographical map for that location. I can then go to topographic map to see if the cemetery is marked.

Here is an example of a town with a satellite view of the cemetery. 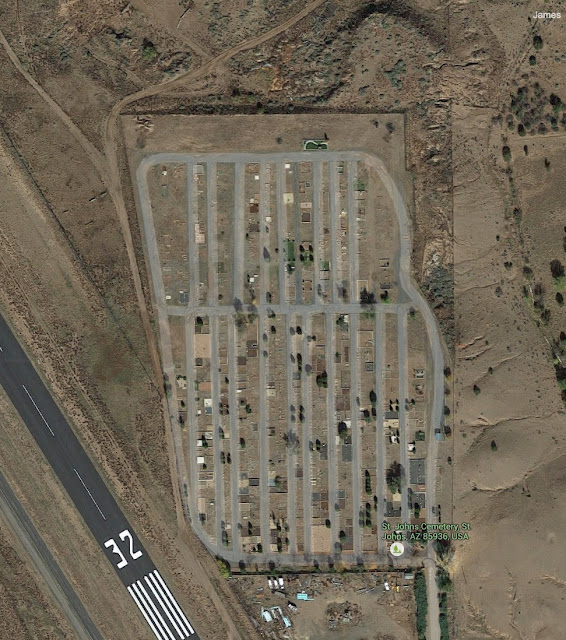 Here is the same cemetery on a topographic map of the same town. 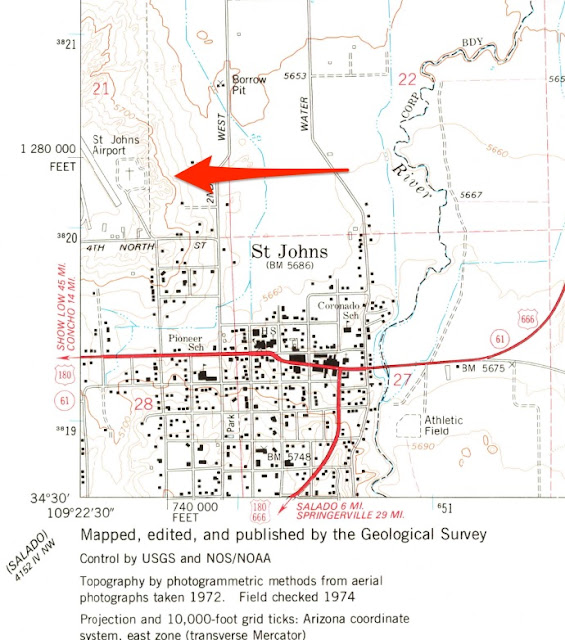 To summarize, first do your homework online. Check for historical document or surveys that may list the location of the burial ground. The burial ground could be mentioned in diaries, journals, histories and any other documents that the town or the area where your ancestor may have been buried. Using the name or names of the locations, look for the places on Google Maps, the USGS Board on Geographic Names and Wikipedia. If you find the place, you can use the geographic coordinates to find the location on topographical maps where the cemeteries might be shown. In addition, you can search of Google map view and satellite view to obtain even more information.