The Mysterious Origin of William Tanner of Rhode Island

When I asked why genealogists don't ask more why questions, what I meant was why they don't realistically think about what they put into a family tree. I likely have tens of thousands of Tanner relatives and many of them have access to and are in the FamilySearch.org Family Tree. By the way, if you really care to look, any registered user can go to this family line and look at what is in the Family Tree. Notwithstanding this abundance of potential research power, the family line, as shown in the Family Tree is entirely unsupported, conjectural and unrealistic. No effort has been made to connect a line of Tanner's in England to the William Tanner LH2G-FGG who appears in Rhode Island in 1680. When I have communicated with some who claim to have found a link from Rhode Island to England, the researcher has never provided me with any documentation.

The basic issue here is when a pedigree reaches an unestablished ancestral link, it ceases to be factual and becomes fantasy. This is commonly done by careless and ignorant researchers trying to connect their family to a famous person or royalty or both.

In the case of the Tanner line in Rhode Island, there are two major issues: establishing a connection between the historical William Tanner (b. abt 1662 probably in England) and his commonly listed son, Francis Tanner, (b. 1708 in Rhode Island, d. 1777 in Rhode Island). The life of this Francis Tanner is well documented. However, most of the documentation has yet to be entered into the Family Tree. Why? Because the Family Tree does not yet work adequately for this particular family. Down the line a bit, is my Third-Great-Grandfather, John Tanner who is an IOUS or Individual of Unusual Size. Here is a brief explanation of this issue.


When this particular issue is resolved, I will be one of the first to start back through this line that I have researched and add all the documentation. I may even resolve the issue of whether or not there is an extra William Tanner who is the father of Francis and the son of the immigrant William Tanner.

But I used this as an illustration of how nearly every family line in nearly every family tree online has similar problems. In have examined literally thousands of individual's family trees. In every single family tree I have examined the lines either end or dissolve into fantasy. This Tanner line is an excellent example of the fantasy alternative. As soon as the Family Tree is completely separated from new.FamilySearch.org, I will delete the relationship between the Rhode Island William Tanner and any unsupported parentage. Also, there are possible duplicates for William Tanner that cannot be merged at this time. I will also merge all of the duplicates that cannot be resolved at this time. I might also clean up the fact, that I didn't mention before that he is shown on the Family Tree with eight different wives. There is no real sense in working on this line until the issue of the IOUSs is resolved. Here are a few of the William Tanner ID numbers that are floating around on the Family Tree.


Each of these has several different wives attached. Here is one interesting example. 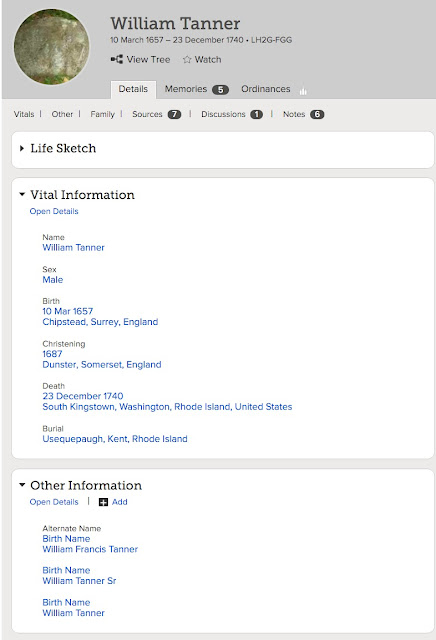 This William Tanner alternative is shown as born in Surrey. So the Family Tree has William Tanners from Surrey, Kent, Wiltshire and Rhode Island. This particular William Tanner iteration has seven wives. You might notice that William Tanner LH2G-FGG is born in Surrey and christened in Somerset. Chipstead, Surrey is about 175 miles west of Dunster, Sommerset. Excuse me if I don't believe that the birth and christening records refer to the same person. Oh, one other fact, if you do a general search for the name "Tanner" in the UK on Findmypast.com you will find that there are 283,667 Tanners listed. If you repeat the same search for the surname in approximately 1667, you get 10,260 individuals and 832 of them are named "William Tanner." Take your pick because apparently those who have entered all this stuff into the Family Tree have certainly taken their own pick.

I am still waiting for someone to show me one record or one document that connects the William Tanner in Rhode Island with any one at all in England. If you want to step off into the Fire Swamp, be my guest.
Posted by James Tanner at 7:48 AM