Let It Be: Obsession and Genealogy 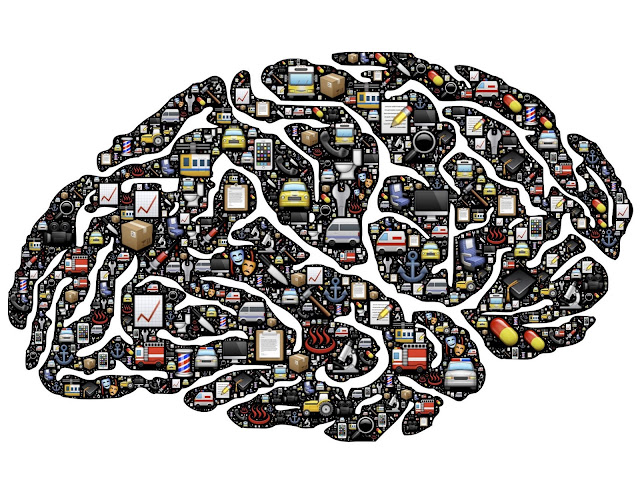 This image pretty much sums up my own brain except for the major part that is consumed with genealogy. Lately, however, I have been "helping" several genealogical researchers that seem to be obsessed with finding a particular ancestor or event in an ancestor's life. In one case, the patron at the Brigham Young University Library was consumed with discovering the location of an immigrant ancestor. Another patron was focused on the death date of an ancestor that died in the late 1800s to early 1900s somewhere in the United States. It seems like I have a steady stream of people who abandon all other avenues of research to focus on one date or one person. I am beginning to think that we might need some genealogical counseling services.

Quoting from the following article on Nature.com:

An individual with obsessive–compulsive disorder experiences exaggerated concerns about danger, hygiene or harm that result in persistent conscious attention to the perceived threat or threats; in other words, they result in obsessions. In response to the distress and/or anxiety associated with these obsessions, the person acts (that is, performs a behaviour) to neutralize the distress and/or anxiety, which provides temporary relief from the anxiety associated with the obsession. However, this relief leads to reinforcement of the behaviours, leading to repetitive, compulsive behaviour when obsessions recur.

From my limited contact with the researchers, I can't possibly determine if their obsession with a specific research issue spills over into other obsessive behavior patterns, but I suspect that it might.

Let me approach the case of the person who is obsessed with finding a death date for an ancestor with some hypothetical solutions to the problem. First of all, and most importantly, not every event in every person's life has been recorded. Records are pervasive and there are many more than can possibly be imagined by the average researcher, but genealogical research does have its limits. Given the time period of the late 1800s or early 1900s, death records may or may not exist. Depending on the part of the United States where the person might have died, which pretty much covers the entire country, consistent recording of death dates and death records in general may not have been done as late as the 1920s in some areas of the country. So, the simple answer to this particular researcher's unending quest is that there is no record of the death of this particular person and continued searching will not reveal further information.

It is entirely possible, given the time period involved, that the elusive ancestor died somewhere unexpected. For example, transportation was readily available in the late 19th and early 20th Centuries in the U.S. and the ancestor could have gotten on a train, for some reason, and died in an unexpected place across the country. Perhaps, feeling ill, the person got off a train somewhere in the Midwest and died suddenly without anyone around who knew who the person was. Of course, I can continue to imagine all sorts of possibilities that would explain the missing death date and place.

But why does the researcher, who probably has better things to worry about, spend so much time looking for that one date? Is there any doubt that the person, who was born in the early 1800s is still alive? Not really, but this simple fact seems to be lost on the obsessive researcher.

What about the immigrant? This is a little more complex situation. Locating the place of origin of an immigrant is crucial in extending that particular family line. In the most recent cases I had to deal with, the researchers' ancestors came from Ireland, Germany and England and in none of these cases was there any more specific information than those general places. By the way, all of the elusive immigrant ancestors had extremely common names. The particular obsession of these recent patrons consisted of an inability to understand that research had to begin with searching for information here in the United States, rather than jumping immediately to records in Europe. After hours of trying to explain the need to do further research on the individual after arrival in this country, I had to give up trying.

It seems easy to say things like, try looking at a broader spectrum of records rather than returning to the same collection of U.S. Census records, but in one case the researcher had photocopies of the U.S. Census records and every time I tried to explain why we could not do research in Germany, the patron pulled out the records to show me where the Census said that the ancestor was born in Germany. The tragedy of this particular issue was that the ancestor was born in the early 1800s and there was no information about which of the German states or countries was actually the place of origin.

In this particular type of situation, I guess I just have to feel sorry for the researchers and hope that they move on to more productive pursuits. Genealogy can be a challenge but it is important to maintain a balance between obsession and reality. Ancestral lines do end at some point. It is also true, as I have personally found, that some ancestral mysteries can take decades to resolve. But it is dangerous to abandon all other genealogical research to focus on an issue that does not seem to ever be resolved.

In the case of searching for the immigrant, the patron clearly needed a lot more knowledge and experience to make any headway. In the case of the missing death place and date, the researcher just needs to accept the fact that the date and place are missing and get on with other research.
Posted by James Tanner at 7:52 AM