Reduced to its essentials, genealogy is primarily an information processing activity. We gather information, organize it and then present it in some format. Over the years, genealogists have created their own set of forms to assist in the process of categorizing the discovered information and standardizing the format of the output. When personal computers began to have an impact on genealogical research, the preexisting forms were adapted to computers. Subsequently, what you see when you look at a pedigree chart on paper and what you see on a computer are very similar. Here is an example of a family tree from the 18th Century:

Here is an example of a family tree from one of the major, online genealogy programs, in this case FamilySearch.org. 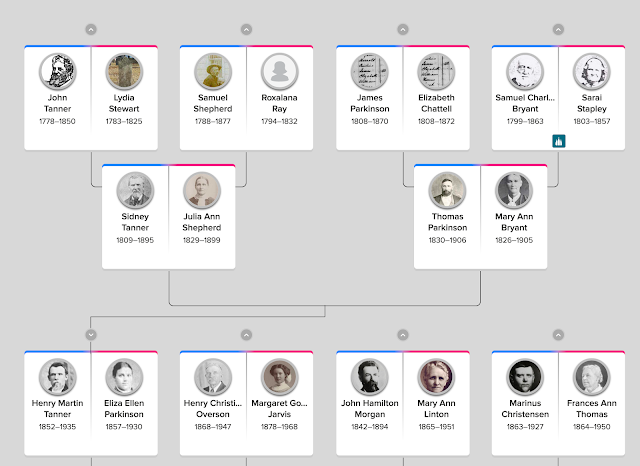 Of course, the computerized version of the pedigree can be viewed instantly in a variety of views and by simply clicking, the information about each entry can be expanded. But the format is very similar. So how do we take genealogy beyond simply reproducing paper charts?

The answer to this question is not simple. It involves the integration of a number of digital tools that have only very recently become widely available. The solution also involves breaking away from the apparent need to reproduce the format of the paper documents and allowing the genealogical researchers to utilize the power of the online network rather than confining them to traditional, limited formats. One interesting example of this structured but limited attitude towards information was the early reproduction of traditional board games for computers. Early game developers thought that if they made the popular board games available on computers, they would sell more games. Well, paper-based board games such as Monopoly, have not disappeared, but online, interactive computer games no longer copy board games.

The point here is that over time, the users of board games realized that paper-based games were essentially different than computer games. People still play Solitaire on a computer, but you would not recognize the more popular online games as having any kind of a paper-based history.

So where do genealogists go with moving to an online method of storage and organization? There are seemingly endless choices. Some genealogists have been advocating the use of an online website and data storage program called Evernote.com. Here are several books on the use of Evernote for genealogists.

Adding Evernote to Your Genealogy Toolbox, 2014.


Evernote for Genealogists How to Plan, Gather, Store, and Organize Your Research, 2015.


Scott, Kerry. How to Use Evernote for Genealogy: A Step-by-Step Guide to Organize Your Research and Boost Your Genealogy Productivity, 2015.

The concept is basically that many of the document creation, storage and manipulation tasks of genealogists can be centralized in this one program. Of course, there are many online family tree programs that give genealogists the ability to move their information from one device to another by storing all the data online. Each of the big four online, genealogical database programs, Ancestry.com, FamilySearch.org, MyHeritage.com and Findmypast.com, have online family tree sections. Of course, there are a large number of other programs that also provide online family tree features.

For years, the idea of a paperless office has been touted as the solution to massive use of paper. For genealogists, we are close to this idea becoming a reality. One of the missing segments of this paperless goal was a practical way to create and share documents. Email is useful, but is again essentially a computerized form of paper. The developing concept now is shared documents. For example, I can use a program such as Google Docs as an online, free word processing program. The one additional factor that moves the documents created with Google Docs beyond paper is the ability to share documents and allow multiple participants to work on the document at the same time. Additionally, the documents are instantly available on any Internet connected device.

Rather than lugging a briefcase full of documents and notebooks to a library, all I have to do is have either my own device, a computer, laptop or tablet, or access to a computer in the library. With addition of a smartphone, I am now able to go to the library, take digital notes and digital photos of any documents I find (within the copy parameters allowed by the library or archive) and move that instantly to any of my other connected devices. I can also feed the information and images directly into my online family tree program if I want to do so.