Two to the Tenth Power and Genealogy: Thoughts on Reality

If we were to use the formula above to take 2 to the 10th power, the results would be 2*2=4*2=8*2=16*2=32*2=64*2=128*2=256*2=512*2=1024. Since the number of your biological parents double in each succeeding ancestral generation, if you claim to have your genealogy complete back ten generations you are dealing with a possible 1024 Tenth Great-grandparents. I say "possible" because of pedigree collapse. This is where two of your ancestors who married were related. For example, my parents may have been second cousins. Also my Great-grandfather had two wives who were cousins, so his children in each marriage were half-siblings and also cousins.

Now let's suppose we want to talk about reality. It might be interesting. Of course, if we go back one more generation, to the 11th generation, the number doubles to 2048. This whole process assumes were are only considering strictly biological parents and grandparents. From a genealogical standpoint, we should also add in step-parents, adopted parents, guardians and other legal and social relationships that are the equivalent of parents in a larger sense.

When I did my original family survey about 30+ years ago, I found that some of the direct ancestral lines supposedly went back 19 generations. At that level, I had a potential 524,288 direct line ancestors. At that time, if I had a family group record for each of those ancestors, the stack of paper would have been over 40 feet high.

How about the real reality? How many people can really prove (source) every one of their family lines back ten generations? I have had family members researching all of my family lines for over 100 years. I am certainly not an average case. I am more likely a very exceptional case. Now, presently, we have a way to see what the sum total of all of those years of genealogical research has produced. For me, that method is the FamilySearch.org Family Tree. I can literally go back on every one of my lines and see if anyone can document with sources back even ten generations. In counting generations, the question is whether you or your parents are the "first" generation. The formula above and the most common way of numbering generations says that you are generation number one and your parents are generation number two and so forth.

Here is what is presently in the Family Tree for the Tanner family in generation number ten. 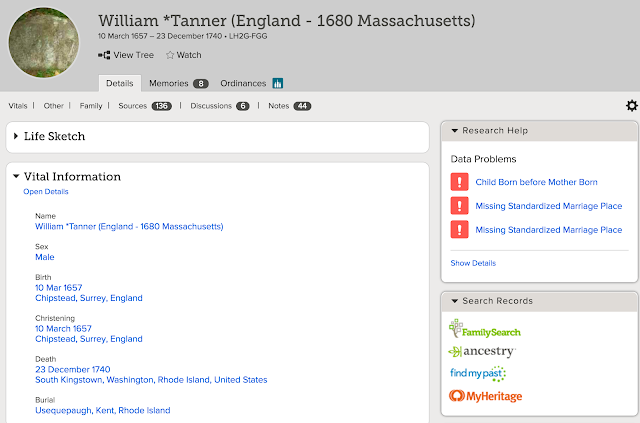 There are seven wives with obvious duplicates and 29 children listed. There are also 136 sources attached to the entry with only one saying he was born in Surrey, England, and, by the way, there are no additional sources connecting this Surrey, England William Tanner to the one in Rhode Island. Of course, this doesn't "prove" anything. Just because I have one line that peters out at the 10th generation is what? Nothing. But interestingly, as I work back on each of my family lines over the years, I am finding that documentation stretching back to the 10th generation is extremely rare. Most of my family lines are only documented to six generations.

By the way, if I started with the assumption that I really had over a half a million 19th generation ancestors and I picked some arbitrary number of children, say five, for each of those couples, I could quite literally be related to millions upon millions of people. Let me give one documented example. I am a descendant of three of the Mayflower passengers who arrived in America in 1620. Some estimates run as high as 35 million descendants of the 29 adult Mayflower passengers currently known to have descendants. See Wikipedia:The Mayflower Society.

Let's assume some more reality. How many ancestors do I end up with going back just 10 generations? Remember, 1024 is the total in the tenth generation. So the real total adds all of the generational numbers together or 1+2+4+8+16+32+64+128+256+512+1024 or 2047 cumulative ancestors. If I just go back one more generation, I find the number jumps to 4095. One more generation brings me back to the Mayflower and a potential of 8191 direct line ancestors.

Of course my addition may be off since addition is not my best subject, but the number of potential relatives I have can easily be in the millions upon millions.

One of the conclusions that can be drawn from this type of reasoning is that no one can possibly say that their genealogical investigations are complete. Every time to you manage to go back one generation the potential number of ancestors and descendants at least doubles. From my own standpoint, estimates of the number of descendants of some of my Great-grandparents number in hundreds of thousands since they had multiple wives and as many as 23 children.

Granted there are a lot of people whose apparent potential ancestral lines seem limited or even non-existent. But what if they get a DNA test and start comparing the results on one of the online family tree programs? Isn't there the potential of identifying some relatives? Yes, once again it is a numbers game. DNA testing for genealogy is in its infancy. As more people publish their results, there is a greater and greater possibility of discovery and progress in identifying relatives.

But here is the real issue. As I research back in my ancestral lines, there is a mathematical certainty that other people are researching the same ancestors. How do I know that? What I mean is how can I find out who is researching the lines and keep from doing the same research over and over again? The answer today is online in the form of unified family trees. From my perspective, the best possibility is the FamilySearch.org Family Tree. Granted, it lacks documentation in many instances and there are controversies like the one I pointed out with William Tanner, but it does give the best solution presently available for sorting out these millions of possibilities. Right now, it lacks DNA evidence, but that evidence can certainly be used from one of the other online family tree programs to supplement the relationships discovered in the Family Tree.

The other conclusion is that no one can claim to have completed their genealogy. No one.
Posted by James Tanner at 7:06 AM