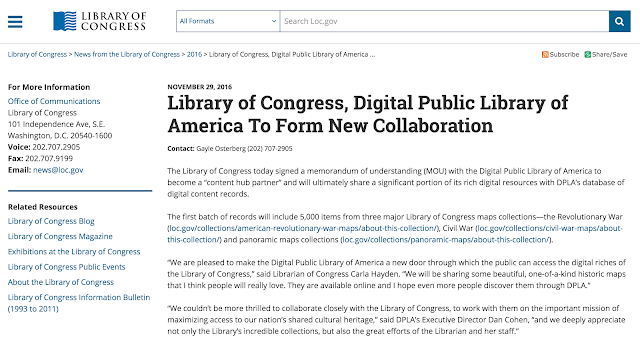 In an announcement dated 29 November 2016, the Library of Congress has signed a Memorandum of Understanding (MOU) with the Digital Public Library of America (DP.LA) to become a “content hub partner” and will ultimately share a significant portion of its rich digital resources with DPLA’s database of digital content records. Quoting from the announcement:

As the announcement further indicates,


Library of Congress items already appear in the DPLA database. Earlier in this decade, the Library digitized more than 100,000 books in its collections as part of its membership in the Hathi Trust and the Biodiversity Heritage Library, both current partners with the DPLA. As a result, those books are already in the DPLA’s collections through those partners.


The Digital Public Library of America, the product of a widely shared vision of a national digital library dating back to the 1990s, was launched with a planning process bringing together 40 leaders from libraries, foundations, academia and technology projects in October, 2010 followed by an intense community planning effort that culminated in 2013. Its aim was to supersede the silo effect many digitization efforts were subject to. Based in Boston, the board of directors includes leading public and research librarians, technologists, intellectual property scholars, and business experts from across the nation. Its goal is to create “an open, distributed network of comprehensive online resources that would draw on the nation’s living heritage from libraries, universities, archives, and museums in order to educate, inform, and empower everyone in current and future ­generations.”