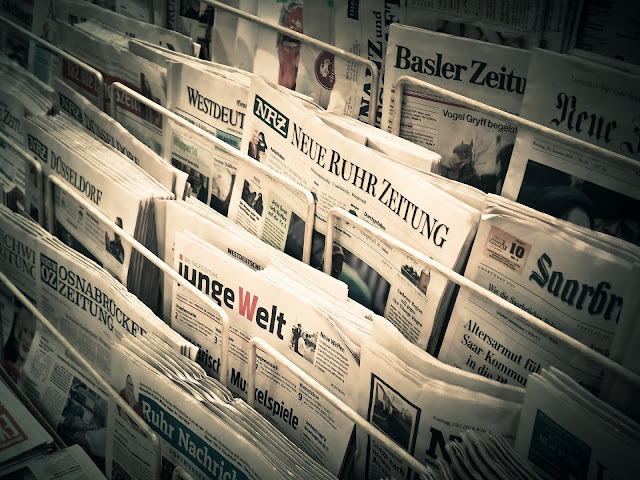 One common misconception rampant among genealogists is that paper records are somehow more permanent than digital ones. The reality is much more complex than this simple belief. Both paper and digital records require migration to survive. Record migration is the process of moving the information contained in the records from one media to another. Paper migration takes place when the information on the paper record is copied or transferred to a new media, such as microfilm. Digital migration takes into account changing technology and moves the information from one media, such as floppy disks, to another more advanced technology such as a hard drive. The preservation of the information also depends on the number of copies made of the original and the existence of a formal preservation organization such as a library or archive.

My first example is newsprint or the acidic based paper products that began to be produced in the late 1800s. When I was living in Mesa, Arizona, we regularly had local newspapers dropped on our driveway. If those throwaway newspapers were not retrieved the same day, the paper would turn yellow and show immediate signs of weathering from the intense desert sunlight and heat. If preservation efforts are immediately implemented, newsprint can theoretically last for a hundred years or so. For a technical discussion of this issue see, "The Deterioration of Newsprint and Implications for Its Preservation" by Charles S. Tumosa, David Erhardt, Kathy Hufford, and Evan Quasney. But in actual practice locating a copy of a particular newspaper printed on a particular day, to find an obituary for example, depends more on the the physical availability and retention of the copy than it does on deterioration of the paper. Newspapers can take up a significant amount of storage area.

One relatively famous example of the loss of paper documents is the 1890 U.S. Federal Census records; a constant thorn in the side of genealogical research in the United States. The commonly held belief is that the 1890 Census was lost to a fire. The truth is that most of the Census was rescued from the fire only to be lost by bureaucratic incompetence. All genealogists should be aware of the real story of the 1890 Census. Here is a reference to the complete story as published by the U.S. National Archives.

The 1890 U.S. Census Population Schedules were lost simply because there was only one copy and that copy was destroyed. My own personal experience of this involves a paperback book. One of the earliest science fiction books I read was the following:

My copy of the book was likely one of the original paperbacks. I still had the book carried about from place to place for many years, eventually, the book literally disintegrated even though it was kept on a shelf and not particularly misused. The quality of the book itself was so poor that the paper and backing fell apart. If you wanted to read a copy of this book today, you could find it in over 77 editions in over a thousand libraries there are even four ebook editions. On Amazon.com, I could buy a used copy of the book for about $5.

Another example, if one is needed, is the "burned county" issue of document preservation commonly bemoaned by genealogical researchers. The loss of valuable genealogical documents in county courthouse fires is a well-known and well documented issue. See "Burned Counties Research" in the FamilySearch.org Research Wiki. Interestingly, this article alludes to the use of paper research methods to overcome the loss of paper records.

The point here is simple. As genealogists we somehow believe that paper implies permanence. When there are significant challenges to preserving paper records especially when there is only one copy of the record originally created. Unfortunately, many genealogically significant records exist as only one original, such as letters, diaries, and many other similar items. These unique originals can be lost by the possessor simply throwing the original in the trash. The fact that the paper of the original copy could have lasted a hundred years or more is irrelevant to the greater issue of preservation.

When a genealogical researcher fails to make arrangements for the preservation of his or her work, then the mistaken view that paper is superior to digital copies of the information contained on the paper is fatal to its preservation.

Don't worry, this series will go on for a while.

See the first part of this series here: