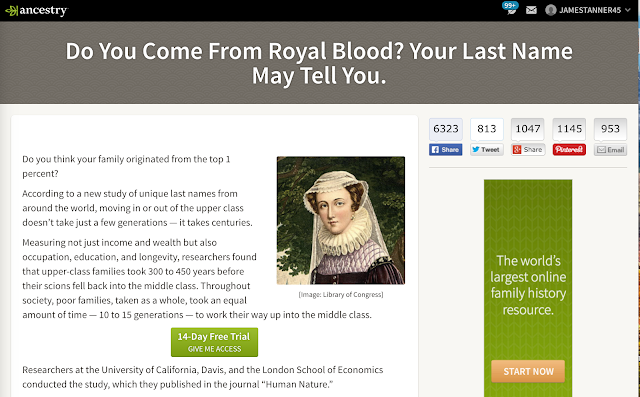 I understand the concept of "puffing" in advertising, but a recent posting on Facebook led me to this advertisement from Ancestry.com. Just in case, here is the definition of puffing:


An opinion or judgment that is not made as a representation of fact. Puffing is generally an expression or exaggeration made by a salesperson or found in an advertisement that concerns the quality of goods offered for sale. It presents opinions rather than facts and is usually not considered a legally binding promise. See http://legal-dictionary.thefreedictionary.com/Puffing

This caught my eye for a number of reasons, including the fact that I had just finished researching a news article on Scotland DNA. I certainly acknowledge the fact that royalty had children and that some of us do have royal ancestry, but really, what does your surname tell you about your ancestry? What it does tell, most of the time still, in the United States is the surname of your father. But even that is merely a matter of chance.

My own surname, "Tanner" obviously originated with an occupation. But interestingly, although many people with the Tanner surname originated in England (it appears to be an English name) there is a huge population of Tanners in the United States who originally immigrated from Switzerland and probably spoke German/Swiss.

But here we go again. The Ancestry ad references the following:


Researchers at the University of California, Davis, and the London School of Economics conducted the study, which they published in the journal “Human Nature.”

In this case, it was relatively easy to find references to the original article. First was an article on the Phys.org website entitled, "Family ties that bind: Having the right surname sets you up for life." Quoting from that website:


If your surname reveals that you descended from the "in" crowd in the England of 1066—the Norman Conquerors—then even now you are more likely than the average Brit to be upper class. To a surprising degree, the social status of your ancestors many generations in the past still exerts an influence on your life chances, say Gregory Clark of the University of California, Davis, in the US and Neil Cummins of the London School of Economics in the UK. They used the Oxbridge attendance of people with rare English surnames (last names) to track social mobility from 1170 to 2012. In an article in Springer's journal Human Nature, they show that social mobility in England has always been slow and today is not much greater than it was in pre-industrial times.
Read more at: http://phys.org/news/2014-11-family-ties-surname-life.html#jCp

The article indicates that if your ancestors were rich and royalty, then it is very likely you are today. Hmm. What does that really say about the rest of us? Well, I did track this particular claim back to the original article. The article is "Surnames and Social Mobility in England, 1170 - 2012." The article was published back in 2014 and appeared online on 15 November 2014. The Abstract of the article is as follows:


Using educational status in England from 1170 to 2012, we show that the rate of social mobility in any society can be estimated from knowledge of just two facts: the distribution over time of surnames in the society and the distribution of surnames among an elite or underclass. Such surname measures reveal that the typical estimate of parent–child correlations in socioeconomic measures in the range of 0.2–0.6 are misleading about rates of overall social mobility. Measuring education status through Oxbridge attendance suggests a generalized intergenerational correlation in status in the range of 0.70–0.90. Social status is more strongly inherited even than height. This correlation is unchanged over centuries. Social mobility in England in 2012 was little greater than in preindustrial times. Thus there are indications of an underlying social physics surprisingly immune to government intervention.

So unless you are already aware of your royal ancestry because of your social status, it is unlikely that you were closely enough related to royal lines to gain any current benefit. Here is the citation to the original article.

I guess after doing this additional research, I think that the Ancestry.com ad is a little bit misleading. What is the answer to the question in the title? Well, it depends. Apparently, if you have one of the small number of very unique surnames, a fact you already know, you are likely to be rich and/or royalty, which you probably already know also.
Posted by James Tanner at 8:24 AM