The People of Scotland have Extraordinary DNA? 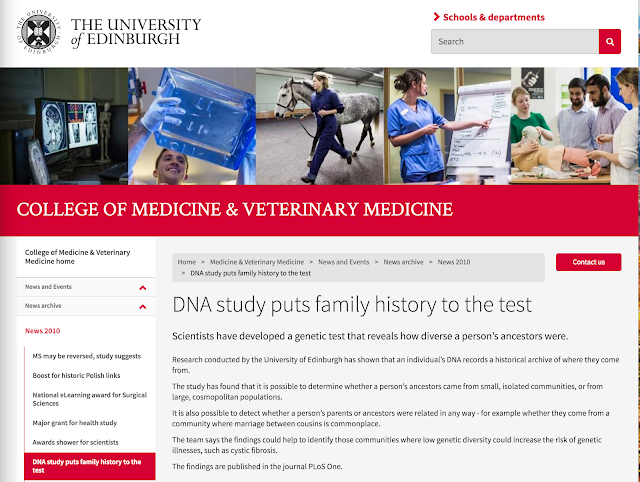 A BBC news article dated April 17, 2012 entitled "Study reveals 'extraordinary' DNA of people in Scotland" talks about a study done by a professor at the Edinburgh University that showed that people in Scotland have very diverse DNA origins.

Whenever, I see a news article like this, I like to try to verify the original information from the people who are quoted in the article. So I searched further and in going to the website for the University of Edinburgh's College of Medicine and Veterinary Medicine, I found the original article published on June 19, 2015 entitled "DNA study puts family history to the test." The University's article does not mention anything about diversity in Scotland so I decided to dig further. The Professor quoted in the article is Dr. Jim Wilson of the The University of Edinburgh, Centre for Population Health Sciences, Population and Disease Genetics Group. According to this webpage, Dr. Wilson founded the genetic ancestry testing companies, ScotlandsDNA, BritainsDNA and IrelandsDNA.

This still didn't get me to the findings talked about in the BBC article, so I searched further. I found an old BBC video, now discontinued, from 2011 and a Vimeo video entitled, "Is It Better To Be Mixed Race?" uploaded 5 years ago. It began to look like the BBC news article was not so much news. Now I was more interested to see if the original study actually existed.

My search led me to another article published in TheScientist on April 18, 2012 entitled, "Scottish DNA Unexpectedly Diverse." Quoting from that article,


Scotland contains an unexpected amount of human genetic diversity, according to a new study of the country's inhabitants. The project, called "Scotland's DNA," found 150 different genetic lines of female ancestry from Europe, Asia, and Africa and 100 different groups of male ancestry from Europe and beyond. For example, more than one percent of Scottish men are direct descendants of the Saharan Berber and Tuareg tribes, which belong to a lineage that researchers have determined to be about 5,600 years old.

Both this article and the one from the BBC were published one day apart in 2012 and it looks like TheScientist article is based on the BBC news article.

Both articles eventually end up at the website for ScotlandsDNA.com. OK, so the details of this "original study" are not so available as might be expected. In fact, the list of Dr. Wilson's publications doesn't seem to have anything directly related to the claimed findings. See Publications. Further, the "test" referred to in the articles did not concentrate on Scotland at all, quoting from the University's webpage article, "DNA study puts family history to the test,"

Scientists analysed the DNA of more than 1000 people across 51 ethnic groups, including Amazonian tribes in South America, Europeans and Pacific Islanders.

Hmm. I suggest that before you cite a news article as a reference, you spend a little more time doing your own research. There may well be a greater degree of genetic diversity in Scotland than some other places, but the "study" showing that diversity does not really exist and all the articles ultimately lead back to the commercial DNA testing company started by the professor.
Posted by James Tanner at 7:07 AM