Note: Please read the comments to this post to get an idea of the extent of the problem outlined. This series is a summary of the research into the origins of the Tanner family of Rhode Island. It is the culmination of many years of research and in past posts, I have discussed the progress of the research several times in past posts and some of the information is cumulative. 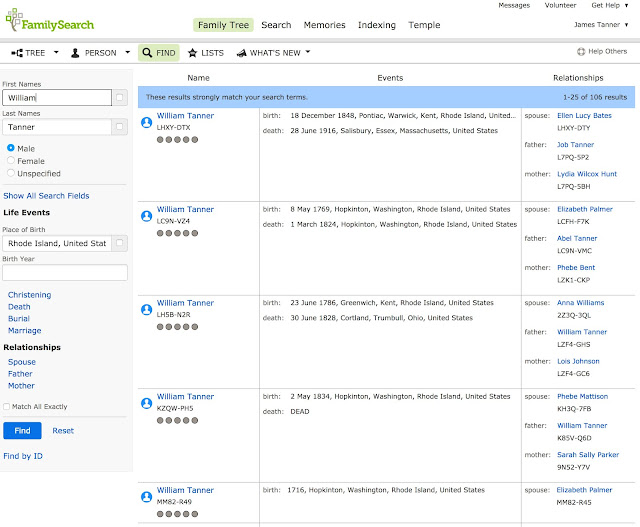 There are 106 "William Tanners" listed in the FamilySearch.org Family Tree that were born in Rhode Island. One of them, as shown by this screenshot, was born in 1608. 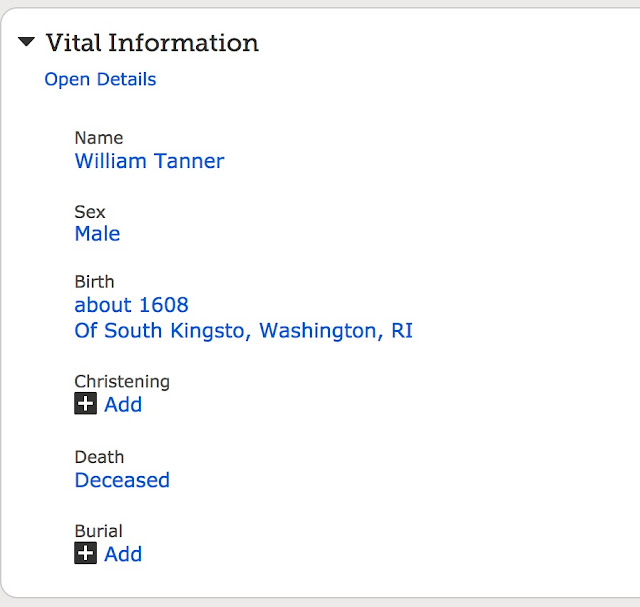 Here is another screenshot of the same person with the rest of this entry: 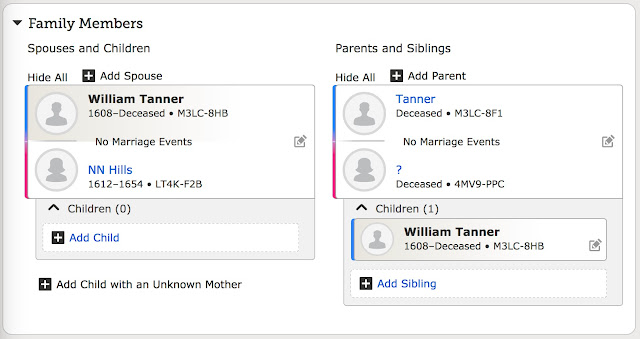 What is the basic problem with this entry? Well, the data doesn't make any sense, but the real problem is the historical context. The history of Rhode Island is well known and readily available. The list of the earliest European settlers is also readily available. The most famous person on that list is Roger Williams. The earliest settlement date is the spring of 1636. On the 20th of April, 1636, 25 people crossed the river from Seekonk, in the Plymouth Colony, to a location on the Moshassuck River in Narragansett territory which Williams named Providence Plantation. See Wikipedia: List of early settlers of Rhode Island. Of course, the entry above says that William Tanner was "of South Kingsto (?), RI" but does that make sense? South Kingstown, Rhode Island was formed in 1722. See Wikipedia: South Kingstown, Rhode Island. This William Tanner who have had to be over 114 years old to have lived in South Kingstown. How do these kinds of errors originate?

Here is another example from the list of 106 William Tanners. 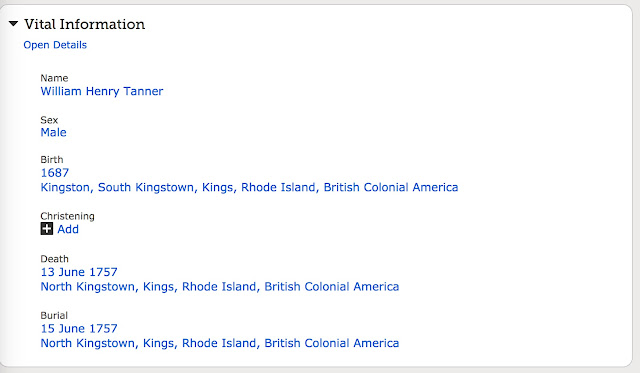 Once again, this William Tanner was born 35 years before South Kingstown, Rhode Island was established. Interestingly, after years of research, I have yet to find a record showing a middle name for the William Tanners that lived in Rhode Island in the 1600s and 1700s.

The most persistent and prevalent error passed down in the Tanner family is the assumption that there was only one William Tanner in Rhode Island during the late 1600s and early 1700s. Obviously, there were not 106, but some of those on the list fall outside of the time period. The actual number of people with that name is still subject to research, but it is more than three and probably more than five. If I limit the search in FamilySearch.org to the number of William Tanners who were born around 1680, then I get seven results. But there are now 2493 additional possible entries with names similar to William Tanner.

Approaching the problem from the assumption that the records containing a reference to a William Tanner all refer to the same person or ignoring the historical realities has created this massive log-jam of names in the Family Tree. It is also important to mention that almost none of that list of William Tanners has even one source attached. It is evident, that a massive cleanup effort will have to be undertaken in order to establish some baseline for identifying the correct ancestral lines.

I really have no idea at this point as to what to do with these extra, unsupported and wrong entries in the Family Tree. My ultimate goal is to whittle them down until I identify Francis Tanner's parents, the last Tanner in my line that is adequately supported by documentary evidence.

I will have to think about a solution for a while.

To read the previous post in this series, see the following:

http://genealogysstar.blogspot.com/2017/08/an-extreme-example-of-same-name-same.html
Posted by James Tanner at 9:07 AM