What about using standard place names for genealogy? 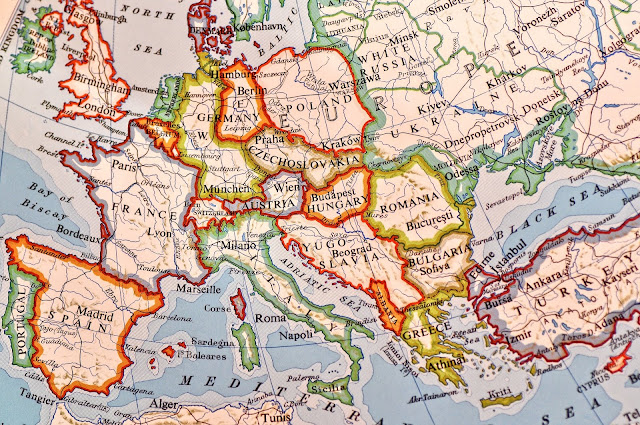 I recently got the following comment from a reader.


Have you done a blog on how to record places? I know to use the original name of the place where the event took place but have lots of question.

How do I record places in the us before it became the U.S? British Colonies or how? What date do I use for the establishing of the U.S. How about during the Civil War do you use Confederate States?

This topic comes up regularly as I am helping people learn how to do genealogical research. Also, it has been some time since I addressed this topic and so I decided it would be a good time to see if there is anything new concerning place names in the greater genealogical community.  There is still a certain amount of controversy over the use of place names at the time of this blog post. Various online programs use different "standard" names for the same places. For example, FamilySearch.org automatically suggests the designation "United States" for the United States of America. On the other hand, Ancestry.com automatically corrects the designation to "USA." Both are reasonably correct but they also illustrate the fact that there is no central clearinghouse in the greater genealogy community that could resolve these types of differences. It seems that this controversial topic hovers in the background but never gets completely resolved.

The existence of a controversy raises a more serious issue: is there a need for standard place names at all? My last comments on this issue were made in a blog post entitled, "Back to the Issue of Genealogical Standardization of Place Names." Here is a quote from that blog post that illustrates both the problem and the reason for standardization in the first place.


So why standardization? Because the identity of these political variations in the way that specific geographic locations were named generally identifies the place to start looking for records. For example, an individual farm has a specific geographic (GPS) location on the face of the earth. But over time, that same farm could have been in a number of different political entities. County boundaries could have changed and state boundaries could've changed. Those changes affect the places where records could have been created and presently could be found. So what do we do with this:
In this case, obviously, if a location was in either Wales or England, the name used to designate the political entity is fairly irrelevant. But if a person lived in Scotland or Ireland or Northern Ireland to name changes reflect jurisdictional changes where the records may have been kept. Unfortunately, the changes in the names as illustrated above also come with a log of political baggage. People can become offended if the wrong political designation is used.

The idea that identifying the physical location of genealogically and historically significant records is somehow tied to the way the records are named is a crucial concept in the process of doing research. There are several main issues going on here at the same time when we start to search for a specific genealogically or historically important record if we want to avoid the need to make broad blanket searches through a huge number of unindexed and uncataloged records. We need to know both the time and the place where the record was created and we need to know the jurisdiction where the record might have been preserved. Here is another quote from my previous post that illustrates this point.


There are a significant number of people who assume that if a person were born in Arizona then Arizona should be used as the designation even if the person was born in 1890 when Arizona did not exist as a state. They think that the distinction between Arizona and Arizona Territory is trivial and inconsequential. But here's the question. Where are the early Arizona records currently available? That may seem like a simple question but the answer is more complicated than you might think. Here is another list of dates:
There are several factors. First, there is the issue of the exact geographic location. Second, there is the issue of the time period under consideration. Third, there is the issue of the governmental agency administering the geographic area during the time period involved. Fourth, there is a historical question of where any records kept during the time of the event may have been created and where they are presently located. Fifth there is the identity of the person involved in the research.

Of course, simply knowing that the jurisdiction of a place changed over time does not necessarily help you find the records but it does give you a place to start.

Both library and archive catalogs and computerized indexes give you an illusion of being able to locate records more efficiently but as you learn about both systems you soon discover that the results they provide are illusory and sporadic. OK, so going back to the questions asked at the beginning of this post, let's see if there are any answers.

Restated, the first question asks how do I record pre-1776 designations for records that were created in areas currently designated as part of the United States of America? The real question is if there were records created before 1776 in America, where would they be located presently if they exist? The answer to this question depends on the particular location and time period. For example, my ancestors arrived in what is now Utah when this part of the country was part of Mexico. Are there any Mexican records of my ancestors? The answer to that specific question is no but another similar question might have a different answer. I can illustrate the issue with another question: where would I find records of my ancestors who lived in the Massachusetts Bay Colony in 1650? Would the records be in Massachusetts or England? This is a real question. Do you happen to know where the records kept by the Massachusetts Bay Colony which was in existence between 1628 - 1686 are presently located? Would you find the records if you looked only in the Commonwealth of Massachusetts, which, by the way, is the correct and present name of the state? If you want to know about the Massachusetts Bay Colony Genealogy see the following in the FamilySearch.org Research Wiki: https://www.familysearch.org/wiki/en/Massachusetts_Bay_Colony_Genealogy

The current designation for the British Colonies in America from FamilySearch.org is "British Colonial America." Very few people really like this designation because of the simple fact that no such designation existed during the colonial era. Have you got a better term? I don't.

What about the date for establishing the United States? By convention, I commonly use 1776. But practically speaking, you could choose 1788, the year the U.S. Constitution was finally ratified. Between 1776 and 1788 you may have to search for records in several different places.

Where are the Confederate records? Scattered all over, I am afraid. Yes, you need to designate the place as the Confederacy during the period of 1861 to 1865 because they are separately cataloged, indexed, and preserved. You also need to be aware as to when each of the Confederate States entered and left the Confederacy. Most of the records are in the U.S. War Department Collection of Confederate Records in the National Archives. See https://www.archives.gov/research/guide-fed-records/groups/109.html.

How you designate the location of an event in a person's life really does matter and yes, the general rule is that the places should be named as they existed at the time of the event. But as you can see from this short post, there are a number of nuances that can affect the best designation.