How to take better photos for genealogy: Part Five: Cameras 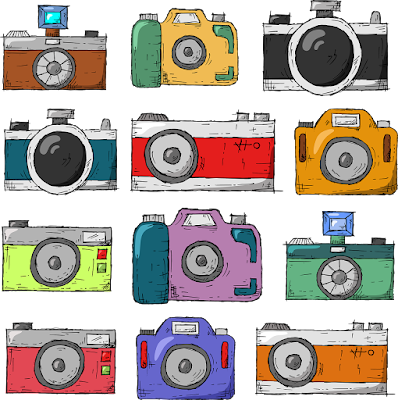 There have been some major shifts in photographic technology during the past few years. Of course, the major transition was from film-based cameras to digital cameras. The first digital camera was invented by Steven Sasson in 1975 while he was working at Eastman Kodak. Unfortunately, the first digital image was not saved. See "The Worlds First Digital Camera, Introduced by the Man Who Invented It." The first digital camera weighed about 8 pounds and created a .01 MP (Megapixel) image. The images were stored on a cassette tape.

Trying to even review the number of models of digital cameras available today can be overwhelming. However, cameras do fall into a number of general categories. Here are some of the most commonly used categories based on the skill or sophistication of the user:

It is important to know, as is commonly repeated, that the best camera is the one you have when you need to take a photograph.

Now I need to start with some fundamental concepts. First of all, all photographic images on all of the types of cameras depend on the quality of the camera's lens. But the latest camera technology is using software to "correct and enhance" the images from the camera so that it is becoming more and more difficult to tell the difference between an image made with a high-end and expensive camera using a very expensive lens and the image made from some smartphone cameras. Subsequently, the market for high-end DSLR camera systems is crashing and very high-quality cameras are becoming less expensive. Of course, the die-hard professional photographer will still insist that really good photography requires a really good (read expensive) lens system and camera, but for those who do not aspire to become professionals, high quality can be obtained at a reasonable price.

If you are the type of person who reads reviews before purchasing anything, then you will be overwhelmed with reviews about the different camera types available. To add even more complexity to the subject, there are thousands of lens options for all of these different cameras and every lens has its own set of reviews. There are thousands of reviews that compare different models of cameras and lens combinations to each other and other reviews that insist that a certain level of camera and absolutely essential to being a "good" photographer.

But the camera does not make the photographer. One of the newest photographic controversies is raging over the quality of images from Apple's new iPhone 11 Pro and any number of high-end DSLR or Mirrorless cameras. Here is one recent example: "Photo battle between an iPhone 11 Pro and a $7,500 DSLR might surprise you." The difference today is being called "computational photography." I might mention that I opted for a new iPhone 11 Pro rather than purchasing a newer DSLR or equivalent camera and if you take a look at the photos on WalkingArizona.blogspot.com you might have to try and guess which ones are taken with smartphone and opposed to my currently two other cameras; a Sony and Canon.

So what is the answer for a genealogist? If you have a newer camera, say no more than 2 or 3 years old, you probably have all that you really need to take acceptable photos. If you are trying to "make do" with an old, inexpensive camera, you might want to think about upgrading. If you are going retro and insist on using a film camera, there is not much I can do to help you. If you have a huge pile of photographs and need to digitize them, I suggest investing in a good flatbed scanner rather than a camera. If you don't want to upgrade your smartphone, you might consider any one of the below $500 range Canon, Nikon, Sony, Samsung, or Panasonic cameras available.

Stay tuned for more on cameras.

To see some of my images go to Walking Arizona or https://walkingarizona.blogspot.com/