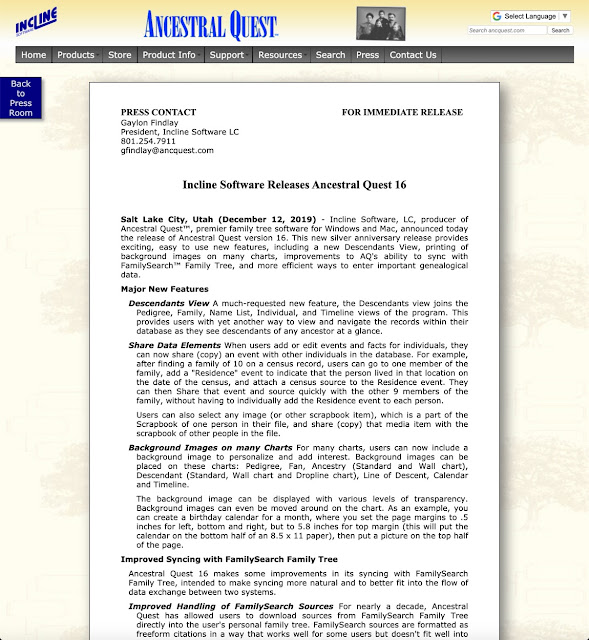 With all the advertising for online family tree programs, there are still those who prefer to do their research using a computer-based program especially of that program will synchronize your information with the FamilySearch.org Family Tree. One of the main advantages of Ancestral Quest just got better. Quoting from the Press Release above:

Ancestral Quest 16 makes some improvements in its syncing with FamilySearch Family Tree, intended to make syncing more natural and to better fit into the flow of data exchange between two systems.

Improved Handling of FamilySearch Sources For nearly a decade, Ancestral Quest has allowed users to download sources from FamilySearch Family Tree directly into the user's personal family tree. FamilySearch sources are formatted as freeform citations in a way that works well for some users but doesn't fit well into the sourcing scheme used by many other users of Ancestral Quest. To overcome this, AQ 16 provides a new option to convert FamilySearch sources into traditional AQ sources during the import process, as well as converting previously imported sources later. For example, if there are 10 members of a family, and all are listed on the 1920 census, then FamilySearch creates 10 different source citations, and if you import them without this new feature, you will end up with 10 source records of the same census record in your list of Sources. If you take advantage of this new optional feature, you can create just one source for the 1920 census, and attach all FamilySearch citations to this single source. This feature is explained in more detail and demonstrated in this video: Advanced Handling of FamilySearch Sources.

Advanced Syncing When exchanging events/facts between a personal family database and FamilySearch, there is a new "Advanced Options" button, which allows users to transfer just the date or just the place for an event. Users also have the option of editing the name of the place before transferring it.

Ancestral Quest supports a number of languages although it comes originally in English and the other languages are downloadable. Ancestral Quest is usually rated high among all genealogy programs by GenSoftReviews.com.
Posted by James Tanner at 7:08 PM