Back in the 1960s Bob Dylan wrote a song called "The Times They Are A-changin'." The opening verse says:

Come gather 'round people
Wherever you roam
And admit that the waters
Around you have grown
And accept it that soon
You'll be drenched to the bone.
If your time to you
Is worth savin'
Then you better start swimmin'
Or you'll sink like a stone
For the times they are a-changin'.
As a group, genealogists are likely some of the most conservative members of our society. I don't mean politically conservative, I mean that genealogy is time consuming and absorbing avocation and leaves little time for many other activities. However, the times really are changing. When I was younger, I was very much involved in stamp collecting. At a very early age, I realized that the easily available media at the time, mostly newspapers, TV and radio, rarely mentioned stamps at all. I did however find that there was a rather developed philatelic news network, primarily lead by Linn's Stamp News, a tabloid sized newsprint publication which I could read in libraries (when I was 9 or 10 years old, I did not know you could subscribe to magazines and newspapers). I also traveled on my bike, across town to attend the meetings of the Phoenix Stamp Club, mostly attended by a group of (to me) really old men. My interest in postage stamps continues to this day, but now all of the information about stamps is online.

My experience with stamp collecting is merely another example of the way our method of obtaining information is changing. If you haven't ever noticed, there is virtually nothing in the popular media about genealogy. Except for an occasional mention of the popular TV show, there is no where in any of the major news outlets that talks about the genealogical community. This is not surprising since very little of local or limited interest gets into the news. Unless there is some bizarre murder or kidnapping a war or political issue including taxes and such, the focus of the popular national and even local media is rather narrow. When was the last time you hear genealogy mentioned on talk radio?

Just like with the specialized publications dealing with philately, genealogy has had its own specialized publications. One of the longest lasting publications was Everton's Genealogical Helper Magazine, which shut down after 52 years of publication. There are literally thousands of other publications, but most of them had and have a very, very limited circulation. If you went to your local public library and looked at their offerings of magazines, it is highly unlikely that you would find even one publication dedicated to genealogy. A search of the catalog of the Mesa Public Library showed that they did not have one genealogical periodical publication. Not one. By the way, they no longer carry Linn's Stamp News either.

There are some very good genealogy magazines, such as Family Tree Magazine, with a respectable list of subscribers, but you will probably never see them in your local supermarket magazine rack.

If the newspapers, TV, radio and other commercial media (except specialty magazines and journals) have ignored genealogical subjects, where do we now get our genealogy news? One word. Bloggers. Bloggers have almost entirely replaced any of the traditional media outlets for specialized news and unless some genealogists goes berserk and shoots up a genealogy library (don't laugh, it happened at the Family History Library), the trend to using Bloggers as the primary new outlet will likely continue.

Case in point, the RootsTech conference coming up in February, is using Bloggers as one of the primary news and information outlets for the conference. Here is a shot of the Official Bloggers as of the date of this post: 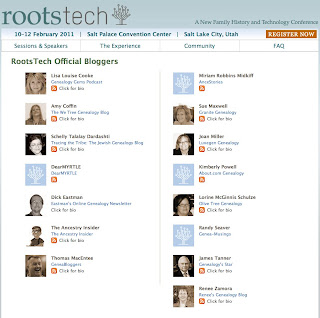 Salt Lake's major newspaper, The Deseret News, shows only two genealogy related articles in December, one of them was an announcement about RootsTech and the other about the updated FamilySearch.org website.

So, if you want to know what is happening in the world of genealogy, click on those RSS Feed buttons and sign up with a reader and start your morning with the genealogy news.