The Calm Before the Storm or The End is Nigh 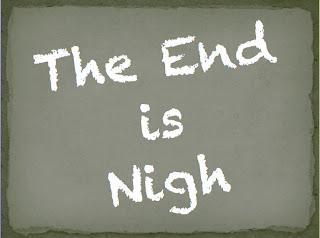 Unless you are almost directly involved in FamilySearch.org's Family Tree program, you are likely entirely unaware of the virtual storm of activity that will occur during the next few months as the connection between Family Tree and New.FamilySearch.org is finally broken. Most of the changes will take place "in the background" as the third-party developers finally have deadlines to convert their programs over to connecting directly to Family Tree rather than New.FamilySearch.org. For some, the changes will be evolutionary and relatively painless, but in many instances there will be crying, wailing and gnashing of teeth.

The greatest impact will be on the members of The Church of Jesus Christ of Latter-day Saints, who will be encouraged and then required to move to Family Tree. The changes also accompany some much stricter policies on the submission of names of individual ancestors who qualify for the Church's Temple ordinances.  This is not the venue to discuss those changes. But the combination of the changes in the programs and the changes in the policies is already having a significant impact on some people in the community.

At the very least, thousands of people who have been resisting making the decision to change over to a new program will find the decision made for them. They will simply wake up one day and find that New.FamilySearch.org no longer works. When that exact day will arrive has not yet been made known, but it is far sooner than it was a year ago and may be sooner than many of those hanging onto New.FamilySearch.org would like to believe.

You might think that after more than a year, almost a year and a half, of talking about Family Tree as a replacement for New.FamilySearch.org, that the actual change over would be anti-climatical, but there are still thousands of genealogists who are blissfully unaware of the entire issue and of course, just like a storm in some other part of the country, they will remain unaware of the entire issue because they don't even know what I am talking about and have never seen or used New.FamilySearch.org. They are in a sense, fortunate, because they will never have to transition between the two programs.

For those who have already adopted Family Tree, the changes will not come soon enough. Many of the present limitations and issues with Family Tree will supposedly disappear when the separation comes. The first stage of the separation, affecting the third-party developers, will occur in about ten days. If the schedule has not been adjusted yet again.

Some of the evidences of the changes are already appearing, like clouds on the horizon. For example, Millennia Corporation's Legacy Family Tree program is coming out with a new version 8. See
Legacy Family Tree 8 Revealed - Q/A, new Tagging options, and other surprises. The announcement has an interesting statement:

What about FamilySearch Family Tree?

If all went as planned, we turned in our FamilySearch integration software to FamilySearch earlier today to begin its certification process. It will be available to everyone (not just the beta test group) when version 8 is released, or even sooner (I don't know yet).

In the face of the announced deadlines it is interesting that this process is just starting. I assume there is a good reason why it has taken so long to convert to Family Tree and I suspect it is a classic chicken and egg problem, you can't really use the new features of Family Tree until the two programs are separated and you can't really separate the two programs until the new features are ready to be used.

Even a storm on the other side of the world can have unforeseen consequences to you personally.
Posted by James Tanner at 6:22 AM