The End of Google Reader 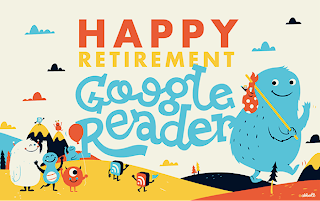 This image appeared in my inbox from Feedly.com. At the same time, I got a notice on my iGoogle page that Reader was now discontinued and should be deleted. Since I had transitioned to Feedly.com some time ago, the end of the Reader app was relatively painless. It is sort of like if Home Depot all of sudden decided not to sell lumber any more. From the users standpoint it seems pretty silly to send all your customers to competitors. But then, I suppose, that Google has some grand plan that will ultimately benefit its takeover of the entire computer community.

Actually, Feedly.com is a much better product than Reader ever was. I don't mind it at all. Too bad, but I won't be sad.
Posted by James Tanner at 9:33 PM