Comments on the Pitfalls of Cutting Your Research Short

In a recent Mocavo.com blog post by Michael J. Leclerc entitled, "Pitfalls of Cutting Your Research Short,"  he mentioned the new Genealogy Standards book from the Board for Certification of Genealogists. Here is the citation to the book:

Board for Certification of Genealogists (Washington, D.C.). Genealogy Standards. 2014.

The other day I wrote a popular post about the new Genealogy Standards book from the Board for Certification of Genealogists. This is very heartening to see. Experienced genealogists get extremely frustrated with a new breed of researcher. These are people who think that discussing quality researching is only done by “elitists” who have no interest in the average person. Many of these people use their blogs and other social media to denigrate quality work, saying that a bit of work online will tell you what you need to know about your family.

He is pointing out a problem that some would-be genealogists are gathering names into family trees and as Michael further points out, "they are actually collecting a number of people who are completely unrelated and putting them into their family tree."

My wife came home from the Mesa FamilySearch Library yesterday with just such a story. Where an online program had suggested a connection and the patron had incorporated the record and the information into her family tree without a moment's evaluation. My wife had quickly detected the error and suggested that the information was not correct.

I have this same issue reproduced in what is presently showing for all the world in FamilySearch.org's Family Tree. This particular problem originates from an entry in a book about one of my ancestors. The book is as follows:

Parkinson, Diane, and John Parkinson. James Parkinson of Ramsey: His Roots and His Branches : England, Australia, America : a Biographical History and Genealogical Record of the Family of James and Elizabeth Chattle Parkinson. Austin, Tex: Published for the James Parkinson Family Association by Historical Publications, 1987.

Here is an image of the page in question. You can see the page clearly by clicking on the image. 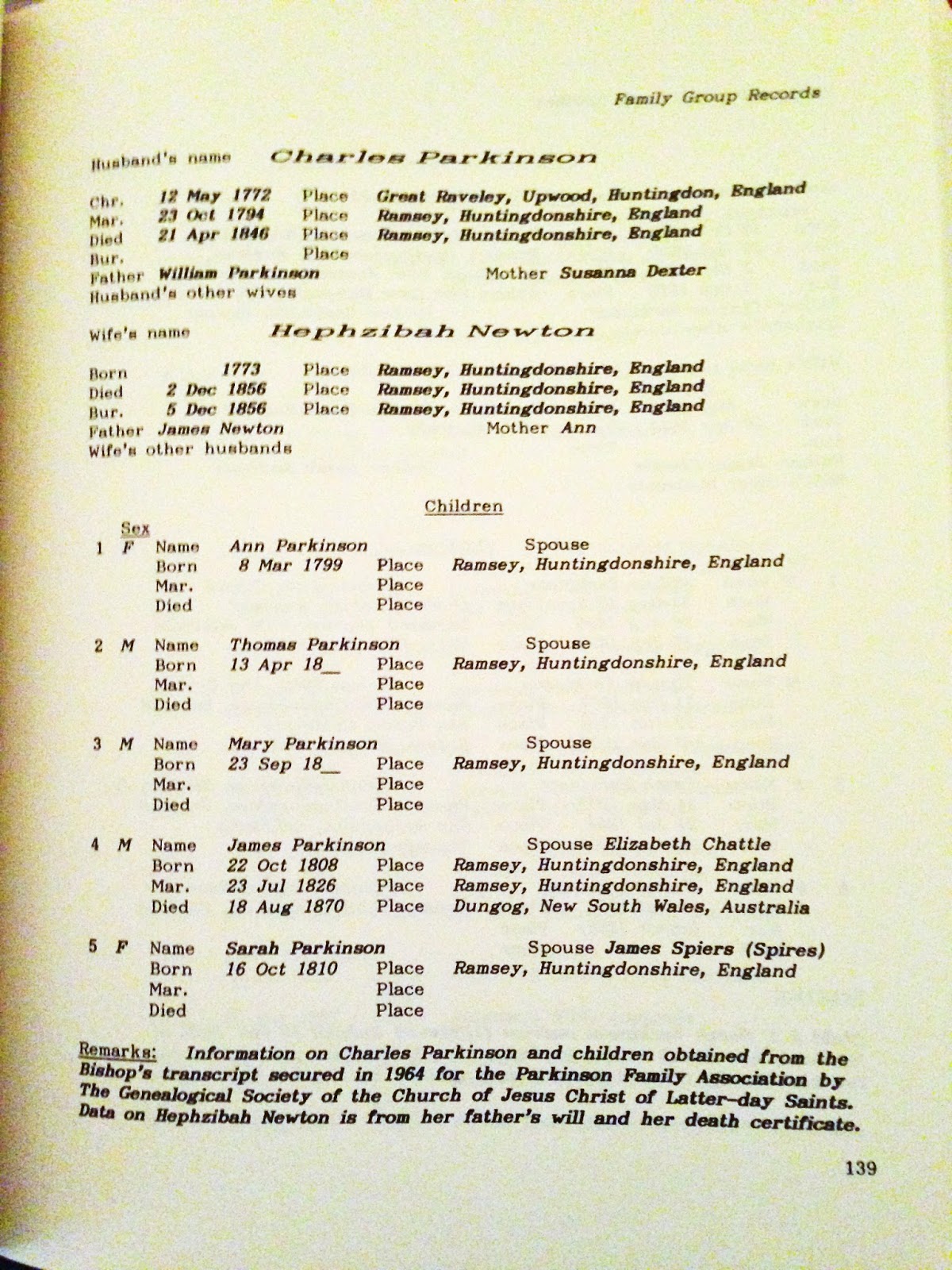 The family group is shown with child No. 3 listed as "Mary Parkinson, b. 23 Sep 18_, no death date in Ramsey, Huntingdonshire, England and with no spouse listed.

Now, if we go to FamilySearch.org Family Tree and look at the same family we see some significant additions and differences. Here is the list of names and dates for the same family of Charles Parkinson and Hephzibah Newton:

Again, looking at Mary Parkinson and going to her entry in Family Tree we see the following:

Marriage to James Quemby with a daughter, Mary Quemby, born in 1852.

OK, so there are no sources for any of this information. But Mary was christened when she was 24 years old and had a daughter when she was 52? James Quemby is listed as being born ABT 1800 in England with no other dates and no other information at all and no death date. I checked for duplicates of James Quemby and there appear to be none. If was nice that he and his wife were finally able to have a daughter when they were 52 years old.

If is clear that this whole entry is bogus. The dates and even the places (which I haven't mentioned) are fictitious. This is certainly not the fault of the Parkinson book. When I look at the history of the daughter, Mary Quemby, I see the notation that "This child was added when these people were merged." No source. No further explanation.

What do I do with this information? Take out all the relationships and dates? What is my source for doing all this? Obviously, there is more research needed, but I have literally hundreds, if not thousands of similar situations and examples in Family Tree alone, not to mention Ancestry.com and MyHeritage.com and all the other related family trees I have online.

Unfortunately, I can take almost any pedigree, at random, and find the same types of errors and the same unsupported additions.