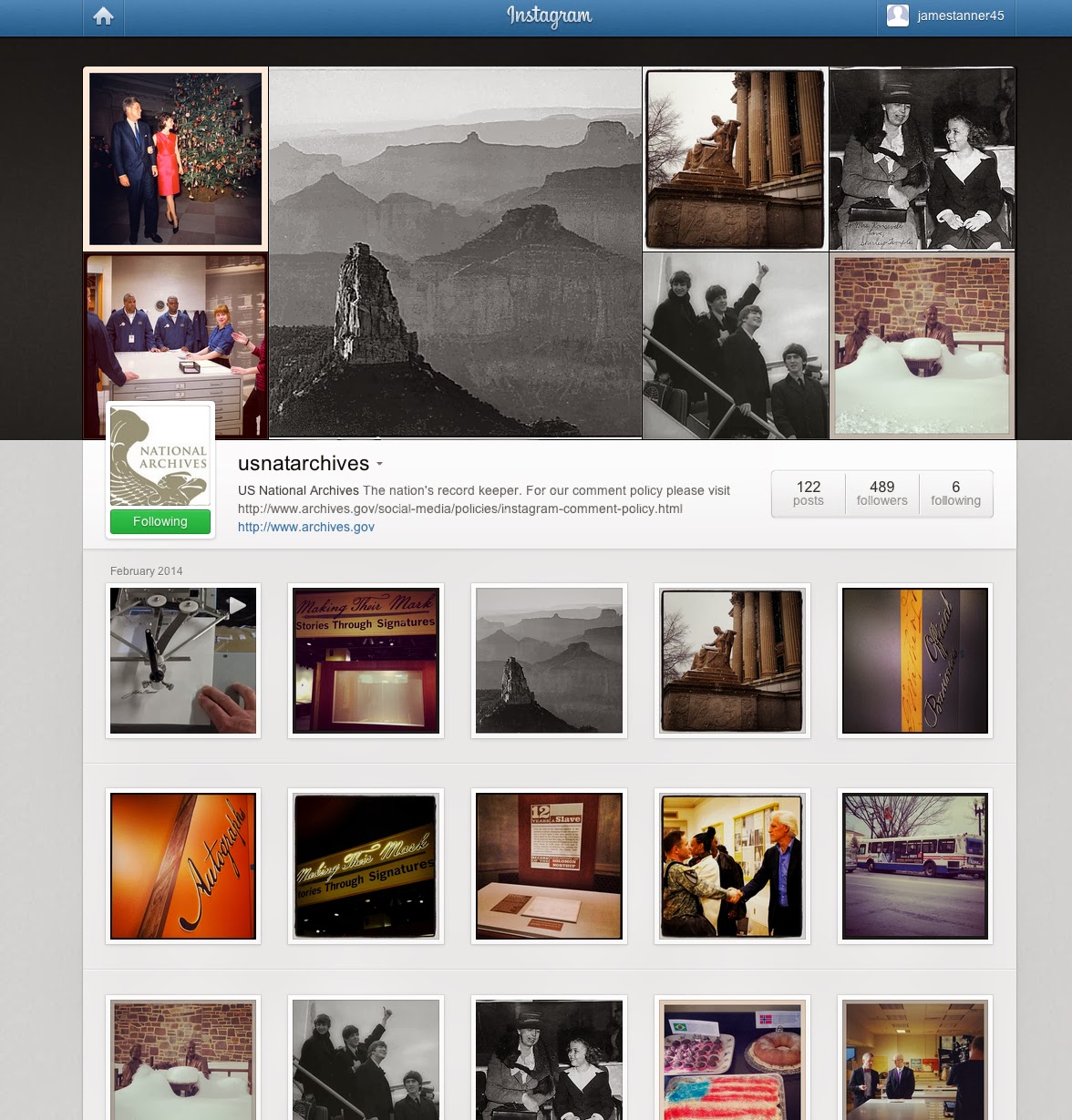 Sometimes there are online announcements that seem important and other times I have to wonder what in the world is going on. I got a news stream notice that the U.S. National Archives is now on Instagram. Perhaps you are not yet "into" Instagram. Wikipedia describes the online website as follows:


Instagram is an online photo-sharing, video-sharing and social networking service that enables its users to take pictures and videos, apply digital filters to them, and share them on a variety of social networking services, such as Facebook, Twitter,Tumblr and Flickr. A distinctive feature is that it confines photos to a square shape, similar to Kodak Instamatic andPolaroid images, in contrast to the 16:9 aspect ratio now typically used by mobile device cameras. Users are also able to record and share short videos lasting for up to 15 seconds.

I have commented from time to time about the somewhat feeble efforts the National Archives has made so far to digitize and make available online their huge content. There are, of course, some notable exceptions, but by and large the vast bulk of the records are only available directly on paper (or whatever) at the main National Archive locations and branches around the country. For example here is a summary of the holdings from the National Archives website:


Laid end to end, the sheets of paper in our holdings would circle the Earth over 57 times! In addition to all of this paper, we have:
The volume grows at about 1.4 billion pages per year. Creating copies for our web site, and preserving those copies, simply exceeds our resources at this time.

To see what is being done to put all this online, excluding of course the present Instagram photos, see Digitization at the National Archives (NARA). The list of documents digitized so far is listed on the page entitled "Microfilm Publications and Original Records Digitized by Our Digitization Partners." You might note from that page that the "partners" are Ancestry.com and it's subsidiary Fold3.com almost exclusively.

To give you an idea why I call the effort feeble, here is a statement from the webpage entitled "Additional Digitization Resources"

That is 126,500 out of the 3.5 billion electronic records not to mention the rest of the listed holdings.

Interesting that the State of Washington Digital Archives currently has 49,491,647 searchable digital records online and the National Library of Australia on its Trove.nla.gov.au websites has 389,478,396 online resources. Apparently, the United States Government does not put much of a priority on fulfilling the mission of the National Archives to make its holding available to the public.

Aren't we glad they are putting photos up on Instagram!
Posted by James Tanner at 7:10 AM