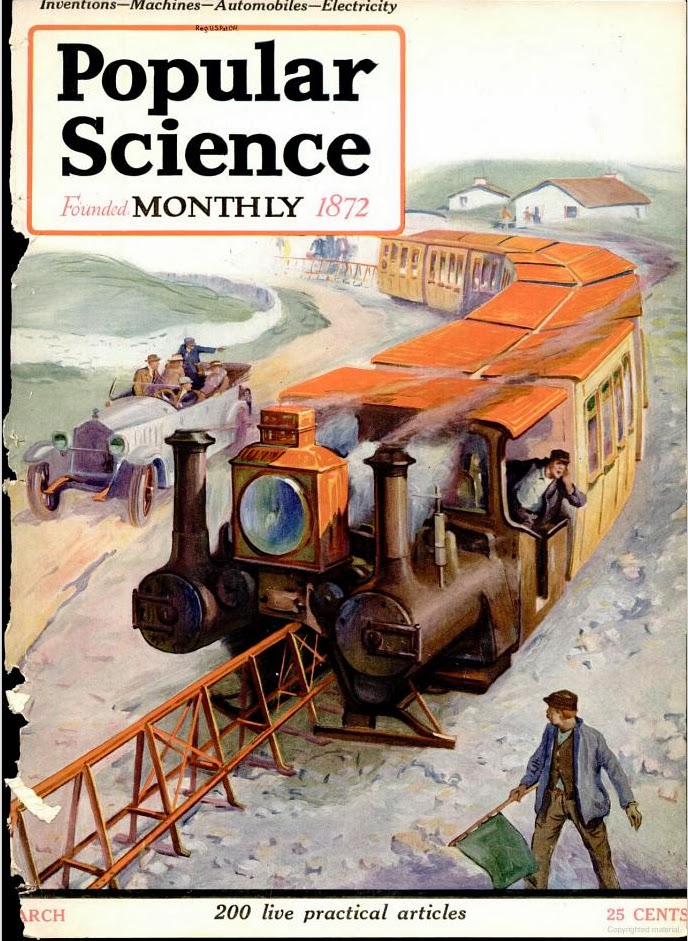 Nathan W. Murphy raised quite storm of comments about a blog post on FamilySearch entitled, "Family History in 2050: DNA's Impact." It is apparent that the commentators do not share Nathan's view of the future and, like many in the genealogical community, take themselves way too seriously. I have been a Popular Science reader for years. Not quite as long as this March, 1921 cover, but for a very long time. I am quite used to their "predictions" about the future. I guess that their accuracy for predicting the future is extremely poor. This is mainly caused by developments, such as computers, that no one could accurately foresee. Likewise, predicting the future of genealogy is just a risky, but still entertaining. I am afraid that I do not share Nathan's Utopian view of the future impact of DNA on genealogy, not because it might not happen, but simply because 2050 is way too soon for such a change.

You might have noticed in one of my recent posts that I made a reference to science fiction. Even if you are not a science fiction fan, I might have you recall two movies that were popular a few years back: 2001, A Space Odyssey and 2010. I might remind most of you that it is now 2014 and almost all of the events depicted in both movies are just as far in the future as ever. Nevertheless, some changes have been spectacularly more dramatic than Arthur C. Clarke or Stanley Kubrick imagined, such as SIRI on my smartphone, but space travel involves huge investments in an endeavor that has yet to prove economically viable.

Likewise, technological developments are unpredictable both in their possible occurrence and in their impact. Genealogy is a very, very conservative pursuit. If you want to know the reality, think about how many people are still using Personal Ancestral File. I taught a class yesterday on Social Networking and Genealogy and some of the class members did not have even one social networking account, not even Facebook. My prediction is that in 2050, just a few short years away, there will still be a substantial segment of the genealogical community that will never have heard of DNA and will still be doing almost all of their research recording on paper.

DNA will only become valuable for genealogical research to the extent that the paper (online or physical) research is done in a way that complements the DNA results. For example, all the DNA tests in the world today will not correct the errors in the online family trees now in existence.

Thanks to Nathan for his entertaining look at the future. Without such glimpses into the future we would be complacent with the present and fail to embrace new technology when it is manifestly superior to what we have now. But just like Popular Science's monorail and very frequently featured flying cars, some developments just never seem to have a general impact on society and sometimes the real changes come from very surprising and unanticipated developments.
Posted by James Tanner at 7:02 AM