Restoring or repairing old photographs, some of the issues

I received a comment concerning an interesting website called Top Hat Photo Repair. The website shows some good examples of what can be done with old photographs.

As I explained in my email back, there are a lot of concerns about photo editing. Simply because the software tools exist to modify photos, that does not mean that the changes made to an image are acceptable or even ethical. The commentator acknowledged that any original, even a scan of the original physical photograph, should not be altered in any way. That is a basic starting point for discussion on the issue, not only do I have concerns about the existence of an altered original but I also have my concerns about the existence of an altered copy.

My point is simple. Whatever is done to a photo, as much as possible, the original physical photo should be preserved and an unaltered digital copy should be archived and left unaltered. With today's technology, the copy should be saved as a RAW image or at the very least, a TIFF image, preserving, as much as possible, all of the visual information that is captured by the camera or scanner.

Before getting into any thing technical, I have to acknowledge that there is a natural tendency for people to want to want to "repair" photos that have physically deteriorated. Here is an obviously damaged original photograph. If this were your ancestors, would you feel compelled to alter (i.e. repair) the photo? 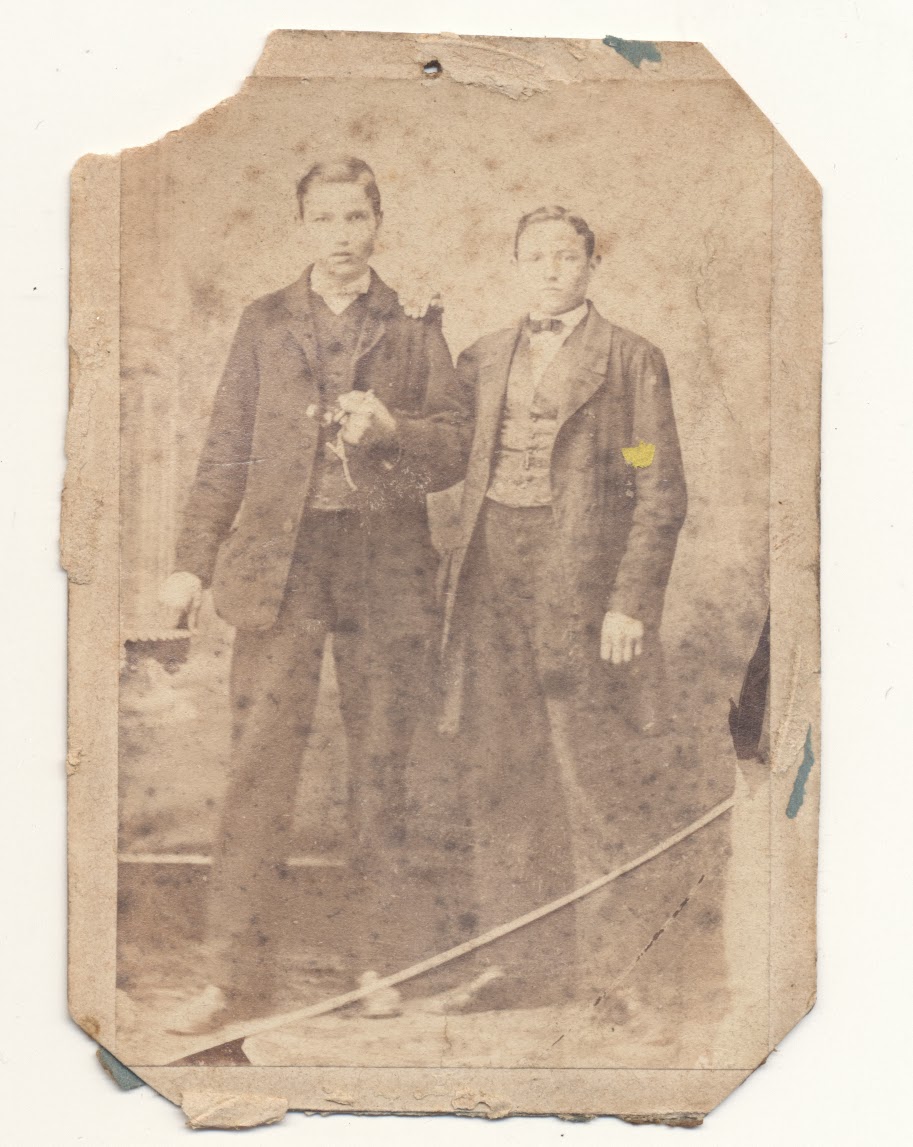 I would put photo editing into various levels. Here are some of the different levels or aspects of photo editing.

Level One: Making an image viewable. At the very threshold of the editing process, digital manipulation tools can improve an image that is almost invisible. Let's take the image above and give an example of clarifying an faded image. Here I used Adobe Lightroom to apply some filtering. I added some contrast, changed the exposure levels, added some clarification, adjusted the tone curve and brought out the shadows by adding some light. Here is results of these basic manipulations: 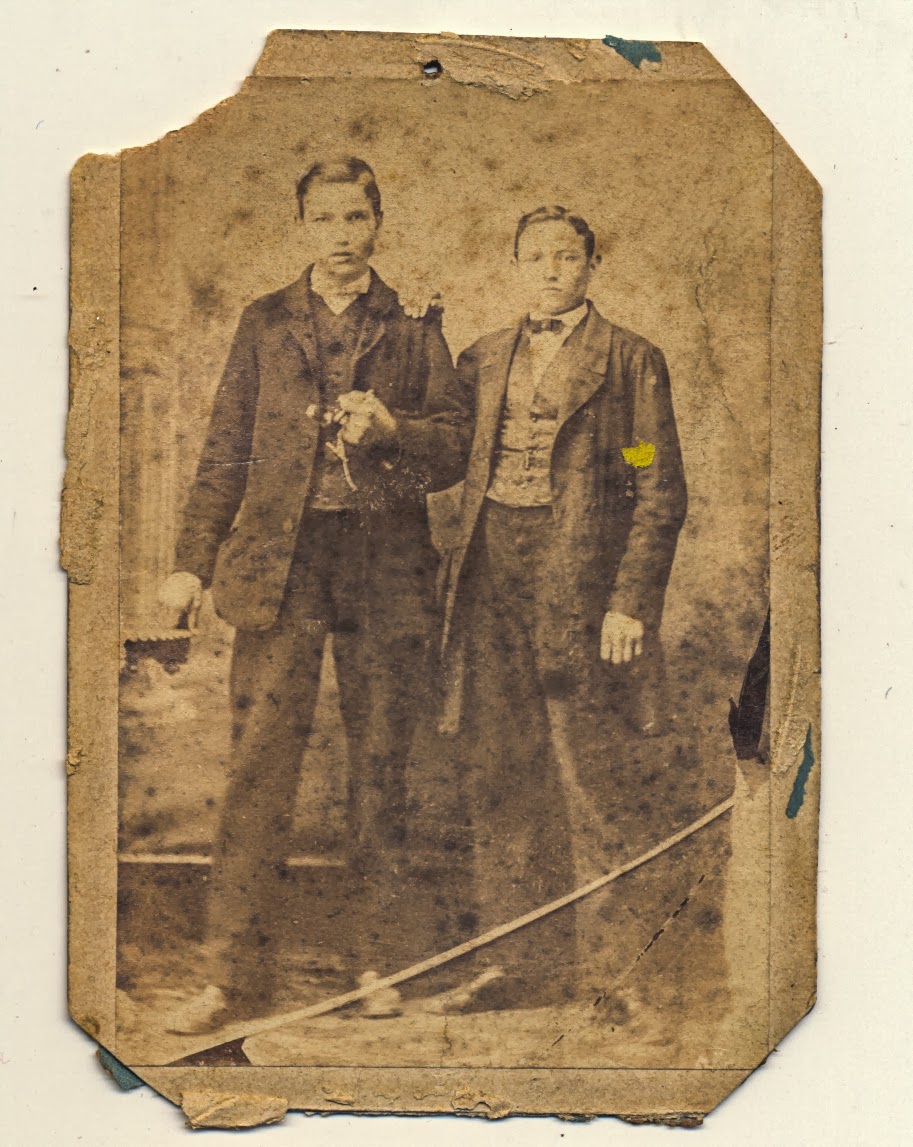 Now, the issue is one of distinguishing between preservation and restoration. It is also an issue of the extent to which photo editing should be done in the preservation/restoration process. I wrote about the ethical issues of photo editing back in 2011 in post entitled, "The Ethics of Photo Restoration or Editing." This is an issue that needs to be revisited from time to time.

Level Two: "Repairing" the defects in the photo. Here is where I part with the restorationists. I would leave the photo untouched, blemishes and all. I do, however, recognize that most people would want to make the photo look "nice." When do the changes cross the boundary from appearance to altering the historicity of the photo? Here is a 500% magnification of the image done in Adobe Photoshop, showing a small portion of the photo where there is an obvious damaged area. It looks as if there is some kind of paper or material stuck to the front of the photo. Am I ethically allowed to remove that area of the photo with the vast photo manipulation tools I have at my disposal? What do you think? What would an archivist think? 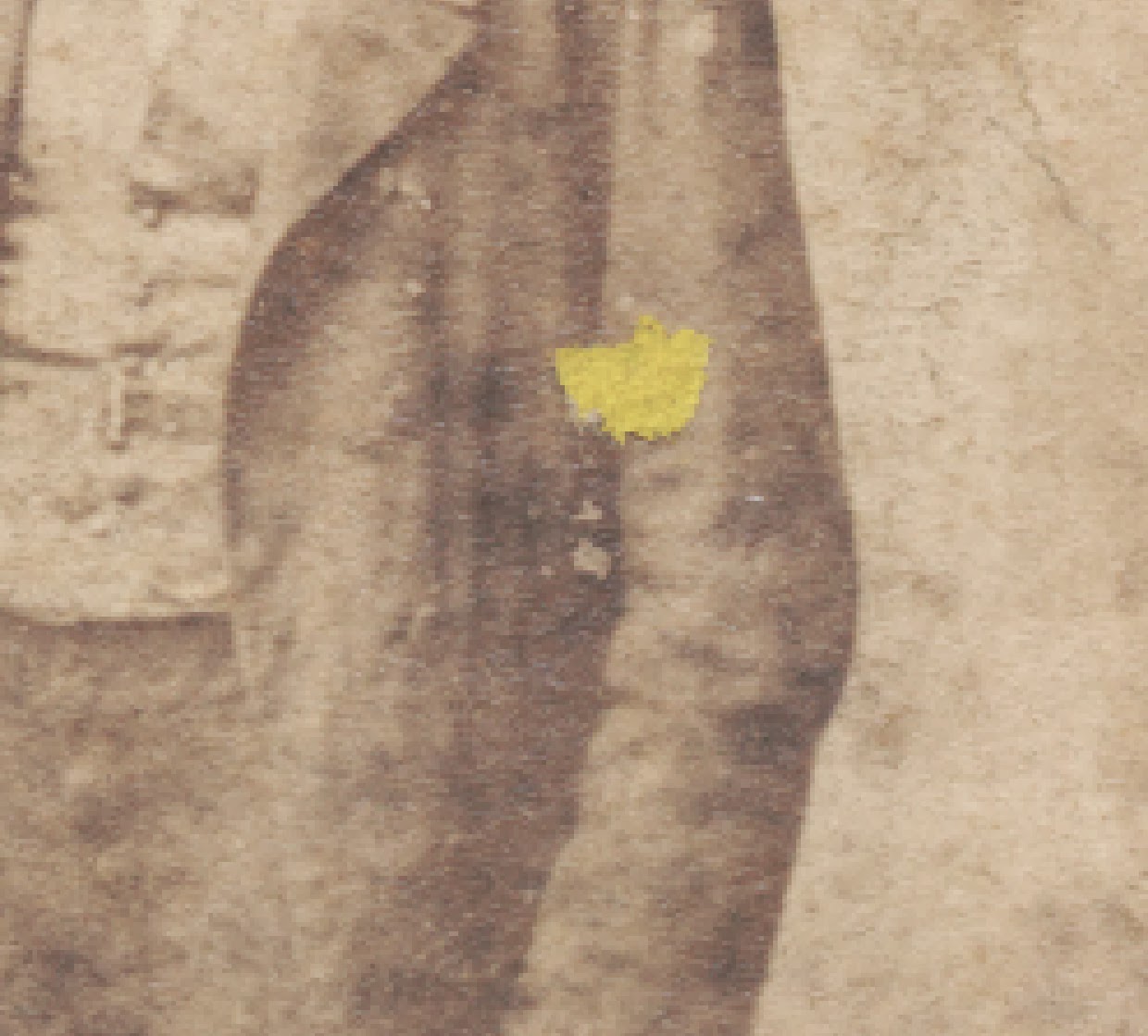 When I have the time and the inclination, I would put myself into the "expert" category for image manipulation. I have been working on photos with the available software since the release of Adobe Photoshop 1.0 in 1990. Here is the same spot with even larger magnification, to the point where you can see the individual pixel elements. 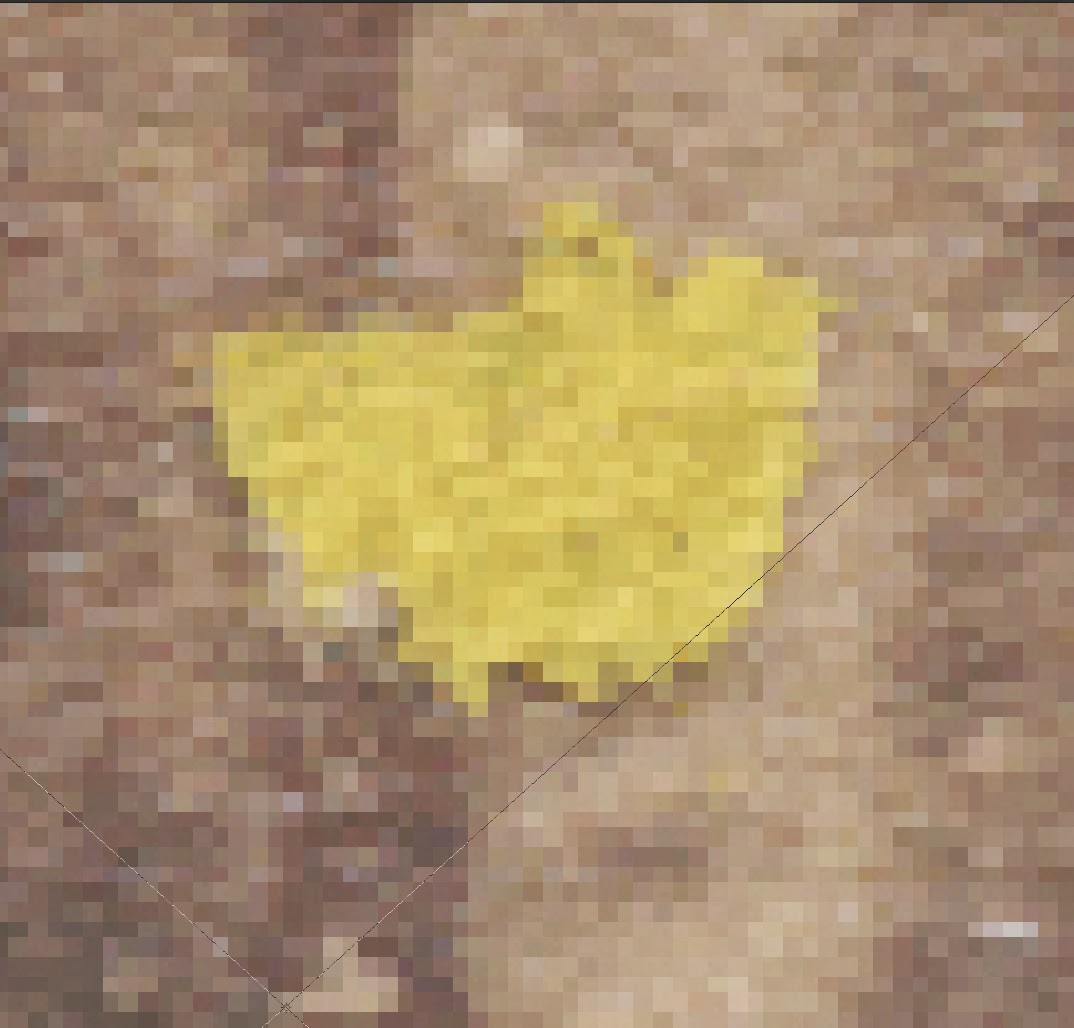 Here is what happens to the photo if I decide to edit out the yellow spot. This was a "quick and dirty" edit. If you look very carefully at the place where the spot was located, you will see that there is still a little work that needs to be done. I can make it look more "natural" by making a few more slight changes. Here are the further changes. 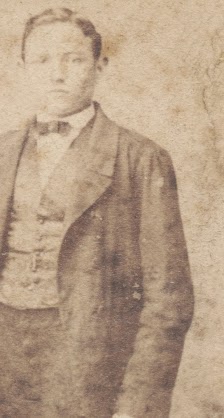 Am I justified in making these changes to the original out of esthetic considerations? Do the esthetics override any ethical issues? What about the rest of the "artifacts" (blemishes and extraneous items) in the photo? Should I spend the time and take them all out? At what point does the image cease to be an original photograph and become my own creation?

Now we get to the next level.

Level Three: Actually changing the image to suit our present sensibilities and prejudices. In the above photo, it seems obvious that there is considerable "damage" to the original images. The boy on the left is holding something in his hand. It looks like a cigar. What if I decided to resolve the issue and simply remove the item from the photo? Like this: 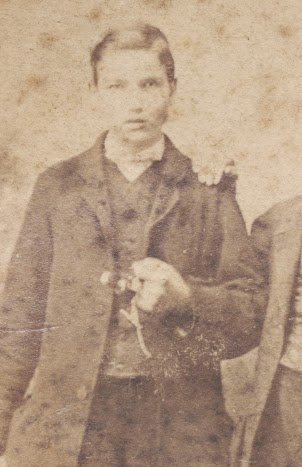 We could go on and on. But the point is that where do we stop? What if I decided to change the color of the photo, like this? 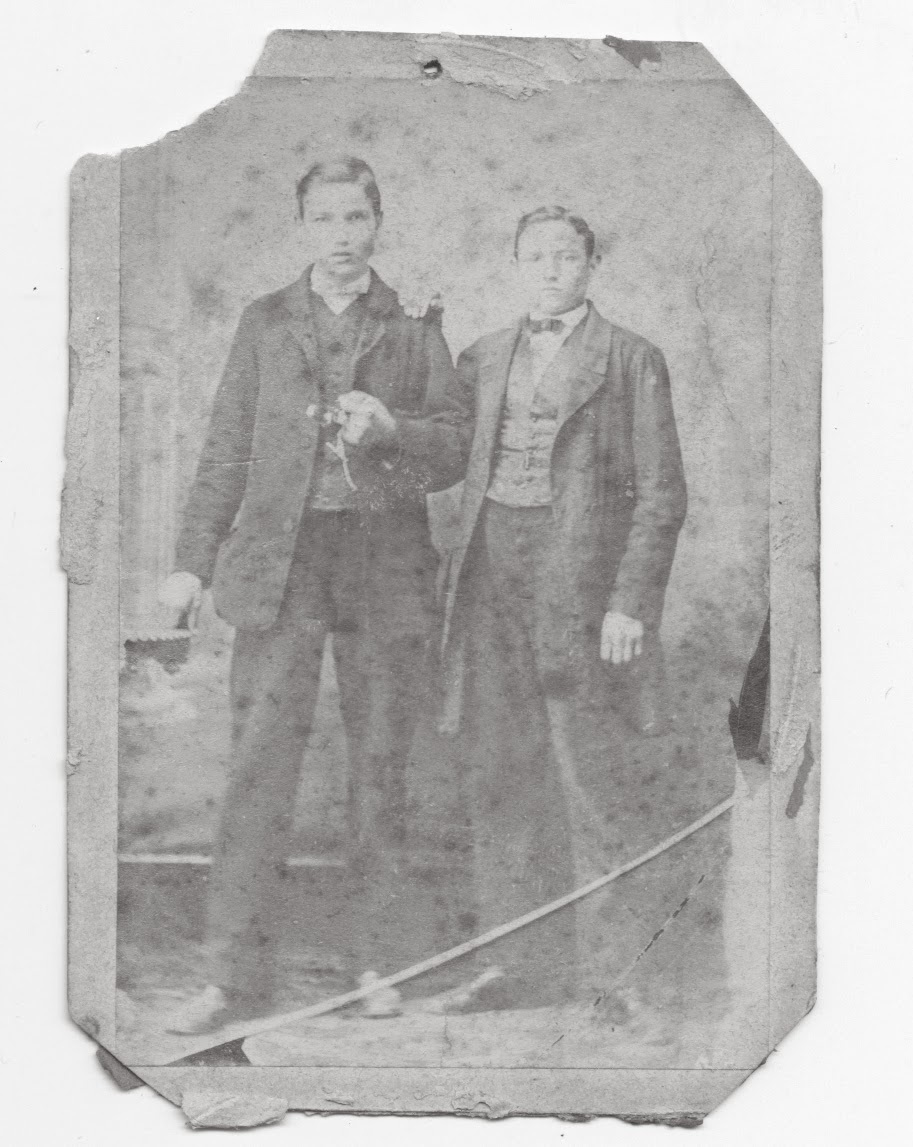 Is that permissible? Actually, all of the old "black and white" images are really a distinctive color and I scan all my images as color to preserve the original look.

Well, I could go on but there are mainly individual issues that must be resolved by the owner of the photograph. Meanwhile, millions of altered photos go online every day.
Posted by James Tanner at 12:44 PM