For the most part, as genealogists, we are a complacent and pretty self-absorbed community. For that reason, there are a few undercurrents of important issues that go mostly ignored. Among the issues lurking in the outer limits of genealogy is the fact that the structure of our genealogical databases, inherited from the old paper forms, does not fit many of the world’s kinship systems, even some of those that come from Western Europe where the paper forms originated.

On one of my recent trips, I was listening to and audio book of the book, Mandela, Nelson. Long Walk to Freedom. 1994. In the first few chapters of the book, he outlines his family’s genealogy and makes reference to his kinship system. I realized immediately that what he was describing would be nearly impossible to duplicate in any of the existing genealogy database programs. To put this problem in the perspective of the Black African’s terminology, this was just another example of European-centric imperialism imposing their cultural mores on the “natives.”

I have written about this issue previously but it has been some time and it is time to write again. Here is the Google definition of a kinship systems. See Google Search on Kinship Systems Definition.

For example, on the startup page of the FamilySearch.org website, there may appear an invitation to use Puzzilla.org to "find your cousins." Who is and who is not your cousin? As genealogists, we consider a descendent of one of our grandparents (great-grandparents etc.) to be a "cousin." Does this definition apply to all the world's kinship systems? What if your grandfather had more than one wife? Are his grandchildren through a second or third wife, not your direct grandmother, your cousins? If your father had more than one wife, what is your relationship to the other wives who are not your mother? What if your society recognized plural marriage as was the case with Nelson Mandela's family?

Now the question is how do you represent these relationships on our "standard pedigree chart and family group charts?" Since I last wrote about this subject there are some attempts among the genealogical database programs to adjust to these issues, but still from a very European perspective. For example, the relatively new program from Heredis.com, has, what they call, the Extended Family View:

This new and more comprehensive view of your family shows its composition as a whole: siblings, remarriage, stepchildren, step- brothers and step-sisters, children from other unions of the different spouses… noting or not when they belong to the direct lineage. All the people with whom they lived, all those who they knew are in the extended family. A practical tool for analyzing re-marriages in the family.

Here is a screenshot of part of my Great-grandfather's family. Note, he had two wives and his father had five wives. 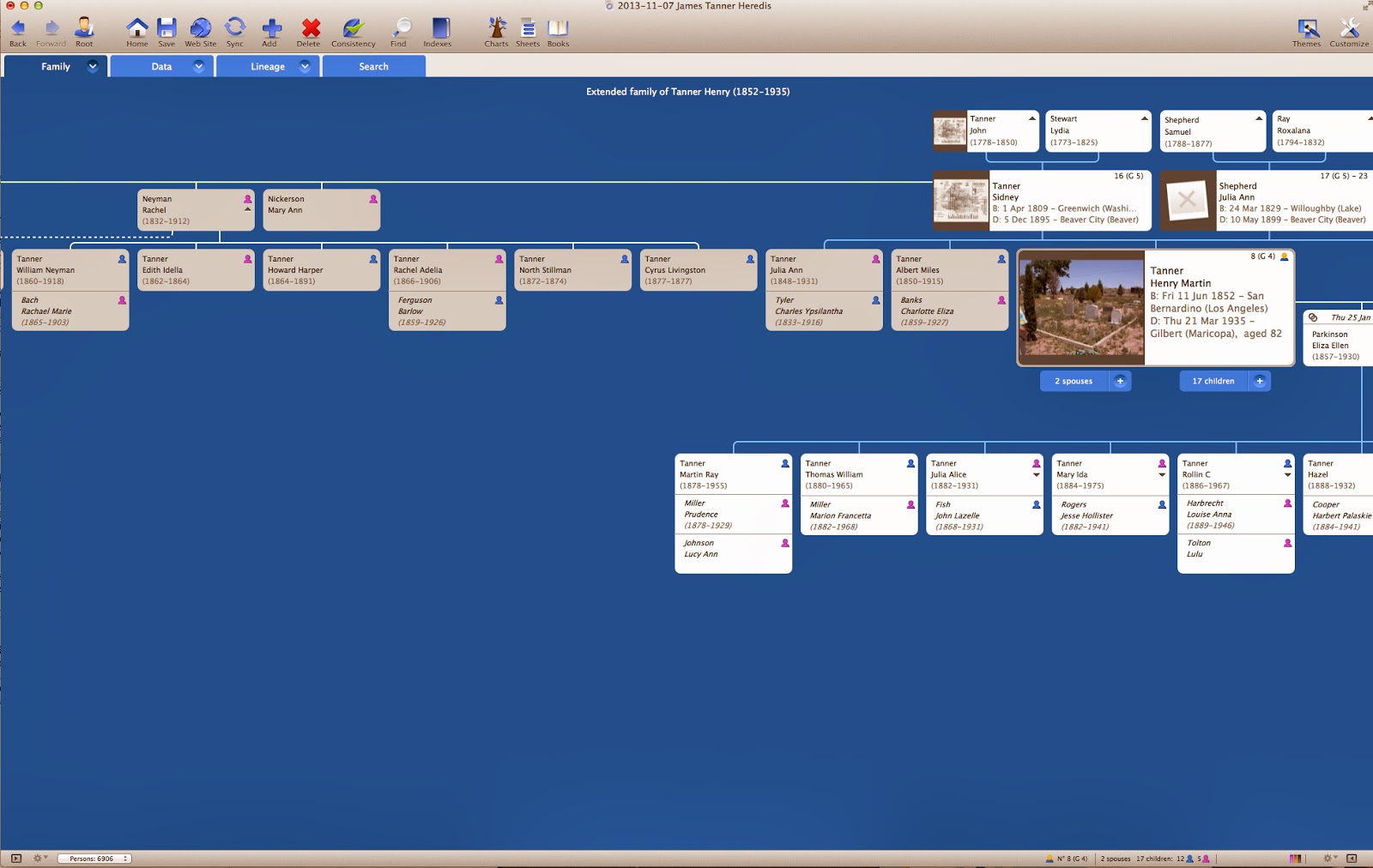 Another example would be the Haida, group of people who lived primarily in the Queen Charlotte Islands off the northern coast of British Columbia. Here is a brief description of their kinship system:


In the sense of "maternal grandfather," the term is extended to all men of the second ascending generation and upward in the opposite moiety, and in M also sometimes to men of the first ascending generations except those of the father's clan, who are call ye' (paternal uncle). In the sense of "paternal grandfather," however, it refers specifically to the father's father, who must, of course, belong to the speaker's moiety though not necessarily to the same clan.

See, American Anthropologist, New Series, Vol. 36, No. 3 (Jul. - Sep., 1934) "Kinship and Social Behavior among the Haida," George Peter Murdock pp. 355-385 (31 pages) p. 357.
There is, of course, an argument that we can ignore all of this and simply view human family trees from a strictly biological basis. Are we then to ignore the true culturally determined relationships? Let's just throw all that out and impose our own world view on the rest of humanity.

But, you say, I don't have to deal with that so why should I care? Well, I would submit that those of us who are living in the United States today have just as complex a kinship system to confront. You can read the National Vital Statistics Reports, Volume 62, number 9 from the U.S. Department of Health and Human Services, Centers for Disease Control and Prevention, Births: Final Data for 2012. This compilation of statistics says:

This says that 40.7% of the children born today in the United States are born out of wedlock. What is the kinship system of these children? How will we be accounting for their families in the future as genealogists?

We have some real issues here.