I have been going back into my family tree for a couple of years now documenting each successive generation. This persistent documentation has resulted in an interesting discovery. Every single family line on every single online family tree eventually reaches a point where there is absolutely no documentation and successive generations are pure speculation or fantasy. In short, genealogists or would-be genealogists feel compelled to add generations of "ancestors" that are entirely fanciful. My question is why? My initial reaction is to attribute this consistent lack of reality to perverse ignorance. But I think the reasons are much more complex than simple stupidity or ignorance.

One facile excuse is the unexplained phenomena of "same name = same person." But again, I think the issue goes well beyond that excuse due to the consistency of the issue. Before I go further, let me illustrate how completely universal this problem has become. I fully realize that my comments in this regard will be assumed to be founded in elitism and snobbery. But without knowing it, I encountered this phenomena many, many years ago, before online family trees even existed. Having so much "genealogy" easily accessible online merely puts this entire problem in plain sight.

In choosing these examples for illustration, I rely on a number of factors that indicate fantasy. Here is a sample list of some of the criteria for my determination that an online family line has passed over boundary of reality into fantasy.

I could systematically go through every single line on one of the online family trees and show that some other line continues past the point of reality, but fortunately, I have several unified online family tree programs that I can use an examples. However, in this case, I will confine my examination to the FamilySearch.org Family Tree due to the ease of illustrating the issues.

This is an easy example. I spent a considerable amount of time examining and researching this line beginning many years ago. My investigation showed that the most distant Tanner ancestor appears in Rhode Island in about 1680. Here is what is presently in the Family Tree. 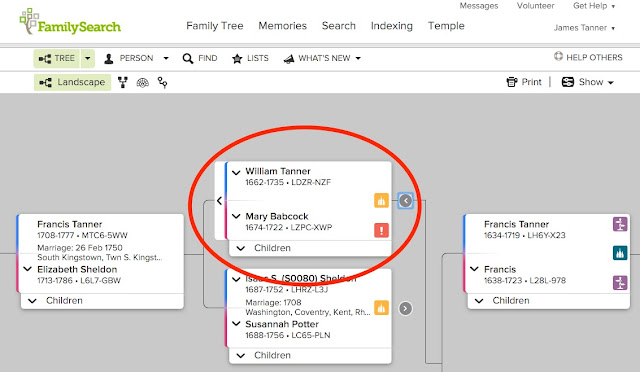 This is my most egregious example due to the fact that there are so many conflicting opinions about this family. I will mention that "William Tanner's" pedigree continues back into the past from this point for five additional generations ending with a Matthew Tanner supposedly born in 1510.

The first problem with this line is the red icon that shows that the listed mother, Mary Babcock, was born when her listed father, "James Hall" was four years old. 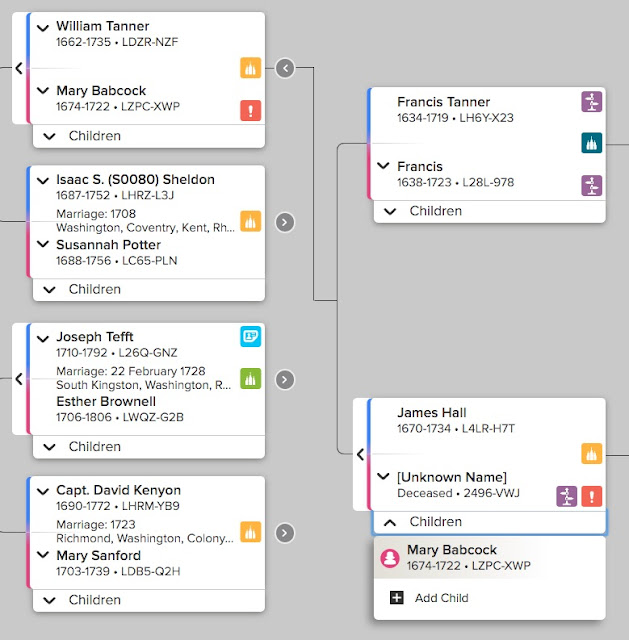 There are ten sources listed for William Tanner (b. 1662, d. 1735). If you assume that these are accurate dates for his birth and death, how do you account for the existence of a photograph? 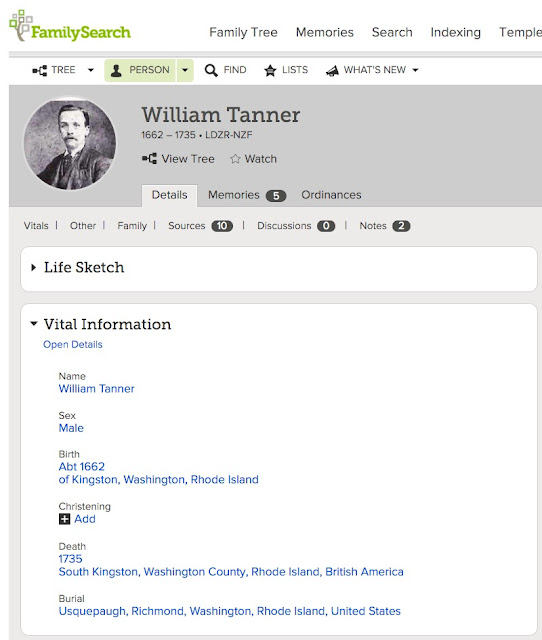 If you do not see the point of the last question, perhaps you are part of the problem. Just to start, I happen to have personally visited the documented gravesite for William Tanner and his two wives in West Kingston, Rhode Island. So I do not have to go too far to demonstrate that the information is not only impossible but also incorrect. Further, the entries show four wives, one of which is unknown. 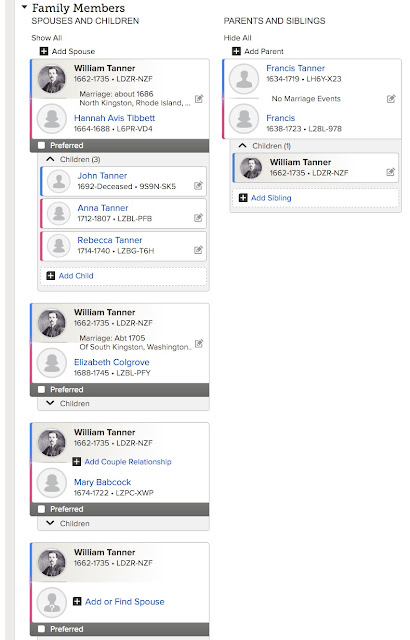 Interestingly, all of the sources listed for "William Tanner" are for someone known as Nathan Francis Tanner. 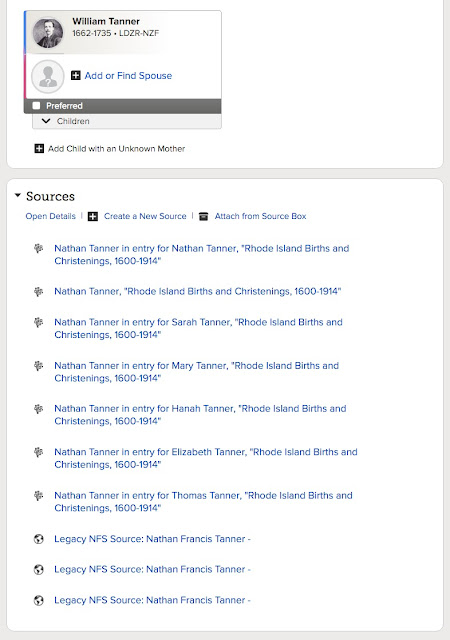 Sources do exist for William Tanner but so far none of my esteemed relatives have seen fit to add them to the program. I have been purposefully ignoring this program because there are possible duplicates that cannot be merged at this time. I am also ignoring the problem because the line actually ends with Francis Tanner, (b. 1708, d. 1777) and there is no positive evidence that the William Tanner found in Rhode Island in 1680 is his father. There may be one more generation between the original William Tanner and Francis.

Must I point out that there are presently no records that connect my William Tanner line to anyone in England although the present condition of the Family Tree shows him with a father born in 1634 in Rhode Island, United States for which there are no sources cited. By the way, the official name of Rhode Island is the "State of Rhode Island and Providence Plantations." It is also interesting that the supposed father, Francis Tanner was born in Rhode Island is 1634, two years before the arrival of Roger Williams from Massachusetts. It is strange that history makes no mention of the fact that the Tanners had already settled Rhode Island when Roger Williams arrived!!!

So here we have graphic illustrations of most of my points outlined above. Despite claims to the contrary, the parentage of William Tanner has never been established and those claiming to have identified his parents in England have never produced one document or other record connecting William Tanner to England or any other possible place of birth.

I may have failed to mention that in some cases the family lines just stop. This is a very reasonable situation and is much more preferable than making up further connections. But unfortunately, rather than admit defeat, there seems to be a tendency to continue onward with fantasy. Why?

This post is already getting long, but I will venture one more example. My Morgan line on the Family Tree goes back to 1700 to a person named "Capt. Richard Morgan" who happens to have no sources listed. However, the line actually ends with Garrard Morgan born in 1755 supposedly in Virginia, three generations earlier. Interestingly, the father shown for Garrard Morgan was supposedly born when his father was only 11 years old. 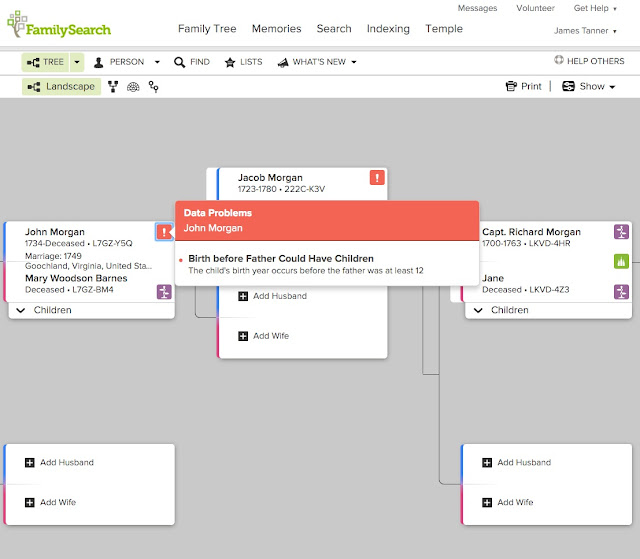 The John Morgan shown here has nine possible duplicates in the program. 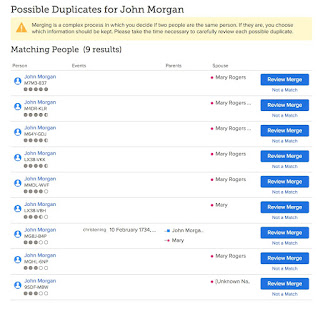 By the was this John Morgan is shown as being born in Shepardstown, Berkley, Virginia in 1734. If you bother to check, Shepardstown was first settled by Thomas Shepherd in 1734 where he established a town called Mecklenburg and was first given a charter for the town in 1762. Check it out.

Irrationally, I could go back on every single line and except for the few that end before the fantasy takes hold, I could give the same, exact types of examples. Why?