An Illusion of Progress

A "wireless" charger that has a wire! Sometimes, so-called, advancements in technology appear to be illusions. Shown above is one of the newly introduced wireless chargers. The new Apple iPhone 8 and iPhone 8 plus are being touted to support this "new" wireless charging. But as you can see from the image, the wireless charger itself has a wire to plug in. In effect, in order to take advantage of this new technology, I would have to purchase a device I do not presently own, i.e. the wireless charger, and then the only device I could use with that new technology would be a new iPhone 8 or 8 plus. In a related topic, you might also notice that computer device and TV ads do not show cables. Here is an example for an almost $20,000 TV

Now, what in the world does this have to do with genealogy? Plenty. Genealogy is a hair on the tail that is being wagged by the dog. The dog, in this case, being "advancing" technology. One of those tail wags includes the rush to DNA testing. Beyond that, genealogical computer users are now in the midst of another major hardware and software upgrade whether they realize it or not. Incidentally, we just went through the abandonment of microfilm shipments by FamilySearch. Genealogy is hardly immune to the changes imposed by advancing technology.

But how much of what is going on in technology is really an advancement and how much is actually window dressing? This is a pertinent question, especially for that huge group of genealogists who, for a variety of reasons, are either unaware of the technological changes or do not care to participate.

In the genealogical context, the easiest of these technological advances to criticize is the fad of DNA testing. Yes, DNA tests can be used to "find" close relatives. But here is one example of why simply having a DNA test does not magically find your relatives and their connection to you in the form of a common ancestor. I currently have 187 DNA matches from a popular testing company (I am not picking on any one company so I will refrain from naming names). Out of the first ten of those 187 matches, seven of the ten have only rudimentary family trees and the program indicates that I can contact these people for more information. Without a family tree in the main online hosting program, their DNA tests are essentially worthless. In addition, the closest relative show by the tests has a percentage of shared DNA of only 2.4%. Whereas, in those few cases where there these people have a family tree, it takes only a glance at their family tree to see the common ancestor who, in every case, is my well-known great-grandparent. No new information here.

Yes, I know. I could spend my time and my money to expand my DNA testing results and compile charts and such to show more remote relationships, but what is the point when I have already done the work showing those same relationships? Oh, you say. "You are the exception." Most people can find unknown connections with DNA testing. Yes, that may be the case with some, but those people who do not have enough interest in genealogy to have a family tree online are not part of those who might benefit.

I realize that I am picking on DNA testing, but there are several other current topics that involve technology that are not really an advance. One more example. In this case, I am forced to name names. FamilySearch is digitizing their microfilm collection. This is an inevitable development and no question that there are some advantages to the digital format. But here is what is happening in many cases to make this advancement an illusion. In the past, I could order a roll of microfilm and view the microfilm with a viewer in a designated Family History Center. I had to pay for the rental of the microfilm and wait until it arrived at the Family History Center. Now, today, that same microfilm roll has been digitized. But because of the limitations imposed by legal or political issues, I cannot view the digitized roll anywhere but in an authorized Family History Center or Library. Hmm. Isn't this sort of a wired wireless advancement? I have a new device, but I still have to do something to take advantage of the benefits. Mind you, I am not criticizing FamilySearch, they are not the problem. They are doing what they can. Here is a screenshot from FamilySearch showing that this list of former microfilms has been digitized, but at the same time, showing a key icon that the film can only be viewed in a Family History Center or Library. 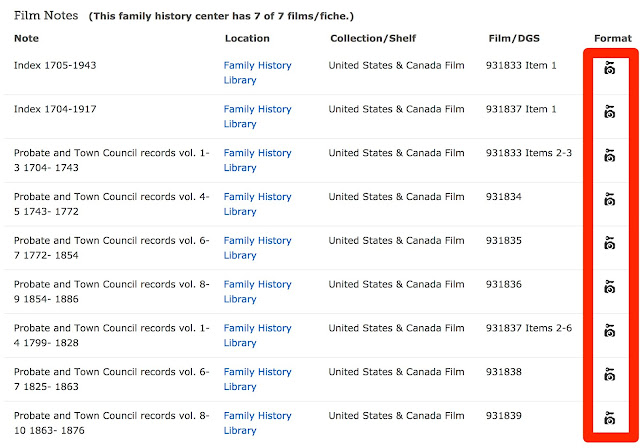 Yes, I still have to plug in my "wireless" charger.
Posted by James Tanner at 7:02 AM