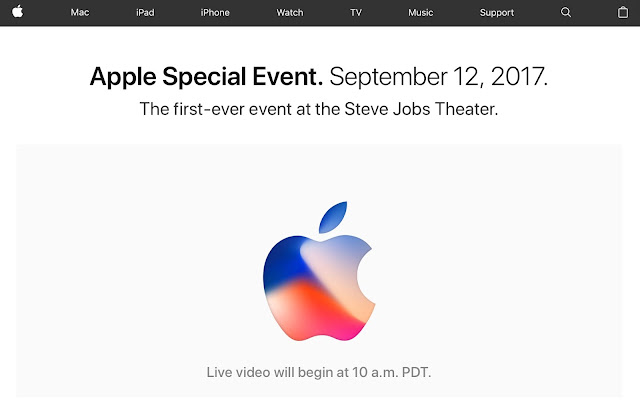 Apple's announcements of new products have become a worldwide news event. They are also an example of picky infighting among the large technology companies. For example, the Apple Special Event on September 12, 2017, could only be viewed by using either the Safari browser or the Microsoft Edge browser. All other browsers were blocked including Chrome and Firefox. I believe that this carries Apple's smug superiority a little too far. This is true even for me a dyed-in-the-wool Apple aficionado.

That said, I am always fascinated by the vast improvements in the technology that seems to leap ahead every time there is a major announcement by one of the large technology companies. In this case, the iPhone X is a prime example.


This new iPhone has an A11 Bionic chip with 64-bit architecture. Quoting from a ZDNet.com article entitled, "Inside Apple's new A11 Bionic Processor:"


The A11 Bionic - yes, that's its real name - is a 64-bit, 6-core processor (two performance cores, and four high-efficiency cores) that Apple claims is the "most powerful and smartest chip ever in a smartphone."

Translating that into English, it means that the new iPhone X is likely a much more powerful computer than the one you are using on your desktop today, not to mention your laptop.

What does this mean for genealogists? One obvious answer is that your computer and smartphone just got another major step out-of-date. The new iPhone 8 and the iPhone X are also coming out with an upgraded iOS version. This means that older devices may be on their way out through an inability to upgrade either with this iOS upgrade or one to come. But older devices will certainly not be able to take advantage of many of the new features.

Genealogists are really at the tail end of these kinds of technological advances. But some of us do use smartphones and will benefit from the changes in technology. Some things, like the improvements in the smartphones' camera quality, have an immediate impact on some of our activities, but other most of the other developments will only have a future trickle down effect. For more information about the iPhone X see Apple.com.
Posted by James Tanner at 4:20 AM