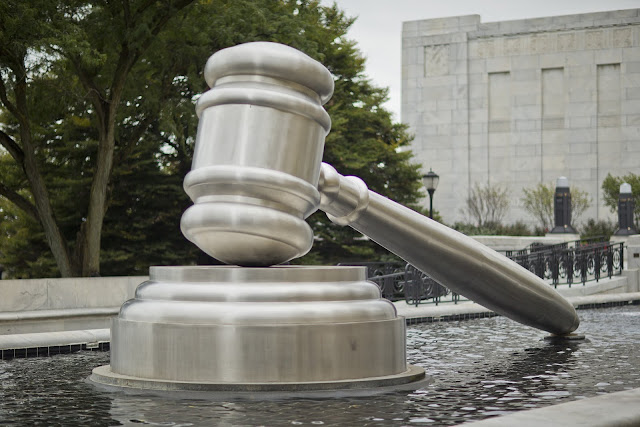 This post isn't really series, but from time to time, I address any legal changes that may affect the genealogical community. Sometimes a random court decision about a case that seems to have no relevance to genealogical research or anything else becomes a deal changing blockbuster. The latest controversy involves a case from the United States District Court for the Southern District of New York. 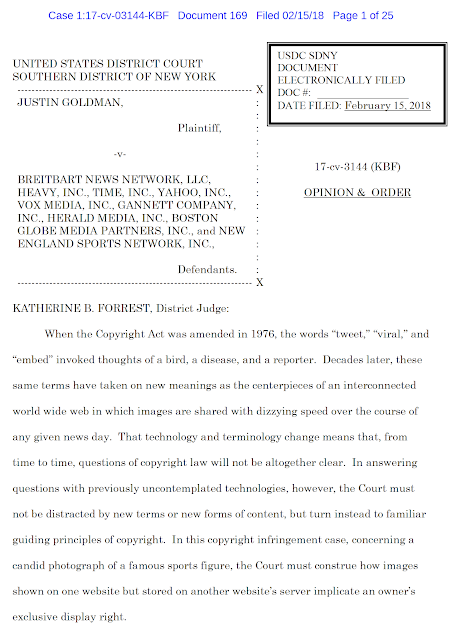 The case citation is as follows:

Here is the court's own summary of the facts which includes a footnote.


On July 2, 2016, plaintiff Justin Goldman snapped a photograph of Tom Brady (the “Photo”), Danny Ainge, and others on the street in East Hampton. (ECF No. 149, Goldman Declaration (“Goldman Decl.”) ¶ 2.) Shortly thereafter, he uploaded the photograph to his Snapchat Story.1 (Id. ¶ 5.) The Photo then went “viral,” traveling through several levels of social media platforms—and finally onto Twitter, where it was uploaded by several users, including Cassidy Hubbarth (@cassidyhubbarth), Bobby Manning (@RealBobManning), Rob H (@rch111), and Travis Singleton (@SneakerReporter). (Id. ¶ 6–10; ECF No. 120, Defendants’ Statement of Undisputed Facts Pursuant to Local Rule 56.1 (“Defs.’ 56.1 Statement”) ¶ 28.) These uploads onto Twitter are referred to as “Tweets.”

1 Snapchat is a social media platform where users share photographs and messages; a Snapchat story is a series of photos a user posts—each photo is available for twenty-four hours only.

Defendants in this case are online news outlets and blogs who published articles featuring the Photo. Each of defendants’ websites prominently featured the Photo by “embedding” the Tweet into articles they wrote over the course of the next forty-eight hours; the articles were all focused on the issue of whether the Boston Celtics would successfully recruit basketball player Kevin Durant, and if Tom Brady would help to seal the deal.

It is undisputed that plaintiff holds the copyright to the Photo.

The key to understanding this controversy is that the photo was undeniably subject to a claim of copyright and then used by commercially oriented websites without a license or even the courtesy of attribution.

The court goes on to examine the process of "embedding" a photo in an HTML document. To make this part of the case as simple as possible, the photo at the beginning of this post is "embedded." All that means is that it is used in the context of this post and copied here by reference to another copy of the same photograph. By the way, the photo above is in the Public Domain and not subject to copyright claims.

Apparently, the defense raised was that no actual "photo" was copied and that the "original" was never used. This is a pretty lame defense from my perspective. I would probably have claimed that the "viral" photo had passed into the public domain by virtue of the fact that the "author," here the photographer failed to take steps to protect his copyright from use by millions of people. He could have watermarked his photo with a claim of ownership, for example.

This case has implications for anyone who copies a copyrighted photo because, at least in this early phase of the litigation, the court did not discuss the issue of abandonment.

The discussion by the Judge is a good summary of the status of U.S. Copyright law as it relates to technology such as the internet. However, many of the statements quoted by the Court demonstrate the lack of sophistication of the various judges who are quoted.

It should also be noted that this lawsuit is far from over. The order referenced above is only a decision on part of the case and the final decision or judgment of the court is still a long way off. After the decision is made, the parties could always appeal to the Court of Appeals and ultimately the U.S. Supreme Court.

If this case is finally decided on the basis of the reasoning set forth by the Court, it will become a landmark decision and a very good reminder to all of us to be extremely careful when copying and using content from the internet.