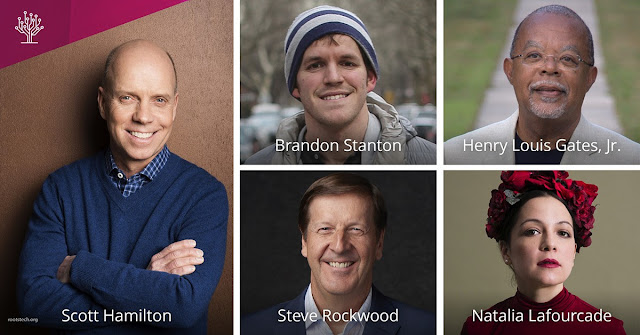 #RootsTech 2018 with its lineup of Keynote Speakers is coming at the end of this month. I am already having withdrawal pains from not being able to attend the Conference in person, but you can avoid having the same pains of remorse by registering and attending in my place. You can register by clicking here.

One of the highlights of #RootsTech 2018 will be those speakers shown above. Here is more information about each one.


RootsTech 2018 kicks off Wednesday, February 28, with the latest in DNA genealogy classes and other popular topics and a keynote by Steve Rockwood, CEO of FamilySearch International. Brandon Stanton, a world-renowned photographer and storyteller, will then take the stage March 1 to share his remarkable gift of photographing and sharing people’s stories on his website, Humans of New York. Stanton’s art focuses on everyday people—illustrating that every life has an important story. The website and associated Twitter, Facebook, and Instagram posts led to his two New York Times bestselling books.

Scott Hamilton, hailed as one of the greatest male figure skaters of all time, will address the crowd on Friday, March 2. His skating prowess won Hamilton an Olympic Gold Medal, World and US Championships, and induction into both the United States Olympic and World Figure Skating Halls of Fame. Hamilton is a cancer survivor, career TV broadcaster, author, motivational speaker, and—most importantly to him—husband and father.

Saturday, March 3, Henry Louis Gates, Jr., will share his experiences in documenting genealogical and anthropological finds on film and African-American research. Gates is perhaps best known for his current role as host of Finding Your Roots, his groundbreaking genealogy series on PBS. This Emmy Award-winning filmmaker has created 18 documentaries, PBS productions, African American Lives 1 and 2, and documents the lineage of more than a dozen African Americans using genealogy and DNA; Faces of America, a four-part genealogical series, explores family histories of twelve diverse North Americans; and his six-part, The African Americans: Many Rivers to Cross, won multiple prestigious awards.

Natalia Lafourcade, internationally recognized singer, songwriter, and one of the most successful singers in the Latin America pop rock genre, will also keynote on Saturday, March 3. She is perhaps most known recently as the voice in the closing credits of the hit Disney movie Coco singing the popular song “Remember Me.” Lafourcade, who has captured hearts all over Mexico and in countries around the world, will share her musical talent and love for family on the RootsTech stage.

This year, all of my friends at The Family History Guide will have a prominently placed booth on the Main Exhibit Floor. Take some time to visit the booth and learn something about our fabulous learning tool. I am also sad that I will miss talking and teaching about our website.

If you are wondering where I am, go to my other blog, Rejoice, and be exceeding glad... and read about our experiences at the Maryland State Archives.
Posted by James Tanner at 4:14 AM