From Whence and to Thither -- Understanding Migration Patterns: Part Six 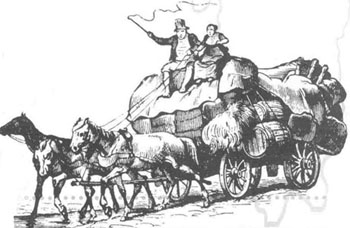 It is important to not get confused by the terms "immigration," "emigration," and "migration." Immigration is the movement of the people coming to live permanently in a country that is foreign to them. For example, someone coming from Ireland or Denmark to the United States. Emigration is the opposite term used to refer to people leaving a country. When you emigrate from your native country, you become an immigrant in the country of your arrival. Migration is used to refer to any other population movements and is a more general term that encompasses immigration, emigration, and movement within a country. Unfortunately, the terms are often confused and sometimes used interchangeably.

Under these definitions, for example, people coming from England (the United Kingdom) during British Colonial times were not immigrants. They were simply moving from one part of their own country to another part by crossing an ocean. On the other hand, the earliest Mormon pioneers were immigrants because the left the United States and went to Mexico.

I have been focusing on the movements of the people within the confines of what is now the continental United States. It is not that other migrations are not important for genealogical research, but I am using the American example because it is, for me, the easiest one to illustrate.

Returning to the Tanner family, we now find my direct line ancestors living in New York around the turn of the century from the 1700s to the 1800s. In moving from Rhode Island, they were joining hundreds of thousands of their fellow Americans in a movement from the other colonies to New York state that occurred just after the Revolutionary War ended. At the same time, the flood of immigrants from Europe was beginning to make the cities along the Atlantic coast some of the largest in the world.

My Third Great-grandfather, John Tanner, moved from Southern New York state to settle along the huge lake known as Lake George were he became a very prosperous farmer and businessman. This movement was essentially from a settled part of the country into, what was then, the wilderness. It is over 200 miles to the northwest of the town of Hopkinton, Rhode Island where he was born. The migration pattern, at this time, was to the west and north. Why was that?

In the case of the Tanners, the younger men likely left because of the inheritance practices in effect at the time. The oldest son usually received the bulk of the inheritance, leaving the younger sons without much of an inheritance, i.e. farmland or whatever, to become self-sufficient. John Tanner's father was Joshua Tanner and the youngest son of his father Francis. The older Tanner men stayed in Rhode Island when Joshua and his family moved north. The lack of an inheritance, plus the availability of open land, was a strong incentive to move into the wilderness.

Now, if you are researching your American ancestors, would the fact that so many people moved from the seaboard colonies (states) into the interior help you to understand where to look for your ancestors? In the case of the Tanners, the research connecting John Tanner's family to Rhode Island from New York was done in the early 1900s. But until recently, no serious research had been done about the family in Rhode Island.

When you begin to speculate about your family's movements, be sure to remember to check that there was a way to travel and that the time it took to travel was reasonable. More about this to come.

Now, what about the movement from Rhode Island to the Lake George area? Why north and west? Look at a map. Then, think about the time period. At the end of the revolutionary war, travel north and south along the East Coast was becoming easier due to roads becoming established. But if you look at a topographical map of the U.S. you will immediately see that that there is a significant mountain range just back from the coast. Here is an example from Google Earth. 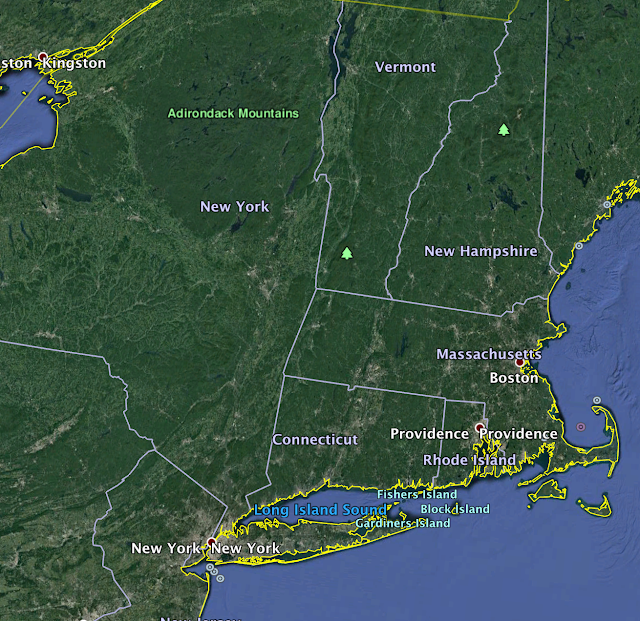 So where were the roads or travel corridors? Here is the same approximate area with the current roads from Google Maps.