From Whence and to Thither -- Understanding Migration Patterns: Part Five

Technically, you could start researching migration patterns in North America back in the earliest prehistoric times. But as I pointed out earlier, for genealogists the main interest lies in tracking our ancestors from the time of European settlement. Before the Industrial Revolution and the subsequent development of mechanized transportation, Movement across the country was limited to the speed of a person or a draft animal such as a horse or ox. Obviously, the first European settlers arrived along the coasts and migrated to the interior.

My own surname family, the Tanner family, is a good example of the kind of migration that occurred from their arrival in about 1680 until the present time. The original immigrant, whose name is known to be William Tanner, may have arrived in what is now Rhode Island or possibly Massachusetts in the late 1600s. Following my direct line, his son, Francis Tanner, lived and died in the relatively small area of Rhode Island. His son, Joshua Tanner, migrated north and west to Washington County, New York. Tax records in Rhode Island show that his family left Rhode Island around 1800 and death records indicate that he died in Reeds Corner, Washington, New York in 1807. The questions that arise as this information is found in the records include the usual how, where, why type questions. Here are a few of those types of questions.

But more importantly, we need to understand why answering these questions and others that may arise, is important to our genealogical research efforts. Here is a quote from the FamilySearch.org Research Wiki that begins the explanation of my ancestors' move to New York State.

Before 1775 settlement in New York was confined to the Hudson, Mohawk, Schoharie, and Delaware valleys until after the Revolutionary War. During and after the war, New Yorkers loyal to the King of England emigrated to Canada and elsewhere. The Revolutionary War temporarily halted further expansion into the interior. Once the war was over and the title to western lands was obtained from the Iroquois in 1786, New Englanders flocked to all parts of the state. In the two decades after the war, 500,000 new settlers came into New York, and the state tripled its population.

Because of the time period when the Tanners moved to New York State, they traveled with wagons, by horseback and by walking. This move was not made in a vacuum. Further research shows that many of the Tanner relatives and others from Washington County, Rhode Island moved to the same area of New York State. Quoting from my daughter Amy Thiriot's blog, TheAncestorFiles, she relates how she determined that other related family migrated to the same area. The post is entitled, "Finding Thankful, Joshua, and Tabitha"

A distant cousin and local farmer, Oscar W. Tefft (1865-1934), drove around and cataloged all the old burial plots tucked into corners of area farms. Oscar was very interested in family and local history. He helped with the research for the book The Tefft Ancestry (Stocking, 1904).

When he drove up and down the old farm roads and highways in 1917, the burial locations he found had between one and a couple dozen headstones as well a variety of graves marked only by slates.

Here is a copy of the pertinent page from the book. 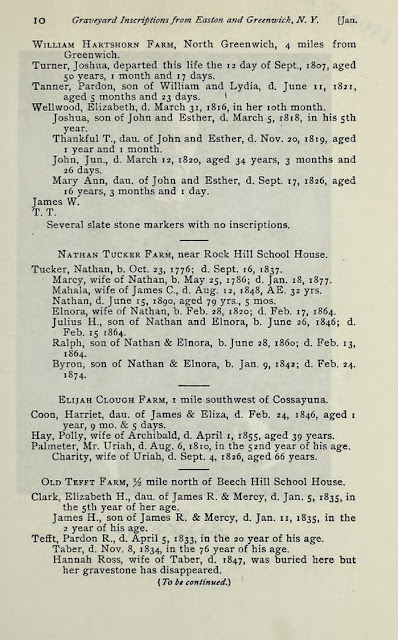 
Several months ago, Karen Bray Keeley noted on Family Tree that Joshua Tanner was buried in the William Hartshorn Farm Cemetery. She had seen the name "Joshua Turner" and recognized that the other burials in the small cemetery were Joshua and Thankful's grandchildren, so "Turner" was a misreading of Tanner, and now thanks to Karen we know where Joshua is buried.

I saw her note on Friday and although she used one of the secondary sources it was enough to find the original list.

As I read through the lists, many names were familiar: Tanner, Tefft, Barber, Kenyon. Since so many Tanner relatives migrated in great waves from Washington County, Rhode Island, to Washington County, New York, these families lived and died within miles of each other.

If you understand that about half a million people from the early New England colonies migrated to New York in the last two decades of the 1700s and you had a relative who "disappeared" from one of the other colonies or states, you could begin looking in New York.

I will continue with the discussion of what happened with the Tanner family migrations in a subsequent post.


You can see the earlier posts in this series here: