From Whence and to Thither -- Understanding Migration Patterns: Part Nine 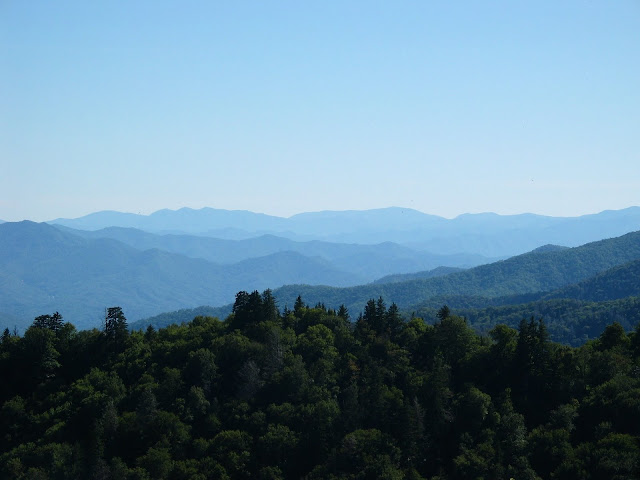 Coming from the west, especially if you have lived in the Rocky Mountain states, you will not be much impressed with the "mountains" in the east. but historically, the interior mountains along the eastern part of North America were an imposing and difficult barrier to westward expansion. As I previously mentioned, the first settlers to cross the Appalachian Mountains were entirely unknown until early in the 1700s. Because of this vast 1,300 mile long mountain range, early settlements moved north and south rather than west.

In 1746, a group of Virginia investors formed The Ohio Company, based on land speculation to promote the sale of lands in what is now the State of Ohio. However, a major deterrent to western colonization was the threat imposed by Native Americans and later by the French. The conflict, usually referred to as the French and Indian War, was part of the Seven Years War between Great Britain and France. The war came about, in major part, because of the conflict between the British land speculators and the French traders. The War lasted from 1756 to 1763. Before and during this long war, travel into the interior was dangerous. Quoting from the Wikipedia article on The Ohio Company:


In 1749, the British Crown granted the company 500,000 acres in the Ohio Valley between the Kanawha River and the Monongahela. The grant was in two parts: the first 200,000 acres were promised, and the following 300,000 acres were to be granted if the Ohio Company successfully settled one hundred families within seven years. Furthermore, the Ohio Company was required to construct a fort and provide a garrison to protect the settlement at their own expense. But the land grant was rent and tax free for ten years to facilitate settlement.

Looking to the north, settlement in the area of Canada was facilitated by the Great Lakes and their connection to the Atlantic Ocean along the St. Lawrence River. Likewise, the area west of the Appalachians was open by means of the Mississipi River system. The French settled Quebec in 1608 and New Orleans in 1718 and it is always helpful to remember these dates and the date of the Louisiana Purchase which did not occur until 1803 when the French had been in America for almost 200 years.

Another date to remember for migration is the traditional date of the beginning of the Revolutionary War in 1776. Those people who remained loyal to the British cause were called Tories, but this name was not very accurate because the Tory Party in Great Britain had been in existence since around 1678. The name was applied by the revolutionaries to the anyone who was loyal to the British Crown. By the end of the War, it is estimated that up to 70,000 of these Tories or Loyalists fled from the young United States to Great Britain or Canada. Additionally, southern Loyalists moved to Florida and some moved out into the Caribbean British possessions.

For more information see the following list of books:


Myers, Theodorus Bailey. The Tories, Or, Loyalists in America Being Slight Historical Tracings, from the Footprints of Sir John Johnson and His Contemporaries in the Revolution. Albany [N.Y.: Press of J. Munsell’s Sons, 1981.


Phelps, Richard H. A History of Newgate of Connecticut, at Simsbury, Now East Granby: Its Insurrections and Massacres, the Imprisonment of the Tories in the Revolution, and the Working of Its Mines : Also, Some Account of the State Prison, at Wethersfield. Salem, N.H.: Ayer Co., 1984.

After the Revolutionary War, immigration increased steadily and the pressure to move off of the coastal area and out into the wilderness. But the mountains still impeded settlement. As the area of the mountains was explored, passes or gaps through the Appalachian Mountains were discovered. Chief of these passages was the Cumberland Gap and the trail through the gap known as the Wilderness Road. The Cumberland Gap was utilized by another land speculation company called the Transylvania Company and in about 1774, the Company hired Daniel Boone to blaze a trail through the Cumberland Gap into what was called Kentucky. See Wilderness Road. Two other lesser known gaps were the Kane Gap and Moccasin Gap. There is now a Cumberland Gap National Historical Park.

By focusing genealogical research on the movements of early American ancestors, a researcher can begin to correlate their movements with historic routes. It is also important to take into account the various land promotional or speculative organizations that were formed to sell land in the west.