$25,000 in prizes at #RootsTech Innovator Showdown

FamilySearch.org has announced the details of the Innovator Showdown to be held during the RootsTech Conference in Salt Lake City, Utah on Friday, February 13, 2015 at 10:30 am in Hall D of the Salt Palace. This new event is described by FamilySearch as follows:


New to RootsTech in 2015 is the Innovator Showdown. Innovator Showdown is an event where entrepreneurs from around the world present their web or mobile app on stage to a panel of judges and live audience. Up for grabs is $25,000 in sponsor contributed prize money (see sponsors below) to whoever the judges, and audience, think is best. This event will be held in the keynote hall on Friday, February 13 at 10:30 am.

The 4 finalists will present their ideas in 5 minutes and respond to questions from a panel of renowned judges (see page 4). The judges will pick their 3 favorites and award the winners from $3,000 to $10,000. In addition, the audience will get to choose their favorite finalist through text voting on the spot. Their selection will win a People’s Choice Award of $5,000. Attendees in the keynote hall and those watching live at RootsTech.org will also determine through text voting which finalist walks away with the grand prize. This will be big!

Darin Adams, former KSL Studio 5 host and professional speaker will be the master of ceremonies for the Innovator Showdown.

Here is a screenshot of the Semifinalists: 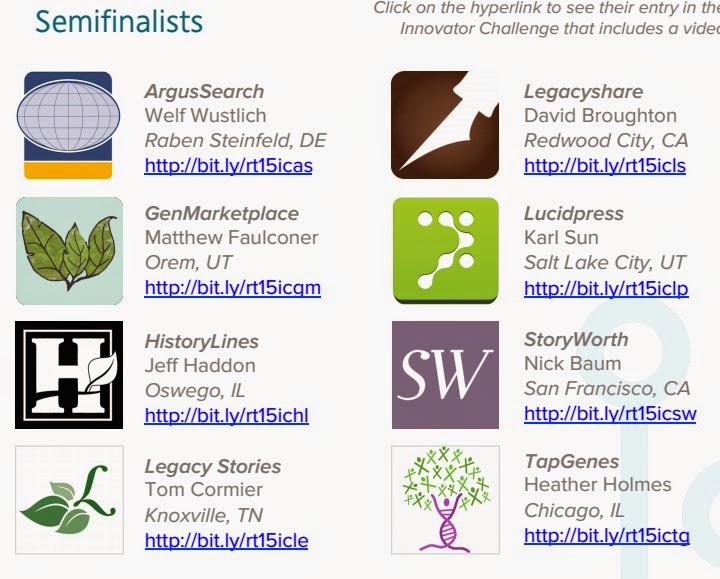 If you wish to preview any of their products, here are the links:

Email ThisBlogThis!Share to TwitterShare to FacebookShare to Pinterest
Labels: RootsTech