Genealogy is not a disease

I suppose the title to this post can be taken several different ways. But lately, I have been getting the impression from many that I talk to that genealogy is not just contagious, but contagious in a bad way. This is partially understandable from genealogy's checkered past, but most of the people with that attitude are not aware of any of that history. If I were an expert on "local history," I would have an "honored" place in the community. But as a genealogist, I am something of a pariah. Arizona has had an Official State Historian for years. But can you imagine an official state genealogist?

One definition of a disease is a particular quality, habit or disposition regarded as adversely affecting a person or group of people. When I talk to people about what I do, they have varied reactions and casual interest can be said to be one of them. However, many people react adversely. They are completely unsure how to treat a person who does something so strange as genealogy at all, much less all the time. Although I can think of several adverse effects of genealogy, I am not so sure that other popular activities don't have similar adverse consequences.

From time to time, some prominent person, usually involved in genealogy as a business, makes a comment about the "popularity" of genealogy, a subject I have written about several times over the past years. From my perspective, it is popular only so long as someone else is doing it. I looked back an it has been some time since I brought up this subject, so I decided to look into genealogy's popularity again to see if there have been any changes over the past year or so.

One place to begin such a search is the Pew Research Center. The Pew Research Center is "a nonpartisan fact tank that informs the public about the issues, attitudes and trends shaping America and the world. They conduct public opinion polling, demographic research, media content analysis and other data-driven social science research. They do not take policy positions." See About Pew Research Center.  So, I did a search on their website to see if they had anything to say about genealogy. I did find the topic mentioned in several studies, but the most recent of these seemed to be back in 2012 and the only study I could find that talked about the popularity of genealogy was one from 2011 about how the Internet is used in groups. See The Social Side of the Internet, Section 3: How the internet is used in groups - and the rise of social media and texting in group activities. The context of that mention was in a long list of online activities that comprised only 8% of the total study group. Here is the quote from the report: (see if you can find the mention of genealogy)

Another study from the PewInternet, Pew Internet and American Life Project, was entitled Libraries, patrons, and e-books, Part 4: How people used the library in the past year. This study was in 2012 and found that 56% of the respondents 16 years of age or older had used a public library during the past year. That study found the following:


Access historical documents or archives or genealogical records: 25% of Americans ages 16 and older used their library in the past year to do so. African-Americans are more likely than others to have done this: 29% used the library this way, compared with 23% of whites and 19% of Hispanics.

That is 25% of 56% of the study group or about 14%. That is interesting. But there is nothing in the study to separate out genealogical investigations from access to historical documents or archives.

I found a couple of studies about genealogical interest going back as far as 1993, but since I was looking for current trends, I decided to look further. However, I did find a number of references to a comparison between to polls one taken in 2000 and another in 2005. See the Ancestry.com press release "Americans Fascination with Family History is Rapidly Growing."  This article cites a study by Marketing Strategies Inc. and another poll by Maritz.

Both of these polls were widely quoted. So, I decided to try and find the results from either or both. I made this attempt previously back in 2013 when I wrote about genealogical myths. A search of the Market Strategies International website did not reveal a copy of the study which was commissioned by Ancestry.com.

The second organization is referred to as Maritz. This study is also referenced in the Ancestry.com article reference above. I found several links to the study were no longer available. The company cited is apparently Maritz Research. Neither of these two websites had any reference to a study of genealogy's popularity.

So what else? In the past, I have looked at Google Trends for some indication of a change in the popularity of genealogy. Here is the graph for searches on the term "genealogy." 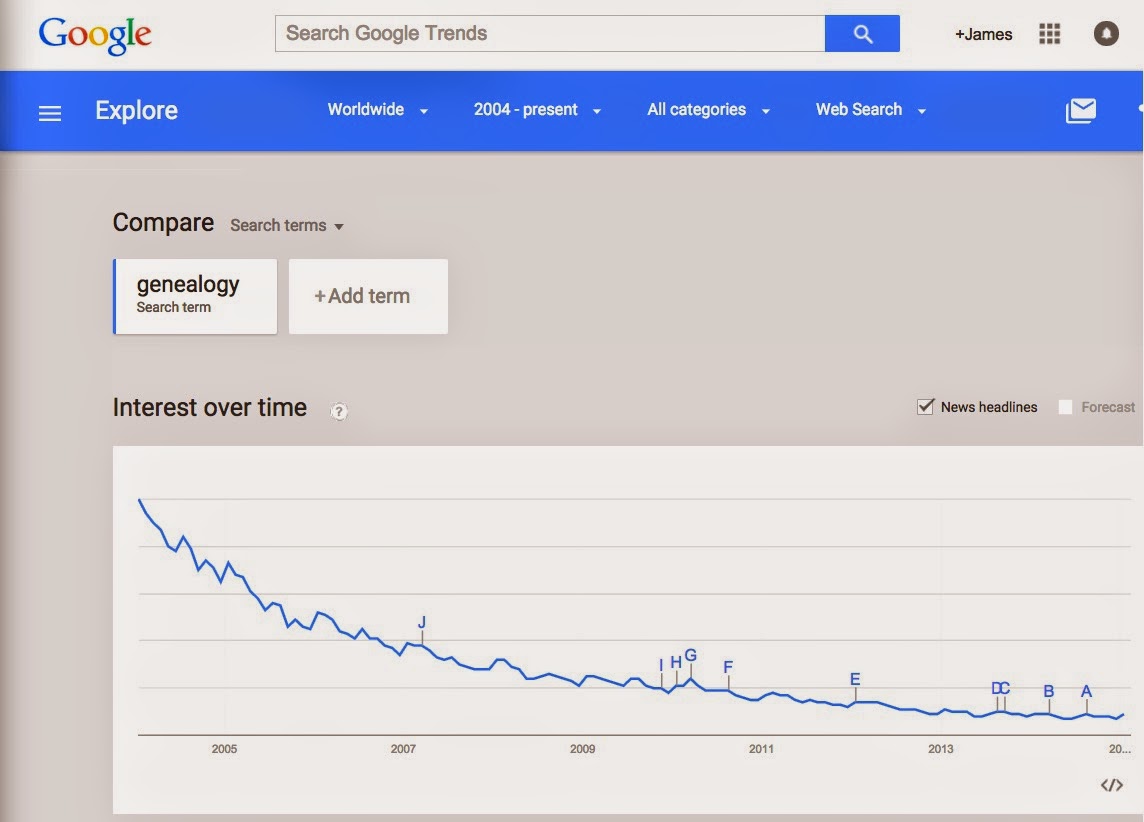 Most of this decline can probably be attributed to the overall increase in the use of the Internet. But you can see that genealogy was a much bigger proportion of the search traffic back at the time that the various studies were done. What about searches for family history: 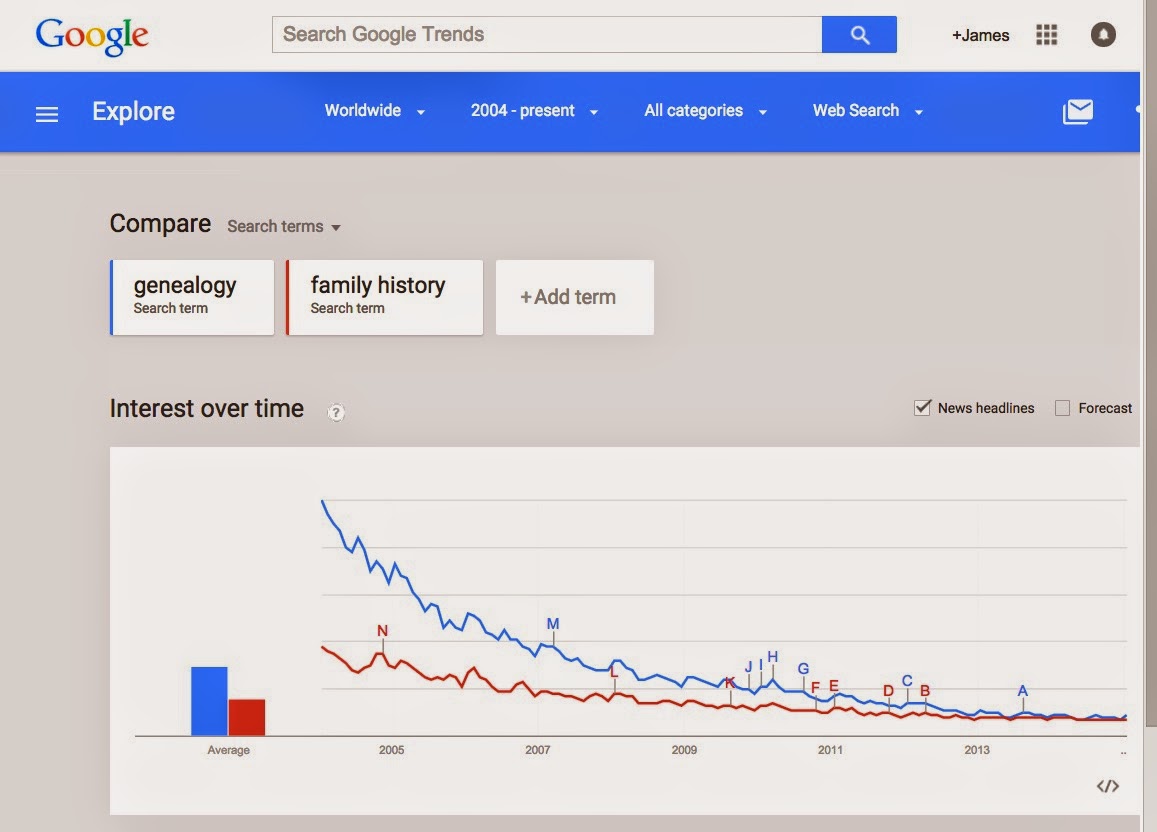 Genealogy is in blue and Family History is in red. Not much change from the last time I did this type of search. In the next graph, I added terms such as "ancestry" and "FamilySearch." 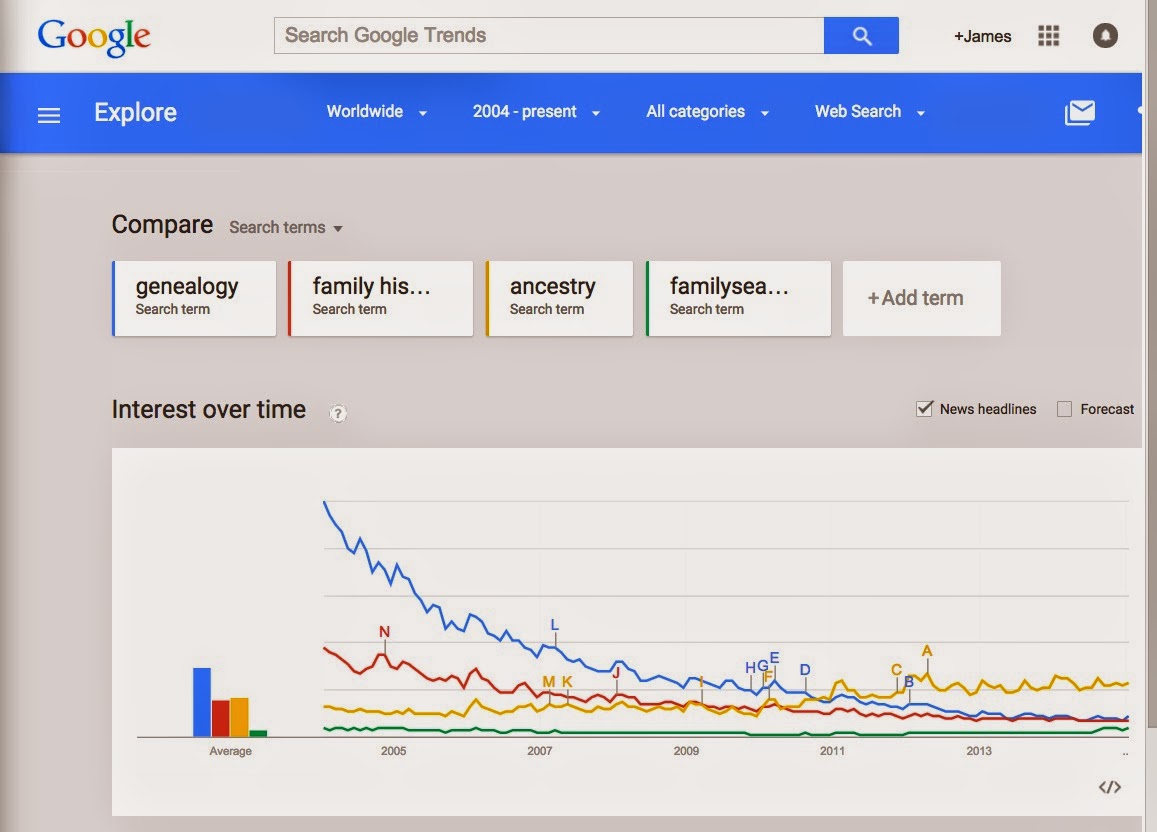 We just finished another football season with the Super Bowl, what about a search on that topic? 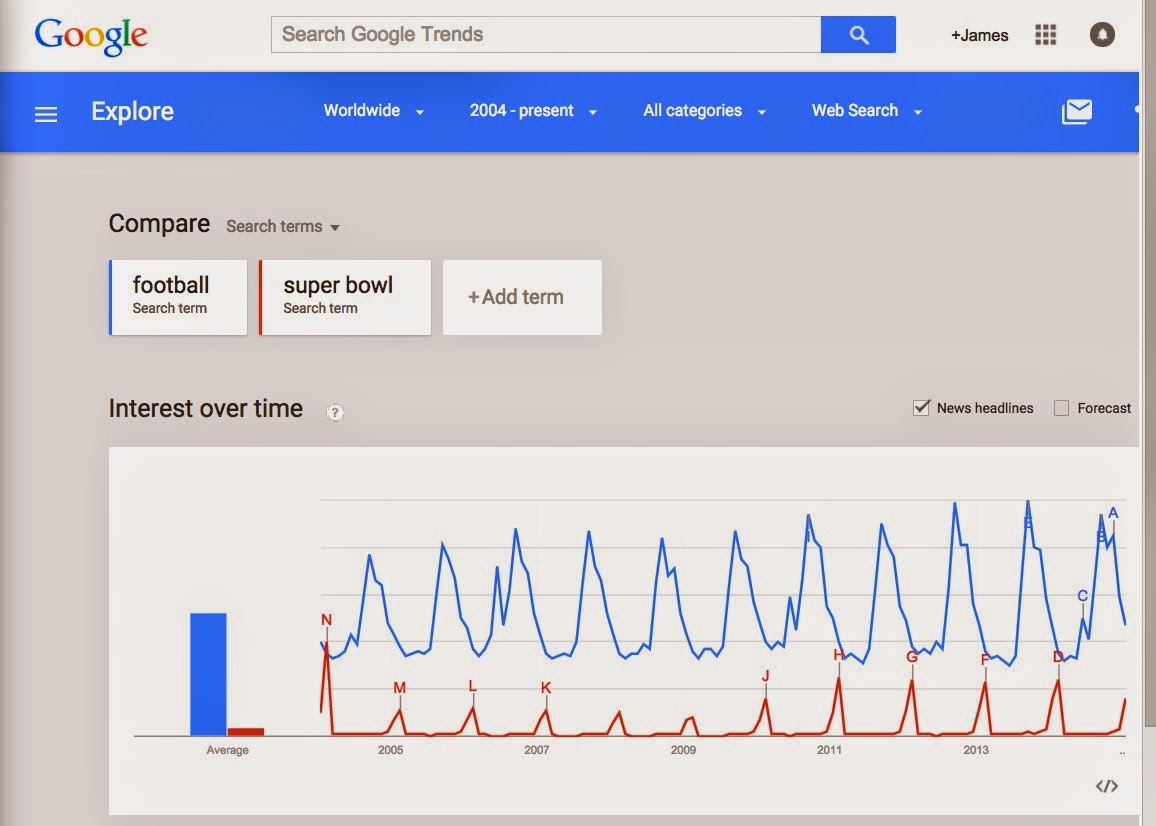 This shows that football is very predictable and cyclical. I could go on with other searches, but they would merely show that there is a dramatic difference between interests in sports and other activities and genealogy.

Back to the question in the title to this post. Genealogy is most certainly not a disease. However, it is not nearly as popular as those who promote the subject would like us all to believe. However, why do we think that genealogy has to be popular? I don't really care if anyone else is interested in what I am interested in. I am certainly willing to teach, help, assist, explain and promote, but my interest has nothing at all to do with popularity. Do we really want genealogy to be the popular thing to do? We are thankful for support, but perhaps we should be just as thankful we are left alone to do what we like to do.

A parting note. This past week, Salt Lake City, Utah was host to Comic Con FanX. According to news reports the event was sold out with 50,000 people attending the conference. In 2014, the event was mobbed with 120,000 participants. Just an observation.
Posted by James Tanner at 7:39 AM

Email ThisBlogThis!Share to TwitterShare to FacebookShare to Pinterest
Labels: Commentary